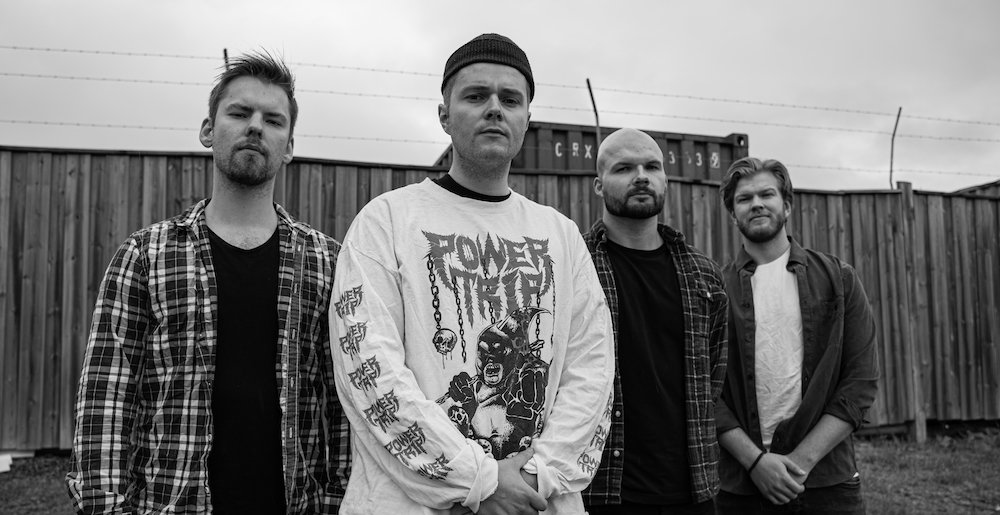 So often, progressive metal, even progressive death metal, can feel just a little clean. It’s not about distortion, but intent, like the musical wizards behind them are only about using their powers for good. But Norway’s Hypermass somehow straddle the line between sounding buoyantly proggy and evil as hell. The result is a kind of bouncing, gleeful venom that makes the listener think of something between the death metal zombie and the prog alien, a fleshy thing from beyond the stars that could’ve been dreamt up by both Obscura and The Black Dahlia Murder.

The band’s new track “The Degenerate Strain” is their sonic sweet spot chiseled to a point and jammed in your neck. The track’s guitars are straight-up delicious prog, and the gang vocals on the chorus remind one of the flames around something as it re-enters Earth’s atmosphere. But vocalist Markus Sundet has an awesomely rabid howl, and his vocal rhythms give the whole track the death metal punch it really needs. As a result, this track fucking rules, and is nearly impossible not to bob along to.

Says Sundet about “The Degenerate Strain:”

“The process of writing ‘The Degenerate Strain’ went very smoothly. For me personally, the mission behind the process was to get the perfect chorus for the song. The goal was to make the band sound as grandiose as possible — something I think we did well. The song works as a good single for the album, although the album offers a lot of variety. But this is definitely a good song to start the release with.”

“This song came as a wildcard at the end of the writing process. The album had been done for months, and we were confident that it was a wrap. Then one night, where everyone was present, we were messing around with this sliding rock n roll style riff, reminiscent of driving down the highway in a convertible with the roof off. This turned out to be the main riff. The rest of the song fell into place in a span of about three hours – it pretty much wrote itself. I think most musicians can relate to those special moments when a song just gets shat out of nowhere. Those are usually the most promising cuts.”

Listen to our exclusive premiere of Hypermass’ “The Degenerate Strain” below. The track comes from an album due out later this year, but that’s all we know.

Metal Sucks Greatest Hits
0 -
Teenage Environmental Activist Greta Thunberg’s UN Speech Turned into a Swedish Death Metal Song
0 -
12 Embarrassing Albums That Everyone Owned Back In The Day
0 -
Video: Vocalist Performs Ten Styles of Metal, Complete with Appropriately Silly Lyrics
0 -
BREAKING: Joey Jordison Back in Slipknot as Percussionist!
0 -
A MetalSucks Exclusive: Return from The Graveyard — King Diamond on His Near-Death and New Life
0 -
The Secret 2 a Successful Career in Music