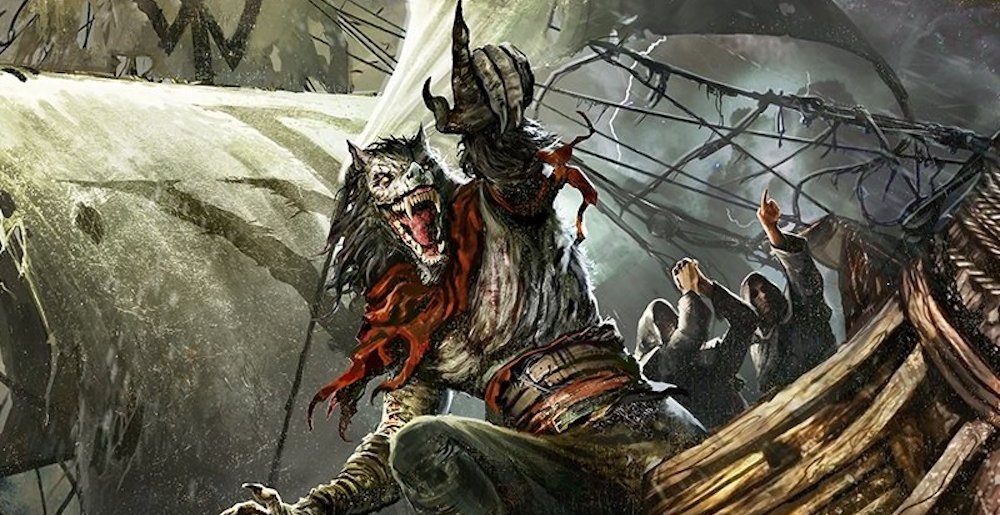 For a nerd like me, watching Powerwolf do as well as they have is really exciting. That a German power metal band whose music is primarily about werewolves, vampires, and the eternal war between the two can be as huge and beloved as they are is just awesome, even if it’s unexpected. Now, the band have brought together the timeless combination of the moon and the tides, having released what we consider the ultimate werewolf pirate anthem.

Less than a year since the release of their latest album Call of the Wild, the band have dropped their new track “Sainted By The Storm,” which in classic Powerwolf fashion appears to be a song about a ship full of cursed sailors riding into a massive gale with only their dark hearts to guide them. Is this a progressive, brain-twisting experimental metal track? Heeeell no, it’s a festival-ready power metal song about supernatural adventure on the high seas! These guys never promised you a rose garden, and if they did, the roses would wilt as they passed, because if we haven’t made it clear, they are fucking werewolves.

Say the band of their new single:

“We would like to thank you all for your fantastic support with the release of a brand new song! It’s been less than a year since we released our new album “Call Of The Wild” and it’s rather unusual for us to follow up so soon, but we miss you all and were overwhelmed by your comments and feedback not only on the last album but also on our streaming event ‘The Monumental Mass,’ despite the lack of live shows and the opportunity to see each other again and celebrate a furious metal mass together! Enjoy ‘Sainted By The Storm,’ this one is for you, wolves!”

Get “Sainted By The Storm” below:

Meanwhile, European fans can catch the band alongside Dragonforce at one of the dates below:

Powerwolf is coming to our neck of the woods.

Powerwolf’s new album, Call of the Wild, is out Friday.

The band’s new album, Call of the Wild, is out next month.

Metal Sucks Greatest Hits
0 -
Why There Will Never Be Another Metal Band as Big as Metallica
270 -
Exclusive Band Meeting Transcript: Morbid Angel Decide to Release Illud Divinum Insanus Remix Album
0 -
What Will Happen When a Member of Metallica Dies?
0 -
New Candidate for Most Metal Wedding Ever: Bride and Groom Shred Down the Aisle
0 -
Video: A Young Mr. Bungle Play Their High School Talent Show
0 -
Ten Reasons Why Record Labels Are Still Important