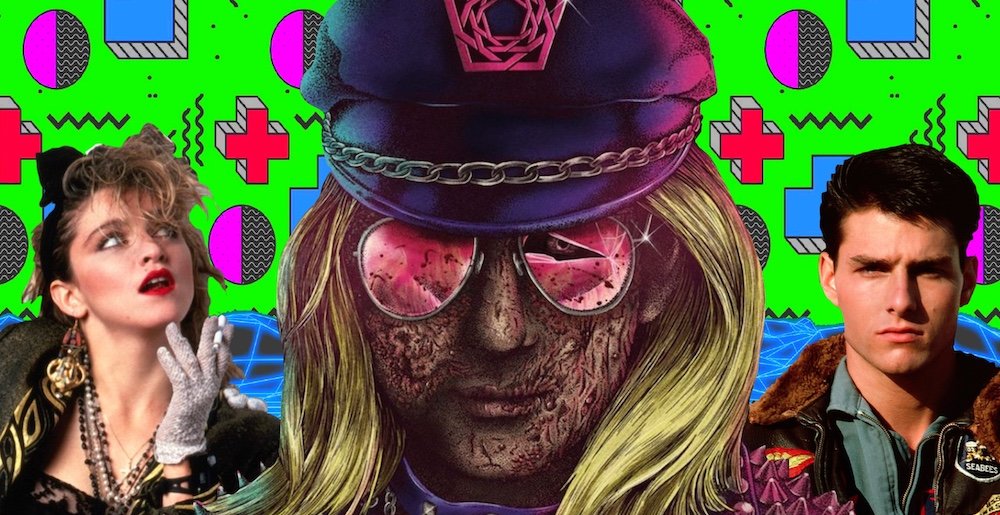 Most folks associate loving the ’80s with neon blazers, Miami Vice, and glitter out the ass…but not Carpenter Brut. The French synthwave project of Franck Hueso manages to channel the electronic heaviness and marrow-deep infectiousness of the decade through epic electronic riffs and million-ton drops. The result feels like the band’s master-of-horror namesake on Ketamine, and has made countless fans realize that they can adore the ’80s for more than just thrash and hardcore.

“I think that the emergence of synthesizers like the Yamaha DX7 have opened doors that were previously difficult to open for composers,” explains Hueso via e-mail. “Having a lot of new sounds, from different countries, in the same machine has necessarily pushed musicians to try new approaches, more ‘world music.’ And sequencers and computers made it easier to compose songs without spending long days in a big and expensive studio. It was the beginning of the home studio, in a way. More time to work means trying more things. You find that in modern metal bands where musicians do a lot of things at home now, and you feel that the overall production has improved.”

With 2018’s LEATHER TEETH, Carpenter Brüt exploded onto the scene and into the homes of countless metalheads who’d passingly heard reference to this new genre called ‘synthwave.’ This Friday, with the project’s blood-slick sequel to that album, LEATHER TERROR, Hueso is definitely taking things in a darker and shimmerier direction. All the while, the Brut has continued to double down on its love of ’80s hits, with their cover of Michael Sembello’s “Maniac” from the 1983 movie Flashdance becoming the soundtrack to many listeners’ pandemic. It was this cover that led us to ask Hueso what ’80s pop songs deserve the world’s timeless worship.

“I’ve always loved this song,” Hueso told us. “I didn’t put it in my top 10 list because everyone knows it and it was going to be an obvious one for me…For me it’s probably one of the ten best pop songs of all time. It is perfect. It’s very effective, the chorus is incredible. So I thought that to end my concerts on a positive note — and on a song that everybody had heard at least once in their life — it would be perfect. It works all the time in concert. For me, it’s the best song in the setlist. And for the little anecdote, the composer [Dennis Matkosky] was inspired by stories about serial killers, and Sembello, the singer, chose the title of the song after the movie ‘Maniac’ by William Lustig. Adrian Lyne used it while editing the movie Flashdance, but as the lyrics were a bit too creepy, the movie’s music supervisor asked Sembello to rework the song with lyrics more appropriate to the Flashdance story — and that’s how the song became so famous.”

Here are 11 ’80s pop songs that keep Carpenter Brut up all night long, all night…

“A track from the Ghostbusters OST. I could have also put ‘Self Control,’ but I had to choose one. Very efficient track, very rhythmic, very synthetic, too, but with the little crunchy guitar (a Fender, probably) to make the track kind of ‘bad boy.’ Perfect chorus and wild solo. Everything is there. I used it as a concert intro before using ‘Africa’ by Toto.”

“She’s a German singer who had made a mega hit in Europe. I don’t know if it came to the States? She is also the singer of the ’90s new age music project Enigma. Here, we enjoy all the sounds of the ’80s, the big bass, the arpeggiators, the aerial pads and the trumpets of Helm’s Deep. The chorus is a gem.”

A song that Steve Lukather did not believe in. It’s definitely a massive hit though. Obviously everyone heard it millions of times on the radio back in the days and it may have disgusted some. But a few decades later when you listen to it again you can’t help but think that it’s still a fucking hit. I’ve been using it since 2018 before I start my shows to warm up the crowd. It works every time.

“One of my favorite Depeche Mode songs. It has it all.The simplicity of the melody, its slightly dark side, Dave Gahan’s vocals and its infallible chorus. Great art. I’m an absolute fan of this band — both musically and on stage, these guys are geniuses.”

“A pop/rock song that starts directly with the chorus. It’s rare enough to underline it. There is a little vibe of The Cure on it. Rhythmic and melancholic. Not too many synths on the other hand — it remains rock. The chorus is so perfect.”

“After the intro a la ‘Lord of the Rings,’ we start on an excellent slapped bass line, so much so that it is difficult to see the link between the two parts. But it doesn’t matter — once again the chorus is impeccable and the track is rather varied with its pan flutes or these punchy synths. A song that tried new things, new musical directions, while staying within the limits.”

“Very powerful track by Madonna, with this so characteristic bass — very typical ’80s. Here, the song also starts with the chorus, which is of an incredible efficiency. Anyway, at this time, Madonna was at the top, on the same level as Michael Jackson. Not much to add on this hit, everything is perfect.”

“This band is still active, but with only one of the original members. I think they had made a mega hit with their song ‘Forever Young.’ It’s completely in the ’80s synthetic sound with ‘exotic’ additions for the time. Catchy but not too fast, just the right amount of melancholy — the elements of the ’80s hit are there.”

“I love synthetic ‘orchestral’ sounds. The ‘orchestral impact’ that is supposed to give the song an epic dimension. I don’t know how many artists, or pop bands or even hip hop bands, have used them. These sounds are so iconic and kitschy that I love to put them in my tracks, but they’re well-hidden.”

“Famous track from the Top Gun soundtrack. Very rhythmic, very American too. You can feel the differences between the English pop, a little more refined, and the American pop, a little more direct. Both are cool, don’t get me wrong — don’t start insulting me!”

“You asked for 10, but I couldn’t resist the 11th track, a bit like the numbers all go to 11 from Nigel Tufnel of Spinal Tap. This is THE hit of the ’80s! Unbeatable, must have been played a billion times around the world. It’s the most obsessive tune ever, with a melodic synth line that is so simple but so effective! Paradoxically, the simplest melodies are the most complicated to compose. Here, the whole is carried by the incredible voice of Morten Harket. Simply perfect.”

Sponsored Links from Across the Internet
Show Comments
Related Articles
My Favorite... 0
The Best Albums of 2022 So Far, According to the MetalSucks Staff
July 14th, 2022 at 12:25pm Emperor Rhombus

What a year. So far.

On their new album, the French synthwavers give us the comfort of dark nostalgia.

The synthwave kings and former The Dillinger Escape Plan frontman team up on a monstrous new track.

Metal Sucks Greatest Hits
0 -
Having a Rough Day? Try Hatebreed Motivational Posters!
0 -
BREAKING: Slipknot Guitarist Mick Thomson Stabbed in the Head by Brother
1860 -
The Top 25 Modern Metal Guitarists: The Entire List in One Place
0 -
That Time Shaun Got Drunk and Filmed a Music Video with His Cat
0 -
Eleven Useful Tips for Local/Unsigned Bands
0 -
So As it Turns Out, Banging Your Head a Bunch Can Be Bad for Your Brain