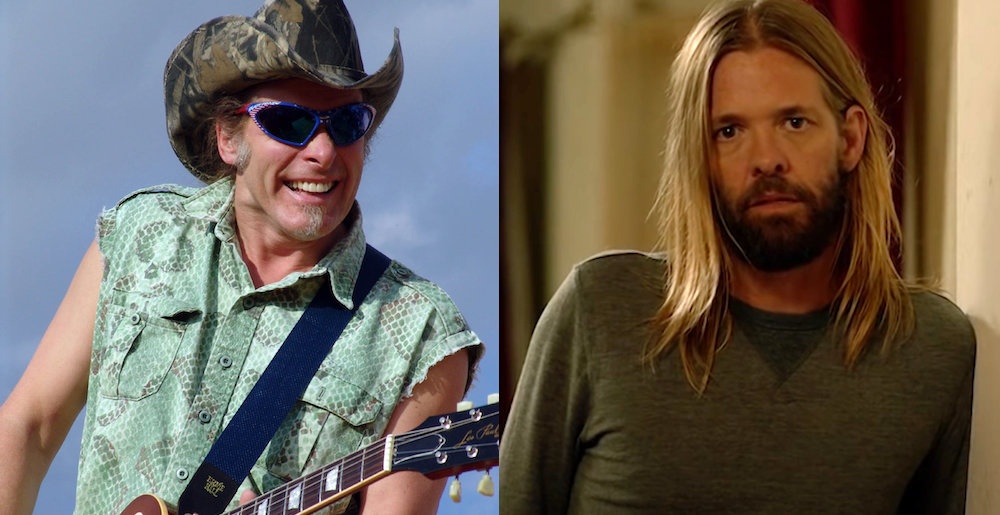 This weekend, we reported on hard rocker Ted Nugent saying that he stands in judgment over late Foo Fighters drummer Taylor Hawkins because “substance abuse is selfish.” Fans were understandably pissed off that a dude who has publicly admitted to dodging the draft and having sex with multiple underage girls would judge another musician over using drugs. Now, Ted has clarified his statement, saying that he was in fact showing “great compassion” and “great empathy” for Hawkins’ family and band.

Here’s what Ted said in his clarification, as transcribed by Blabbermouth:

“When the great drummer, and I understand he was a great, fun guy and a loving husband and a loving father, Taylor Hawkins of the FOO FIGHTERS, when he died, we did a tribute to him here on ‘The Nightly Nuge’, and I played a very emotional love song that had come out of me for my brother John when I lost him, showing great compassion, showing great empathy for the band, for his family, for his fans, showing nothing but love but identifying the intentional abuse of substances as being selfish. Well, the tsunami of attacks against me for being compassionate and empathetic and supportive and identifying a booger in someone’s nose, labeled as ‘hate speech,’ it’s unbelievable. If that speech wasn’t ‘love speech,’ I don’t know what would be love speech. But love speech sincerely and genuinely critiquing or even identifying something you disagree with or that is glar[ing]ly dangerous and irresponsible as hate speech, that’s a manifestation of total cultural abandonment of the good will and decency and genuine support for your fellow man that you and I were raised in.

“So everybody out there, speak your mind, be a critical thinker, articulate yourself honestly, and if they call it ‘hate speech,’ they’re the haters. Those who accuse us of hate speech are the real haters. And I couldn’t be more confident of that.”

Look, it’s real simple: you may think drug users are doing themselves and the people around them wrong. Anyone who’s ever been close to a drug addict knows the frustration of watching them hurt themselves and those around them. But taking a moment only a week after Hawkins died to stand in judgment over his use of…let me see…marijuana and painkillers? Fuck this dude. He’s as big a creep as you can find.

You can watch the video here if you have to, followed by the song where Nugent talks about wanting to bang a 13-year-old girl:

Metal Sucks Greatest Hits
0 -
Etienne Sin: What the Actual Fuck
0 -
Chad Kroeger and Avril Lavigne Finally Wrote a Song So Awful that the Internet Has Collectively Rejected It
250 -
Worst Year Ever: All of Our 2011 Year-End Sh*t in One Place
0 -
And Now, Here’s a Couple of Dudes Playing Slayer on Pre-School Instruments
0 -
Rigged: Wintersun
0 -
The Black Dahlia Murder’s Trevor Strnad Rants Against Music Pirates