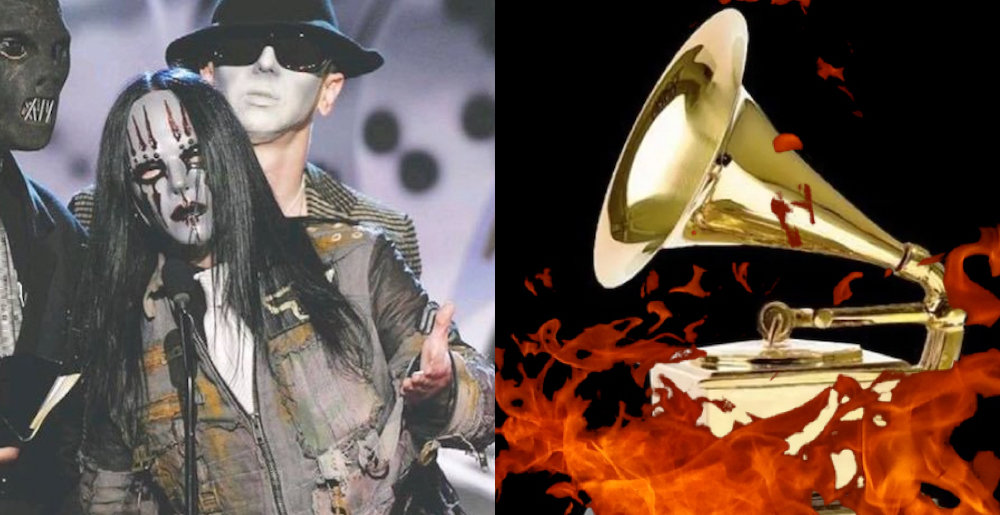 On Monday, we reported that founding Slipknot drummer Joey Jordison had been left out of the Grammys’ ‘In Memoriam’ reel, thus continuing a long tradition of the Recording Academy not giving a shit about metal’s dead icons. Now, Grammy live producer Ben Winston has done an interview with Rolling Stone in which he owns up to the snub, albeit indirectly with kind of a blanket statement.

Midway through his appearance on Rolling Stone‘s ‘Music Now’ podcast, Winston is asked about the ‘In Memoriam’ snubs, which included Joey, rapper Drakeo the Ruler, Parliament-Funkadelic’s Calvin Simon, and the victims of the Astroworld tragedy. Winston came right out with an apology:

“Firstly, I think anybody who feels left out, or feels snubbed by an ‘In Memoriam,’ from the bottom of our hearts, there can only be apologies. Because we go into this show only ever wanting to bring joy and love to people with music, and then with an ‘In Memoriam’ just remember people in the best way possible. So no excuses, no anything other but sympathy to anybody that feels that.”

“I think the practicalities of running a live show…usually, the ‘In Memoriam’ contains between 45 and 60 people a year. There were 60 people in that ‘In Memoriam’ montage. And the Recording Academy have a committee of people — and I don’t know the ins and outs of it, Brian, I have to be honest with you, it doesn’t necessarily fall under us in any way — the Recording Academy have a variety of members, and they go through the hundreds of members who pass away every year, and they decide who should be honored in the ‘In Memoriam.’ I don’t know the ins and outs process, I don’t think it would be right for me to speak on it, but all I’ll add, at a point, maybe I should’ve done something. It’s tough, making a show like this, and you’ll always be open to criticism and stuff, and you hear that criticism, and you take it.”

So here’s where we feel the need to butt in with our little take on this.

So first of all, Winston outright tells the world, Hey, I do the show. The ‘In Memoriam’ is by the guys who pick the winners, and since they’re all industry folks, they’re OBVIOUSLY going to honor their assistant recording engineer friends and not, say, Jeff Hanneman.

But second, we don’t buy that last part about hearing the criticism. Because every year, metal gets snubbed. Every year, we talk about this. And I’m sure we’re not alone — I bet members of, say, the hip-hop community feel this way, too. It seems like every year, we hear, You’re right, we’ll put Vinnie Paul in the long list, we’ll remember this for next year, and then next year, they’re like, Keith who? I’ve never heard of any ‘the Prodigy.’

Anyway, you can listen to the whole interview here and judge for yourself. The ‘In Memoriam’ section starts at about 21:55.

Looking to get number two in the bag this year.

Metal Sucks Greatest Hits
0 -
The Single Greatest Analysis of Nickelback’s Work Ever Written
0 -
Footnotes: A Handy Catalog of Every Song from Which Avenged Sevenfold’s Hail to the King “Borrows”
0 -
West Texas A&M University Launches Course in Metal Lyrics
0 -
Photos of Metal Musicians When They Were Kids
0 -
Incredibly Metal Six-Year-Old Girl Terrorizes America’s Got Talent
0 -
Joey Jordison Claims He Was Fired from Slipknot Via a Singing Telegram