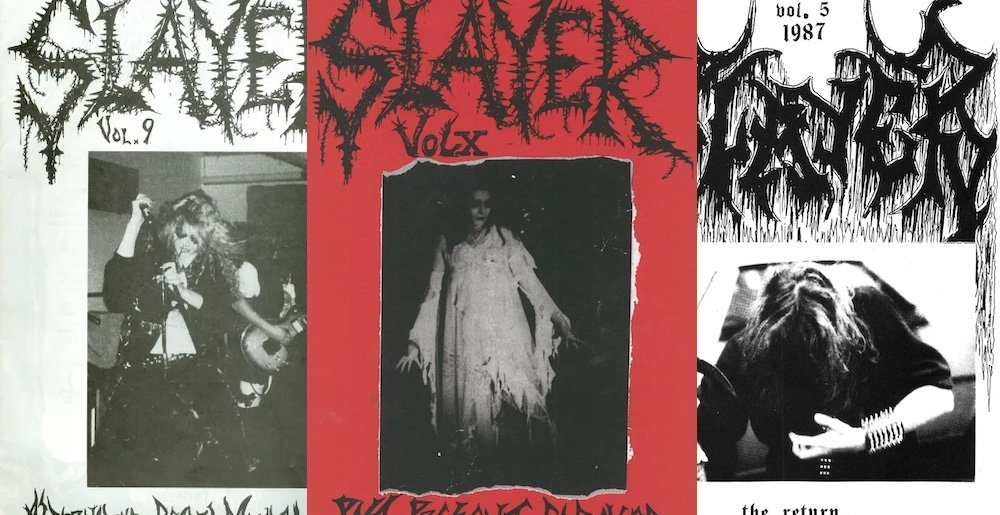 Sarpsborg, Norway, is a city of paper factories. It was there that Jon “Metalion” Kristiansen was born on May 20, 1967. As a child, Metalion feared Ozzy Osbourne’s voice, and yet he would grow up to become one of the most significant figures in the history of metal. In Kristiansen’s stunningly beautiful 2011 book Metalion: The Slayer Mag Diaries, which includes every issue of his influential underground zine Slayer Mag, as well as Metalion’s reflections as recorded by his American partner in crime, Tara G. Warrior, one can see why Kristiansent would forever be remembered as one of metal’s greatest publishers. Not only did he promote metal’s booming underground, but he also encouraged people all over the world to arm themselves with pens and microphones, and live in a musical Hell of their own design.

Here’s a brief timeline of Kristiansen’s work and how it affected metal: in 1983, Metalion co-founded a zine called Live Wire, a project that went to hell after two of his co-workers found Christ. Undaunted, he started Slayer Mag in 1984 with the help of his older brother (as is so often the way in metal). The first edition of Slayer came out on February 1985. By Vol. X, Slayer had fully transitioned into an English-language publication. Nifelheim and Sadistik Exekution, two of the bands whose careers Slayer helped launch, released Tribute to Slayer Magazine in 2006. In 2010, Slayer’s final chapter, Vol. XX, was released with the vinyl Ancient Morbidity. This 12” consists of three tracks by the band Morbid, which was fronted by Metalion’s friend and late Mayhem vocalist Per Yngve “Pelle” Ohlin, better known as Dead. You can see Dead’s sketches throughout issues of Slayer alongside Arne Babb, a kangaroo wearing a reindeer’s head who Kristiansen created to be the grim zine’s mascot.

Slayer Mag published interviews with a wide range of artists: Beherit, Children of Bodom, Arch Enemy, Candlemass, and even a young Marilyn Manson. But Metalion is most recognized for his involvement with the “True Norwegian Black Metal” movement, known to most as the second wave of black metal. Metalion is distinguished in his foresight and uncanny ability to spot talent, and the exceptionally informative pages of Slayer demonstrate his penchant for special musicians with a spark of greatness.

Although Slayer Mag received material from contributors, Metalion always remained the zine’s chief voice. As he recalled in The Slayer Mag Diaries, “I wanted to create everything from the first page to the last on my living room floor.” The magazine was a labor of love; Metalion gave many copies away for free, even though he usually paid for printing. He spent most of his remaining money on postage, tape trading, and trips to festivals like Wacken.

Metalion always seemed to be at the center of important developments within the underground. When Bathory’s Quorthon informed Metalion in a letter that his next record would be called Music from Under the Sign of the Black Mark, Metalion suggested that he shorten it. Was it a coincidence that this groundbreaking 1987 album became known as Under the Sign of the Black Mark? Two days before Cliff Burton passed away, Metalion spoke with his Metallica bandmates. When Mayhem’s Euronymous decided to open a shop that has since morphed into a tourist site for metalheads visiting Norway, Metalion brainstormed a terrific name — “[Velkommen til] Helvete!” When Darkthrone released their debut album, Soulside Journey (1991), Peaceville Records’ founder Paul Halmshaw included the shout-out: “Hey Metalion, like the pipe?”

Before there was social media, Metalion was an influencer of the first order. Zines like Slayer were the primary source of information for underground metal musicians and their fans in the ’80s.  According to Therion’s Christofer Johnsson in Daniel Eskeroth’s 2006 book Swedish Death Metal: “Slayer Mag from Norway was without a shadow of a doubt the ’zine you respected the most back then…” The publication has been likened to the Bible by Darkthrone’s Fenriz and Tiamat’s Johan Edlund. Metalion wrote a merciless review of the former’s sophomore demo, Black Death’s Black Is Beautiful (1987), yet Fenriz has since admitted that this public evisceration actually helped him.

Kristiansen met Mayhem’s Euronymous and Necrobutcher while peddling Slayer Mag Vol. 2 at Motörhead concert. In his 2018 book The Death Archives, Necrobutcher recalled: “We were surprised that there was a magazine for extreme metal in Norway.” Mayhem were featured for the first time in Slayer Vol. 3/4; aside from the Norwegian punk magazine Panic, Kristiansen was unsure whether anyone else had previously written about Mayhem. He speculated that his interview may have inspired the band to prove themselves with their debut demo, Pure Fucking Armageddon (1986).

The band and the zine editor soon developed a close bond. The pair expanded one another’s musical horizons and developed the two biggest tape-trading networks in Norway.  Metalion said of Euronymous, “He was my closest friend for a long time…”

He was also indirectly responsible for connecting Mayhem with their former frontman Maniac. Before Metalion was arrested outside a Mötley Crüe concert for selling Vol. 3/4, he managed to sell a copy to the eccentric musician. After learning of Mayhem through Slayer, Maniac recorded the Septic Cunts tape that earned him a place within the band. Maniac’s companion Nella would design logos for both Mayhem and Slayer Mag, and Mayhem dedicated the highly influential 1987 record Deathcrush to Metalion (it probably helped that he gave them $1,000 for pressing the album). Kristiansen accompanied Mayhem when they drunkenly recorded this classic; the writer can be heard singing along on Deathcrush’s outro, which is a perverse cover of The Young Ones’ “(All the Little Flowers Are) Happy.”

In 1986 and 1987, Metalion embarked on Interrail journeys with members of Mayhem through Europe. The boys met musicians from bands like Sodom, Kreator, and Napalm Death. During the first trip, Euronymous forced his acquaintance upon Conrad Schnitzler, who provided the “Silvester Anfag” intro for Deathcrush. Euronymous, Necrobutcher, and three musicians from Assassin formed a project called Checker Patrol, who later recorded a demo called Metalion in the Park. Metalion remembers singing backing vocals on the title track.

Necrobutcher has stated that Dead initially contacted Mayhem because Metalion informed him that they were looking for a new vocalist. The fact is that Kristiansen first wrote to Dead after Euronymous played him a cassette that Dead had sent from Sweden. And yet Metalion also told Full Moon Productions that he was the one who alerted Dead of Mayhem’s opening. We can only assume that he broke the news by phone that future-opera singer Torben Grue was not working out.

In 1990, Dead wrote from Norway to his Italian pen-pal “The Old Nick:” “If something at all happens in this country it’s there [where] Metalion lives… in Sarpsborg.” Kristiansen booze-fueled 1989 New Year’s Eve party provided a meeting ground for Dead and Grotesque’s Tomas Lindberg (later the frontman of melodeath game-changers At The Gates); Dead later became such a raving, knife-wielding lunatic that his peers handcuffed him. Afterward, rumors circulated that Metalion had died. On February 28, 1990, Mayhem came to Sarpsborg to play a concert that Kristiansen organized. This performance has been immortalized on the band’s The Dawn of the Black Hearts (1995) and Live in Sarpsborg (2017).

In a world of asinine opportunists, Kristiansen’s words about Dead are a truly touching reality check after the Mayhem frontman’s 1991 suicide. Metalion had endured brutal scrutiny in Norway, withstanding police interrogations for crimes such as the burning of the Sarpsborg Church on Christmas Eve 1992. He never betrayed anyone’s confidence, and had good intentions when he opened up to the authors of the 1997 book Lords of Chaos, which would become the defining chronicle of black metal’s second wave — outside of Slayer Mag, that is.

Before Euronymous’ death at the hands of Burzum’s Varg Vikernes in 1993, the guitarist had inspired Metalion to start his own label, Head Not Found. The name, which comes from an Autopsy song, was provided via a sketch from Entombed drummer Nicke Andersson. After Varg’s arrest, Metalion sold the remaining copies of Burzum’s 1993 album Aske and paid the musician’s mother, later revealing that the album was supposed to have been released by Head Not Found, as opposed to Euronymous’ Deathlike Silence Productions. Head Not Found later worked with Gehanna, Ulver, Windir, Emperor, Fenriz’s Valhall, and more. Regarding Trelldom’s debut album, Til evighet… (1995), Gaahl told author Dayal Patterson, “I didn’t want to release anything but [Metalion] managed to convince me to do so.” Amazingly, Varg wanted to give Metalion the rights to Hvis lyset tar oss (1994) and Filosofem (1996). But in 1995, he began cutting off contact with Varg, and eventually quit his label in 2001.

Like Dead and Euronymous, Metalion eventually came to adopt the belief that metal and politics do not mix. He expressed this view when speaking with Nihilistic Webzine: “… what I find interesting is that so many of those Nazi-oriented bands really do suck. The music is not interesting at all; I think the reason for this is that those guys are more interested in promoting political ideas instead of proper music. So for me, this is very uninteresting…I never judge anyone by the color of his or her skin; I chose to judge a person on how he acts.” That said, Slayer Vol. 7 made a point of outlining Kristiansen’s personal politics, containing declarations of “Nazi scum fuck off!” and “No Nazis featured!”

Later in his career, Kristiansen became a photographer. His early work has been used for albums like Darkthrone’s The Cult is Alive (2006), Gorgoroth’s Live in Grieghallen (2008), and Watain’s Lawless Dark (2010). He contributed an introduction to Peter Beste’s much-loved photography book True Norwegian Black Metal (2008). Soon after completing his studies in 2007, he exhibited his work at a Manhattan gallery.

Interestingly enough, in later issues of Slayer, you will sometimes find Metalion waging war against the Norwegian black metal mania that he helped build up. In Slayer Vol. XX, Metalion clarified: “I am not really interested in being a part of a scene…” A comparison may be drawn to Darkthrone’s decision to experiment with various musical styles over the years as they deconstructed their image. The motive for change in both cases was partially to return to “old-school” roots. As Per Ohlin wrote in “Pagan Fears,” “The past is alive.” And among those of us who grew up poring over the pages of metal rags and hastily-copied zines, Slayer Mag deserves our eternal worship.

Jon Kristiansen’s Metalion: The Slayer Mag Diaries is out now on Bazillion Points and available for purchase.

Sponsored Links from Across the Internet
Show Comments
Related Articles
Editorials 0
12 Behind-The-Scenes People Who Defined Metal As We Know It
February 2nd, 2022 at 11:01am Emperor Rhombus

These 12 people made all this possible, but you probably couldn’t pick them out of a line-up.