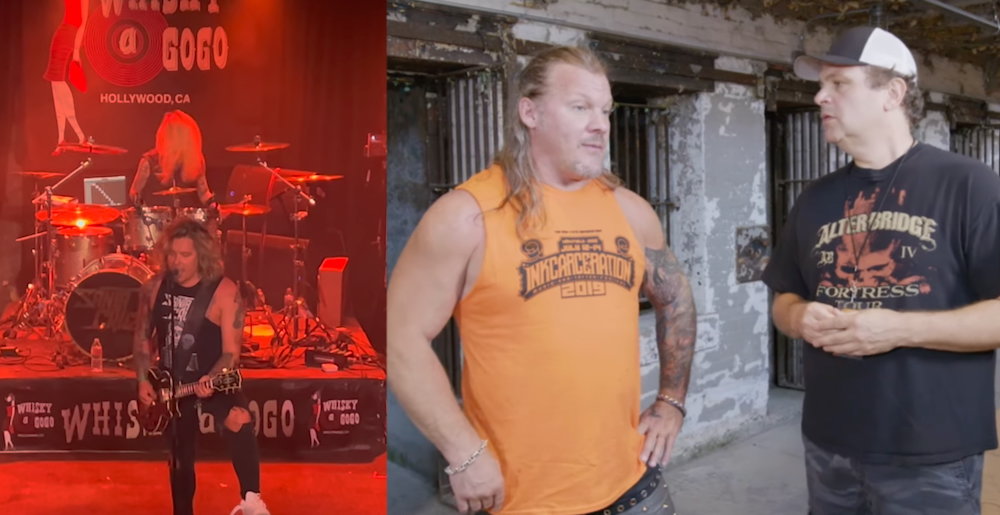 Last week, wrestler and Fozzy frontman Chris Jericho publicly stated that he uses backing tracks live, saying that “everybody does it” and that “it doesn’t make you any less of a band.” But now, Finnish rock act Santa Cruz are getting publicly lambasted by metal radio host Eddie Trunk for a video which reveals them using backing tracks — and multiple fans have noted that Trunk hasn’t mentioned Chris Jericho in his angry social media posts, which feels suspect, given his longstanding relationship with Jericho.

As you’ll see in the video below, Santa Cruz played the Whisky a Go Go in LA, and during a performance of their song “Under The Gun” are very obviously using a backing track. This led Trunk to take to his Facebook calling out the band and claiming that lip-syncing is a despicable problem in the rock and metal scene at large. Trunk wrote:

“This is beyond words … everyone I guess just okay with this?! As I’ve said and have been saying this has become an epidemic that needs to stop . So bad it’s to the point this band doesn’t event attempt to fake their lip synching.. stunning. Imagine paying to see a band you love ‘live’ and it’s anything but. What’s the point? Imagine you are a band that puts the work in to be live, and others don’t, play to a computer , and fans talk about how great they sound.. pathetic. It’s the norm in pop, it’s gotta stop in rock. Bands, fans and promoters have to care that a live rock show is live or it will only get worse. Madness.”

However, as you’ll see from the tweets below, many fans brought up that Trunk left Chris Jericho out of his angry rant — which felt weird because a) Jericho literally JUST said he used backing tracks, and b) Jericho JUST appeared on Trunk’s show, where he talked about the Grammys at length but was never confronted about his use of backing tracks.

Our take is simple: we agree with Trunk that backing tracks are kind of lame, though we honestly don’t care THAT much, and certainly not enough to declare them the great tribulation of our time. That said, if you’re going to call out bands for using them on your big public platform, leaving someone you have a relationship with out of that is pretty wack.

Meanwhile, the band’s guitarist Archie Cruz responded on social media with the following, via Chaoszine:

Check out the video and posts below:

The Leads Are Weak 0
Chris Jericho Claims He Only Uses Backing Tracks for “Ambience,” Calls Out Santa Cruz for Using Them
May 7th, 2022 at 8:20am Emperor Rhombus

Metal Sucks Greatest Hits
0 -
Etienne Sin: What the Actual Fuck
0 -
Today in Dream Theater Shirts: Metalhead Veterinarian Fired for Bestial*ty
0 -
Twelve Reasons Babymetal are the Single Best Thing to Happen to Metal in the Past Decade
250 -
Worst Year Ever: All of Our 2011 Year-End Sh*t in One Place
0 -
Video: Vocalist Performs Ten Styles of Metal, Complete with Appropriately Silly Lyrics
0 -
Heavy Metal Kitten Covers