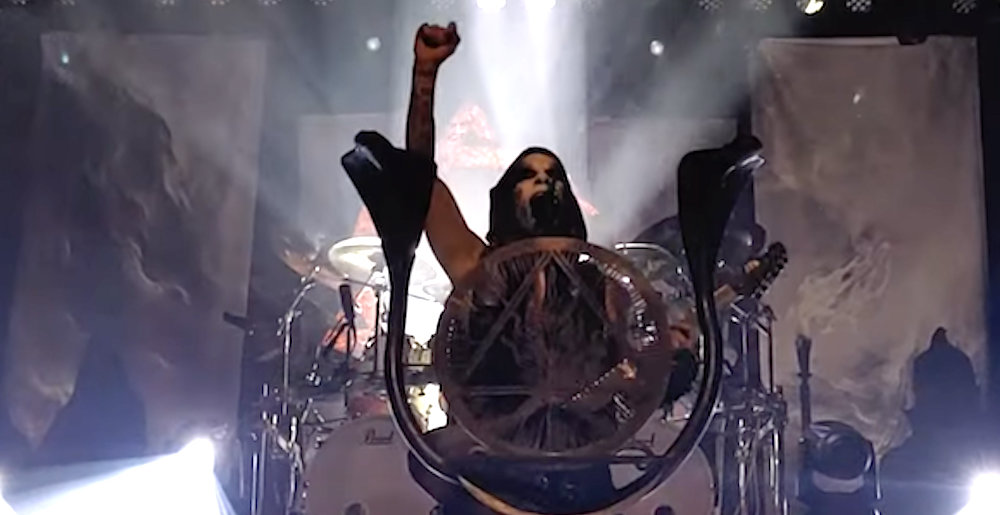 Last night saw Behemoth‘s current tour with Arch Enemy and Napalm Death kick off in Tempe, Arizona. The Polish death metallers celebrated this event by performing a brand new track, titled “Ov My Herculean Exile,” to the audiences at the show. You can catch video of the performance below.

As you’ll hear via the live footage, the track is definitely more New Behemoth than Old Behemoth. The band are doing a lot more of that mid-paced, old-world chanting thing that they’re now known for than they are their traditional death-metal steamroller. That makes sense, given the progression from 2009’s Evangelion to 2014’s massive The Satanist to 2018’s goth-ish I Loved You At Your Darkest, which has marked a notable evolution towards more atmospheric and dramatic sounds than fans of old-school albums like Zos Kia Cultus and The Apostasy are used to.

So there you go — Behemoth’s upcoming new album, which is rumored to be due out later this year, is going to try and be even more approachable than their last one. It’s almost like they’re trying to sell records or something. After all, tattoo-leaning mens’ hairstyling shops don’t pay for their own rent!

Check out the track below, and get tickets to see the band at one of their remaining dates:

Sponsored Links from Across the Internet
Show Comments
Related Articles
Haterade 0
Nergal Calls Out Other Bands for Sounding ‘Exactly the Same’
January 2nd, 2023 at 10:03am Hesher Keenan

News 0
Behemoth’s Nergal Thinks Kids Should Get “A Proper Job” Instead of Starting a Band
November 10th, 2022 at 3:54pm Hesher Keenan

Metal Sucks Greatest Hits
0 -
Metallica’s St. Anger Was Released Ten Years Ago Today
0 -
If You Like Bass Dogs, You’ll LOVE Drum Fish
0 -
Unearth are the Slayer of Metalcore
0 -
Why are metal fans hopelessly stuck in the past??? :(
0 -
L.A. Band Threatin Faked a Fanbase To Land a European Tour No One Attended
250 -
Worst Year Ever: All of Our 2011 Year-End Sh*t in One Place