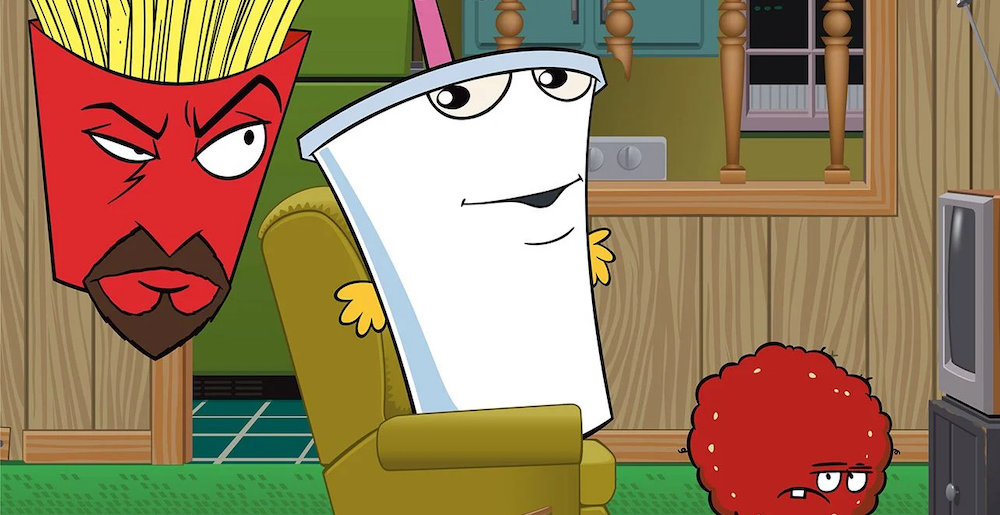 The beauty of different eras in history coming back around in favor is that old fucks like me don’t have to explain ourselves anymore. For example, Adult Swim‘s Aqua Teen Hunger Force is definitely something I would have once assumed I’d have to explain to the youth of 20 years in the future, and would have a hard time babbling my way around the concept of ‘random humor,’ and what a twisted time we felt like we were living through during those years, and how fucking wasted we all were at all times. But now, I don’t have to, because the ’90s and 2000s are being perceived as cool in hindsight, and they’re just keeping Aqua Teen going.

Yup, as reported by Loudwire, Adult Swim just started back up after seven year, and now goes by Aquadonk Side Pieces. The first episode is “The Return of Handbanana.” Oh, you don’t remember Handbanana? Cool, so, Frylock tries to make Meatward a dog using their pool as a genetic vat, but the DNA comes from Master Shake’s hand, so the thing ends up looking like a banana, hence the name. But then what happens is that Handbanana brutally rapes Carl, the Hunger Force’s neighbor, over and over, while rasping sexual threats that only Carl can hear. How does Carl get back at Handbanana? By using the genetic vat to make a dog out of his DNA, that looks like him (Carl names him the Enforcer, but the dog swiftly interjects that he wants to be called ‘Spaghetti’). However, in cruel twist of fate, Spaghetti also rapes Carl. The episode ends with Shake jacking it to Carl’s violation by the dog.

So, apparently, Handbanana’s back, so check that out! Watch the new season of Aqua Teen Hunger Force on YouTube or HBO Max eventually. Here’s a snippet below.

From desert fuzz to avant garde madness, Japan is Loud proves the land of the rising sun has something for everyone.

About a year ago, we learned that Adult Swim was […]

Also: Run the Jewels, Eric Andre, Rick and Morty and 20 other performers.

Metal Sucks Greatest Hits
0 -
Chad Kroeger and Avril Lavigne Finally Wrote a Song So Awful that the Internet Has Collectively Rejected It
0 -
Website Photoshops Dogs in Place of Bass Guitars Because Why Not?
0 -
I, For One, Welcome Our New Robot Overlords
0 -
Students at British School Sing Iron Maiden’s “Flight of Icarus”
0 -
Give a Heavy Metal Valentine’s Day Card to Someone You Love
0 -
Jack Daniels Releases Single Barrel Whiskey in Honor of Motörhead