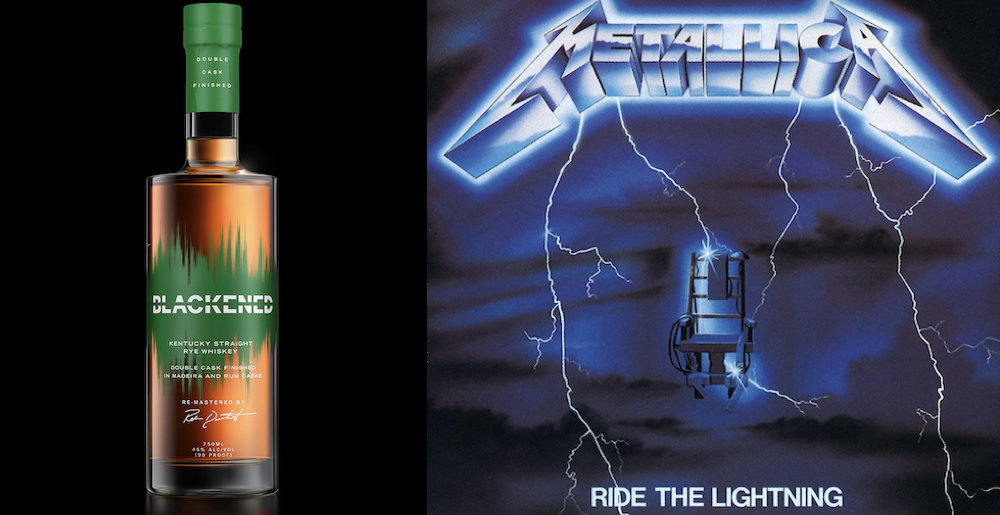 Metallica Release Whiskey Named ‘Rye The Lightning,’ Which Is Clever Until You Find Out They Played It The Album

When Metallica announced their first alcoholic beverage, Blackened American Whiskey, we had a lot of questions. Why now? Why a whiskey? Why would a band who made an entire movie where their frontman’s addiction issues were on blast release a hard liquor? And, of course, why Blackened? THAT was the song, and the word, that the band wanted most associated with their booze? But now, the Four Horsemen have almost redeemed themselves by dropping a new whiskey named Rye The Lightning, which even we had to admit is pretty clever…until we found out it’s because they played the whiskey barrels songs from Ride the Lightning.

According to Blabbermouth, who just cut-and-pasted this:

Rye The Lightning is crafted from Kentucky straight rye whiskeys aged between five and eight years and hand-selected by Blackened master distiller and blender Rob Dietrich. The whiskeys are then vatted and transferred for finishing in Madeira wine and Caribbean rum casks for two to 14 weeks each. The double cask finishing results in notes of dried fig, hay, pinewood, pear, and rum cake on the nose, and on the palate, clover honey, mint, corn husk, sugar cane, walnut, and cinnamon.

Okay, cool, so a tasty whiskey! The last one was pretty good, too. I’m excited to try–

It is during the rum cask finishing that the proprietary Black Noise sonic-enhancement process is applied.

The barrels are pummeled by the low hertz frequencies of Metallica’s music, and the sound waves visibly shake the finishing barrels, causing greater interaction between the whiskey and the wood, thereby extracting more flavors and colors.

Aw, man, maybe I’m in the minority here, but it was so much better when it was just a clever pun and not some science experiment.

The name for this release is aptly dubbed Rye The Lightning because the playlist used for the Black Noise sonic-enhancement process is Ride The Lightning. But Rob Dietrich and Metallica didn’t want to just use the original version — they wanted to amp it up a notch. They chose a playlist consisting solely of the “Ride The Lightning” portion of Metallica’s June 2012 Orion Music + More festival setlist — the only time the band has ever played the album live in its entirety, albeit in reverse track order from the original album.

“The vibe from the crowd at the first Orion Music + More festival was electrifying,” said bassist Robert Trujillo, “and it’s really cool that we get to capture that energy in this release. We’ve used a few live songs in our playlists before, but never a full live playlist. So to be able to incorporate our fans in the Blackened journey and have them be a part of the whiskey-making process is really unique, and makes this a true collaboration.”

So there you have it: they played the booze songs from Ride the Lightning. Hope you can’t taste the “Escape.”

You can purchase Rye The Lightning via the Blackened American Whiskey site.

Metal Sucks Greatest Hits
0 -
Missed Connections: You Puked at the Ulcerate Show (M4M – Brooklyn, NY)
0 -
A Sh*tstain on the Ass of the Universe, #28: Lie or Liar
540 -
Matt Pike’s Top Ten T-Shirts
0 -
Rigged: Luc Lemay of Gorguts
0 -
A Detailed Analysis of Slipknot’s New Masks
0 -
Twelve Reasons Babymetal are the Single Best Thing to Happen to Metal in the Past Decade