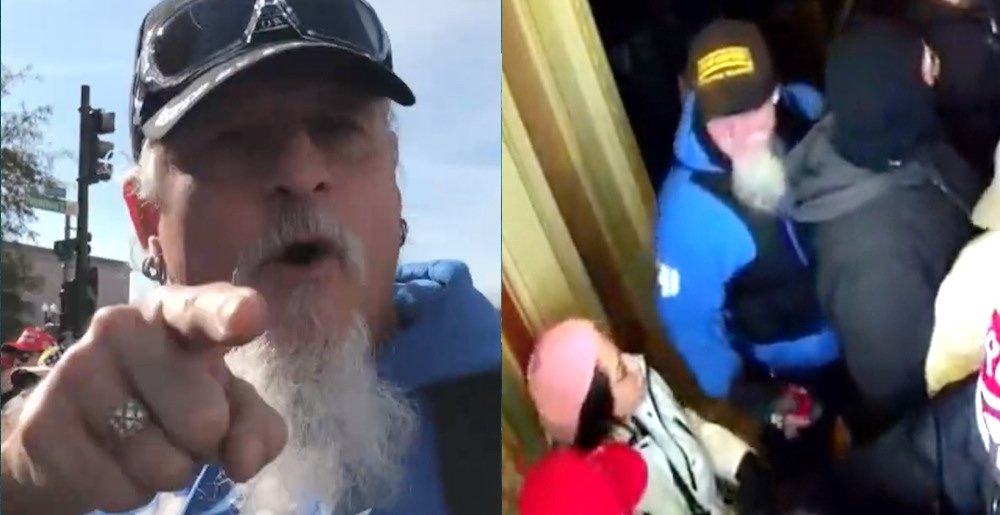 For those of you who just showed up with a cone of soft-serve asking what you missed, Jon Schaffer, guitarist and songwriter for American power metal act Iced Earth, was one of the first rioters to enter the Capitol Building during the January 6th riots stirred up by former president Donald Trump’s bogus claims that pretty much everyone had “stolen” the election from him. When he was arrested, it was revealed that Schaffer used “bear spray” on police at the scene. Now, new footage of the riots has come out that shows Schaffer with bear spray in hand.

As reported by Blabbermouth, the new video of Schaffer comes via a video exhibit in the U.S. Capitol riot case that was released this week by the U.S. Justice Department, and was then posted on Twitter by CBS News’ Scott MacFarlane. In the footage below, at about the 18 second mark, one can see Schaffer push his way forward from the back of the crowd. He comes around the left side of the screen, hanging back until he has room to get through to front of the crowd. As he moves forward, you can see the bear spray canister in his right hand.

This isn’t entirely new information to fans — photos of Schaffer during this moment were already released — but the footage itself is new.

Schaffer would of course go on to plead guilty to “Obstruction of an Official Proceeding” and “Entering and Remaining in a Restricted Building or Grounds with a Deadly or Dangerous Weapon” for his involvement in the riot. He was then released after 89 days in jail, where he said that inmates threw shit at him. In November, it was said that Schaffer was still cooperating with the investigation into the Capitol riots, though in December he was sued for his involvement.

You can watch the footage below:

Sponsored Links from Across the Internet
Show Comments
Related Articles
Editorials 0
Opinion: ‘Separating the Art from the Artist’ Is Some Weak-Ass Bulls**t
February 25th, 2022 at 12:30pm Emperor Rhombus

31 members of the Proud Boys and the Oath Keepers are named in the complaint, which seeks to recover the millions of dollars the city spent to defend the US Capitol during the seditious riot on January 6.