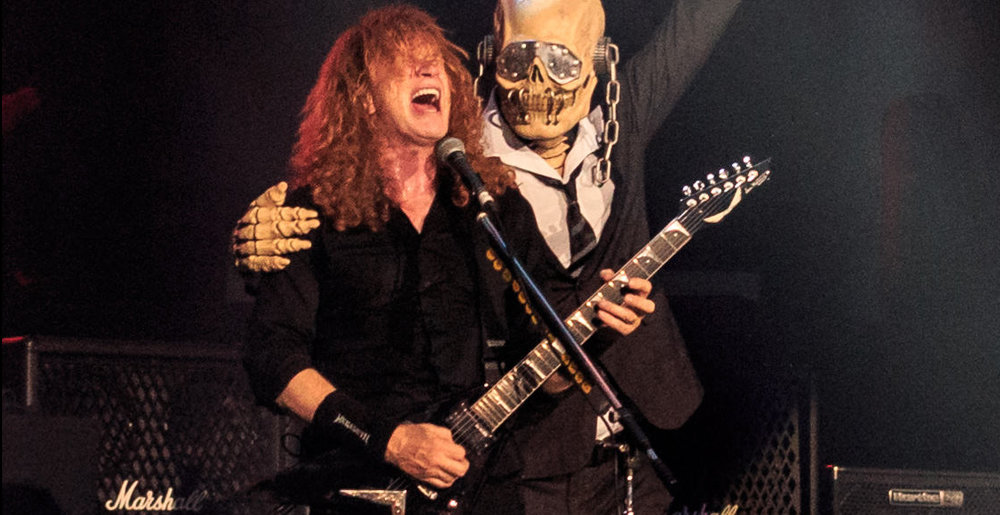 Video: Dave Mustaine Calls Out Venue Security Guard: “Cool It or I’ll Ask For You to Be Taken Out of the Pit…Do We Have a F***ing Understanding Here?”

Lately, more and more rock stars have been calling out concert security when they’re not doing their jobs or need to make sure their fans are safe. Now, Megadeth frontman Dave Mustaine is the latest to do so, railing against a security guard at the band’s Nashville show this past Friday.

In the video below, Dave calls out a security guard, saying the following (as transcribed by our Internet girlfriends over at Metal Injection):

“Stop interfering with our show. Okay? You don’t need to go up on the fucking barricade and point at people. Everybody’s having fun. Cool it or I’ll ask for you to be taken out of the pit. Do you understand me? Do we have a fucking understanding here? Don’t do it again.

“I’m sorry, you guys. It’s just I don’t want your show to be fucked with by a bunch of fucking people that don’t know why they’re here.”

So…okay, look, a) we’re all for bands calling out security when they’re being overly aggressive, b) we weren’t at the show, and c) we’re infamously harsh Mustaine critics, so take all of this with a grain of salt. BUT: was the guy really just getting up on the barricade and pointing at people? That’s security’s job, and it’s not necessarily something that impedes the show in any way. Pointing at folks is a way to let concert staff know that some members of the crowd are being too violent or inappropriate. Unless this guard was really causing shit, this feels more like grandstanding than doing right by the fans.

ANYway, watch the video below and decide for yourself. Meanwhile, get tickets for one of Megadeth’s remaining dates with Lamb of God, Trivium, and In Flames below:

Metal Sucks Greatest Hits
0 -
That Time Shaun Got Drunk and Filmed a Music Video with His Cat
0 -
David Lee Roth on Van Halen Brothers: “We Have Always Hated Each Other”
0 -
Thirty of the Worst Metal Band Promo Photos of All Time
0 -
Give a Heavy Metal Valentine’s Day Card to Someone You Love
0 -
Oderus Urungus from GWAR Reads Goodnight Moon
0 -
Peep These Awesome Pop Stars Gone Metal Shirts