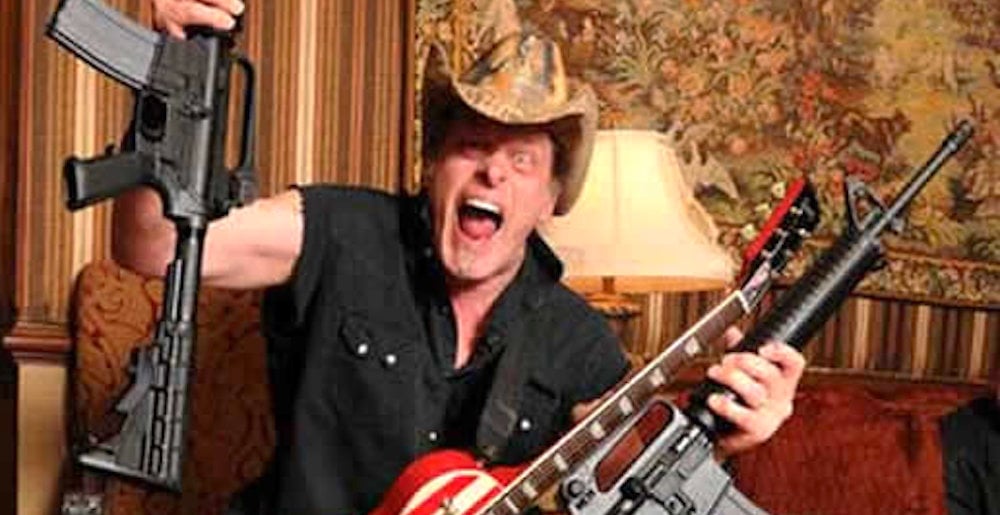 Ted Nugent Urges Trumpers to Assault Liberals at Rally: “I’d Love You More If You Went Berserk on the Skulls of the Democrats”

So far, right-wing crackpot, insensitive asshole, and Putin sympathizer Ted Nugent has been smart about keeping his hardcore political blathering relatively bloodless. The dude is the king of the ‘just my opinion’ defense — which, hey, is valid, and is what MetalSucks is based on. But at a Trump rally last night, Ted took the stage and straight-up urged the crowd to commit acts of violence against the people who he considers the “enemies of America.”

As reported by Consequence of Sound, Ted took the stage at a Trump rally in Austin on Saturday night and said the following:

“…force, if I do say so myself, everyone in your life to think of what the enemies of America have done over the last 14 months…They didn’t sneak into the White House — they lied, they cheated, they scammed, and everyday the Democrats violate their sacred oath to the Constitution. And if you can’t impress you friends on that, they shouldn’t be your friends.

“I love you people madly, but I’d love you more if you went forward and just went berserk on the skulls of the Democrats and the Marxists and the Communists.”

So first off, to get in front of it, here’s how Ted’s going to explain this away: he’s going to say he means a war of knowledge and information. He’s going to claim that when he said “berserk on the skulls,” he meant that he wanted those in attendance to challenge the thinking of these “enemies of America.” It’s actually outraged liberals’ fault for misinterpreting him, right?

But it’s pretty clear by Ted’s tone that he didn’t mean that, and it’s pretty clear by their reaction that the crowd didn’t take it that way. This is a call to violence, and if people get hurt because of it, let’s not get bogged down in Ted’s long-winded, acrobatic explanation about how this was actually the left’s fault.