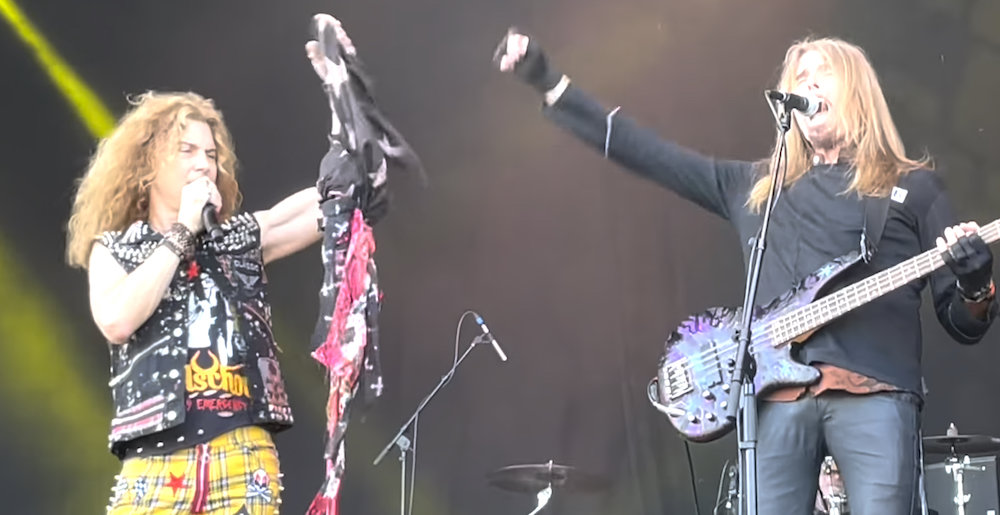 We’ve all had bad days at our job. This reporter himself has fucked up more headlines and hastily corrected more typos than he could possibly remember. That said, when you’ve got a big meeting at work the next day, you make sure that you’re ready for it, and for a metal band, there’s no bigger work meeting than a massive festival set. Which is why it’s especially egregious to watch the fan-shot video of German hard rockers Kingdom Come‘s set at the Sweden Rock Festival.

As you’ll see in the footage below via Ultimate Guitar, there are a lot of issues going on during Kingdom Come’s set. There’s frontman Keith St. John desperately trying to untangle a microphone from a snare of scarves and bandanas. There’s bassist Johnny B. Frank’s unthinkable solo in the midst of all this other bullshit. But most of all, it’s drummer James Kottak, who starts every song at one tempo and then gradually…slows…down…over…time. It’d be one thing if it was just for one song, but the issues are so constant that the viewer wonders if something is really wrong behind the scenes. Like, what happened here?

We’re not alone in this, either. As journalist and guitarist Janne Stark wrote via Facebook:

“I’ve never seen a drummer fall asleep on stage before but James Kottak is pretty damn close. Drunk? He slows down every song to half tempo. Kingdom Come, sorry guys but this is SHIT! Edit: they actually managed to make it worse…. Bass solo”.

Look, we’re not trying to be mean to Kingdom Come. Honestly, watching this, we really do wonder if there was something bigger going on behind the scenes. But damn if this ain’t a great big fuck-up. Hopefully, the band have taken this criticism to heart, and will come back tight and energetic at their next show.

Check out the footage below.

Where they in the same swerving car or something?

Metal Sucks Greatest Hits
0 -
David Hasselhoff’s “True Survivor” Music Video Just Broke the Internet
0 -
Footnotes: A Handy Catalog of Every Song from Which Avenged Sevenfold’s Hail to the King “Borrows”
0 -
G.O.A.T. and Your M.O.M.’s “Quack like a Duck” Justifies Humanity’s Entire Existence
1480 -
Being in a Band is for Losers [Scientific Proof]
0 -
The Black Dahlia Murder’s Trevor Strnad Rants Against Music Pirates
820 -
Tiberian Vocalizations: Cormorant’s Arthur Von Nagel Gives You The Anatomy of a Record Contract