Metal Sucks
Metal Sucks Watch: Steel Panther’s Sign Language Interpreter Does... 10 Threats to Metal Rated By How Worried About Them We...
- Tweet SHARE
Enlarge
You Know What I'm Talkin' About??? 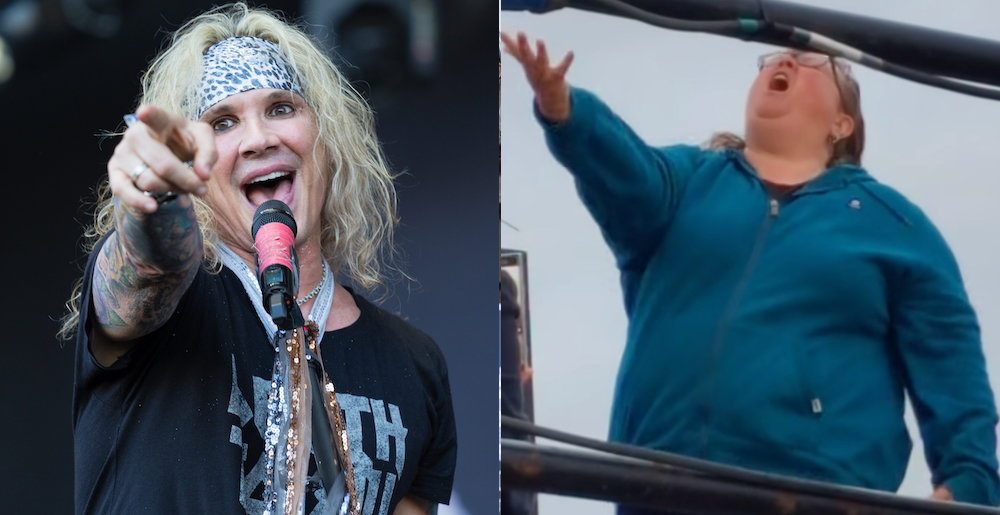 Watch: Steel Panther’s Sign Language Interpreter Does “Suck My A***” and Sperm-Shooting Gestures

We appreciate how into metal music a lot of festivals’ sign language interpreters are getting. It allows people who are hard of hearing to not only understand what’s being said by a band, but also understand the intensity and intentions of their music.

Case in point, during Steel Panther‘s performance at this year’s Download Festival, the band’s sign language interpreter got pretty into the lyrics of their song “Death to All But Metal” — to an awesome if vulgar degree.

For those of you who have never heard the song, “Death to All But Metal” includes lyrics in which Steel Panther frontman Michael Starr tells the “fucking fuckheads who program MTV” to “suck [his] ass,” and then talks about 50 Cent and Kanye West “shooting hot sperm on each other’s chests.”

As you’ll see below, the band’s interpreter doesn’t miss a beat, offering the audience hand motions of both ass-sucking and sperm-shooting. The former is a sort of soft swiping at the bottom, while the latter is — well, you know what the latter is. You’ve seen people do the jack-off cum-fling motion before.

Steel Panther are, of course, okay with having their lyrics acted out so vividly. That band will take some lewd hand gestures or commentary from anyone who’s ready to get on top of them. This includes but is not limited to “musical whore” Corey Taylor, who performed with them on this year’s Shiprocked cruise, with the band saying:

“This is gonna be awesome, because we’ve never done this song — we’ve never done ‘Rainbow In The Dark’ — and we’re gonna do it right fuckin’ now with Corey fuckin’ Taylor! And I’ll tell you what, dude – I’m so excited because I’ve been looking for a new lead singer for this band for a long fuckin’ time. And I know that Corey Taylor sings in all kinds of bands, he’s a musical whore. There’s really nothing he won’t do for $50, including this.”

Check out the sign language version of “suck my ass” below:

Metal Sucks Greatest Hits
0 -
Let’s Talk About Rammstein’s Controversial “Deutschland” Video
0 -
Heavy Metal Kitten Covers
0 -
Worst Year Ever: All of Our 2012 Year-End Sh*t in One Place
0 -
Thirty of the Worst Heavy Metal Album Covers of All Time
0 -
Exclusive Interview: John Baizley of Baroness on the Bus Crash, Recovery and the Future
0 -
Iudicia is Your New Favorite Band