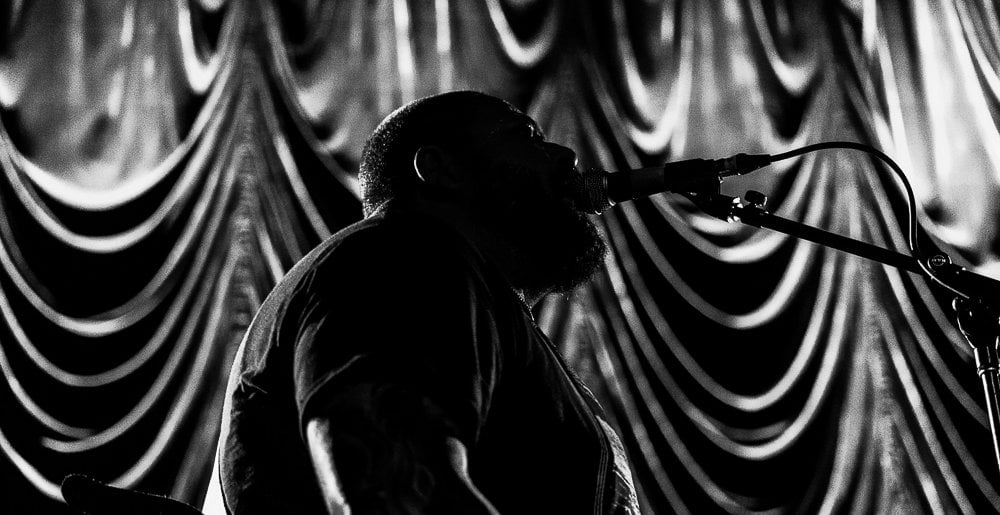 For more of Drew Nesbitt’s photography, check out his Instagram.

Watching as organizers bide their time to kill out their inboxes in a tucked away corner, I see the bartenders loading up the bandoliers of booze to be dispatched into the hands of our concert-goer kin. Ice men loading the freezer drawers with shells to chill down our beverages. A few chuckles, jokes, and hugs to keep everyone in spirit before the fire of war.

Gildans with masking tape “$25” labels sprawl about the back lounge. Accompanying them are Sharpie’d merch menus and a slew of other physical mediums to get your brain wracked over which to buy.

The smiles are far from hidden between employee and attendee as the first crowds file in through the doors. This is a union of the week’s end for everyone to celebrate and look forward to. It’s time for metal. It’s time for booze. This is Decibel Magazine’s Metal and Beer Fest of 2022. Or, at least, the pre-fest.

A Chicago outfit comprised of four, Berator are in the realm of blackened death, yet carry some thrashy vibes in their sound. Their set includes dissonant pushes and pulls, coupled with relentless fills and blasts. At times, the band’s erratic and completely unpredictable solo sections layer beautifully over their riffs, making me feel like I’m digging a tunnel straight to hell, frantically, without a cause. A specific song (I know, amateur of me to not have a set list memorized) with an opening part featuring a primal drum section turns a member of the crowd ape shit, and he uppercut-slaps his neighbor’s freshly poured brew, skyrocketing it into the rafters and, subsequently, all over his face on the way up. This starts one of many pits throughout the evening. I subsequently feel for Mr. Neighbor here, but can you really blame Mr. Pit Master over here? Shit was brutal.

It goes without saying that any outfit that has any involvement to with any member of Full of Hell is going to feature some of the most intense and tight-as-fuck playing around. Collapsed Skull‘s set was riddled throughout with a signature noise sound helmed by the wizardry of vocalist Dylan Walker. Intermingled in it were some gangster-ass sampling with tweaks to twist your eyebrows up in curiosity. Then, the band immediately hit your face with the start of the next song with, just, this insane fucking ‘Ughhhhh‘ to it, before winding down to another syrupy glazed sample. Then, over to the next song, just to get started right the fuck back up again. The band seem to have maybe a set of train cables on the bass, in what seems to be a back-and-forth fight between the drummer at times, the two taking turns at lunging at each other. Meanwhile, Dylan is fighting his own battle, jumping about like the floor was absolute fucking lava. The energy on stage between the three is absolutely insane, and it’s a good palate cleanser to see these dudes having a blast and smiling between them.

I’ve had the opportunity to see Jarhead Fertilizer play down in the South just a few weeks prior to this. Their sound was massive then, and it’s much-, if not more so, this go around. Drummer Dave Bland is on vocal duties, delivering a thundering yet sporadic roll to keep everyone in line. The guitar section at times provides an almost classic death chug as a precursor to something greater, a feeling of pent-up fucking pissed-off’edness. There’s a clockwork ticking within this group, which shows them how to direct an onlooker in one direction before completely whipping them in another with severe whiplash. It was entertaining to see newcomers of the crowd finding themselves in the pit of this set; whether they liked it or not, they were there and they had to roll with it.

The lethargic wind up of the church bells hint at hour-long death ensemble. And yeah, that’s exactly what Mortiferum provided. There wasn’t a single missed beat, with a gospel that only got grimmer at every turn. But then, at any moment, the band picks up speed and fills out what was necessary to convey authority through chaos. Low, baritone riffs in a tightly-structured environment kept the crowd’s heads rocking in unison at almost a snail’s pace. Meanwhile, a mask of vocal toxicity spread across the room, filling every corner top to bottom.

There’s a seriously classic Death vibe coming from Horrendous‘ vocalist, and the shred element kicks up the crowd again. Patrons’ hair whips about, lasso-ing anything it its path. As sections of the set transition to technical, melodic, and more emotional passages, so does the speed in which the guys on stage build up another release of energy, as the crowd reacts accordingly. It was a homely feeling to experience the band’s slower sections — warm, yet dark, and sharp portent of what was to come for the rest of the weekend.

If there is any band that can spell out what it felt like having a cinder block wall fall on your head repeatedly, it’s Primitive Man. I’d had the chance to see and cover them a few weeks prior, and the open environment of that show didn’t much affect how I perceived their thick and begrudging sound. The band’s set is painfully slow, downed, dismal, and leaves the room completely paralyzed in awe of the punishment these three exuded for what seemed like an eternity. After this band, it was done. Absolutely final. There’s nothing left after this.

Metal Sucks Greatest Hits
0 -
MetalSucks Readers Declare Pantera The Most Unnecessarily Shat Upon Band in Metal!!!
0 -
Taking Risks
0 -
If You Like Bass Dogs, You’ll LOVE Drum Fish
0 -
Jack Daniels Releases Single Barrel Whiskey in Honor of Motörhead
0 -
That Time Shaun Got Drunk and Filmed a Music Video with His Cat
660 -
KNEEL BEFORE THE POWER OF ELEPHANTS MARCHING RIFFS