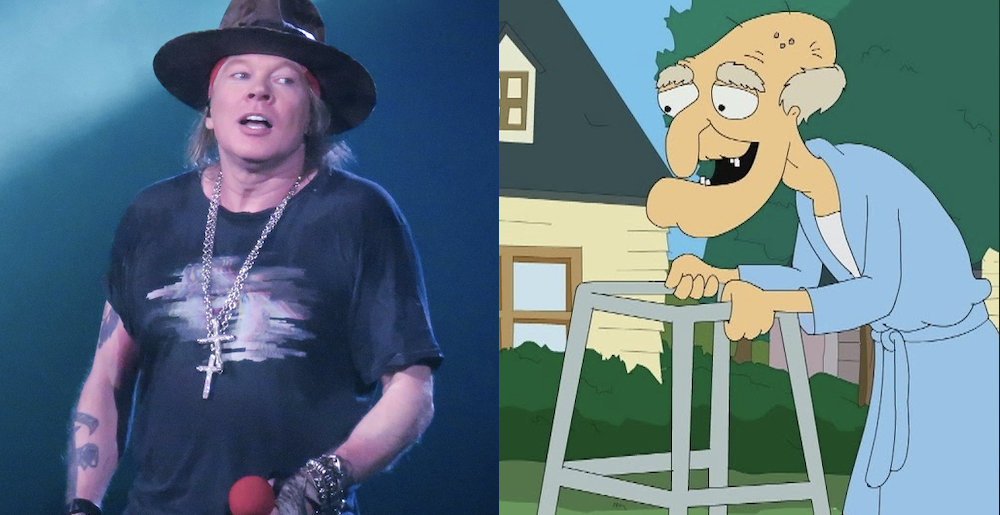 We’ll always love Axl Rose, even though we give him a monumental amount of shit. However, during Guns N’ Roses‘s June 15th set in Stavanger, Norway, Rose gave a performance of “Welcome to the Jungle” that left fans dumbfounded.

As reported by Metal Hammer, Norwegian fans have posted video footage of Axl singing the final verse of “Welcome to the Jungle,” and the most obvious comparison is to Family Guy character Herbert the Pervert, an aged pedophile who trolls Quahog looking for young boys to diddle. Axl is quick to get his vocals back in order, and they’re never quite as bad as they initially are, but holy shit, this is ROUGH.

When one fan noted that we can’t expect Axl to sound as good as he did in the ’80s, another said the following:

“There is a big difference between expecting a concert like 30 years ago and what we got here. With tickets costing 100 Euros per ticket I expected more.

While we feel for Axl, this is our take, as it was when we first posted Bon Jovi struggling to sing “Wanted Dead or Alive.” If you’re a big enough act that you’re charging huge amounts of money for your fans to come and see you, you owe them an excellent performance — or hell, at least a decent one!

We could be on the cusp of new Guns n’ Roses very soon.

Metal Sucks Greatest Hits
0 -
Deicide’s Glen Benton Sells Out, Tells Fans to Stop Moshing So Violently
0 -
Twelve Reasons Babymetal are the Single Best Thing to Happen to Metal in the Past Decade
0 -
Listen: Every Dillinger Escape Plan Song Played At Once
0 -
11 Bands You’d Get Made Fun Of for Liking Back In The Day
0 -
Meet Hatebreed’s Smallest Fan
0 -
Drummer Mark Castillo Receives Cochlear Implant, Quits Emmure