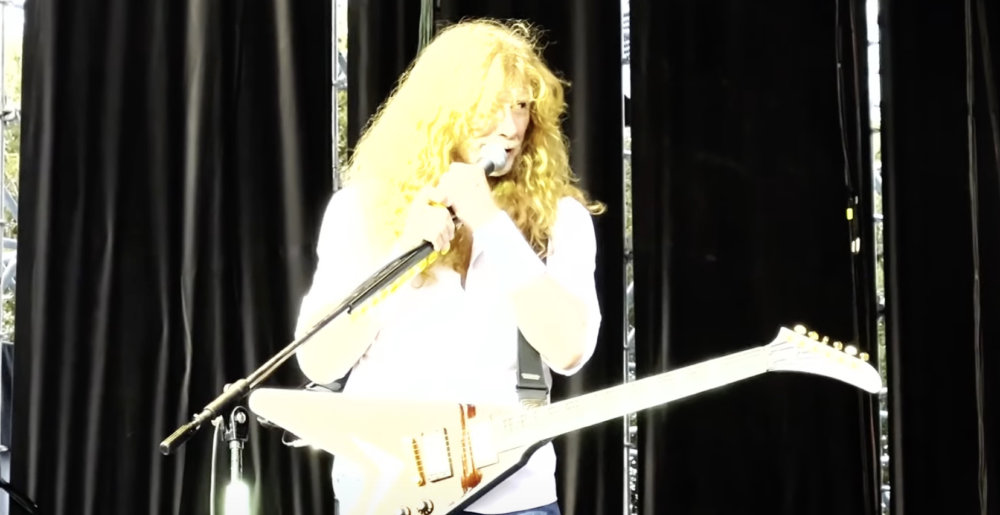 Music festivals have a tight schedule. Given how often one act has to go on mere minutes after another one’s set ends, it’s not uncommon for a band’s to do soundcheck while another band is playing on a stage some 300 feet away. And you’d think that this far into his career, Megadeth‘s Dave Mustaine would understand that, and shrug off the minor inconvenience of hearing another band soundchecking while he’s trying to play. But that recently happened, and instead, he acted like a massive fucking diva about it!

As you’ll see in the video below, during Megadeth’s July 2nd set at the Barcelona Rock Fest, a member of Judas Priest’s crew began the band’s soundcheck. Did Dave roll his eyes and make some simple, off-handed comment? No, as you’ll see at about the 9:10 mark of the video below, he made a big, shitty, Karen-ass spectacle out of it, and flipping the guy the bird and saying the following (as transcribed by Blabbermouth):

“We’ll wait till he’s done checking his guitar over there.

“The last night of the tour — we went all the way to the last fucking night, and then some pussy over on the stage next to us has to start playing while we’re playing. How fucking pathetic, amateur piece of shit you are.

“Can we proceed now? Fucking cunt.”

This, of course, is not the first time Dave has decided to publicly humiliate hard-working crew members. Back in 2015, Dave posted an online video publicly humiliating his own guitar tech. So it’s obvious that Diva Speedball just thinks he can shit on those he perceives as lower than him.

We know a lot of people like to fetishize rock star attitude, but honestly, when it comes with being a mean, entitled dickhead towards the people working behind the scenes, we think that shit needs to die, hard. Dave could’ve easily said something like, Hey, guys, we’re still playing here! and gotten his point across. Instead, he mistreated a member of the crew in front of all of his fans. What a sad, bitter little man.

Metal Sucks Greatest Hits
0 -
Who are teh “BIG FOUR SCENE BANDS”????
540 -
Matt Pike’s Top Ten T-Shirts
0 -
Dimebag Darrell’s Grave Desecrated and Robbed by Shitty Local Band
0 -
Danny Worsnop is a Good Writer
0 -
A Sh*tstain on the Ass of the Universe, #28: Lie or Liar
0 -
Former Attack Attack! Bassist John Holgado is the Stupidest Human Being Ever