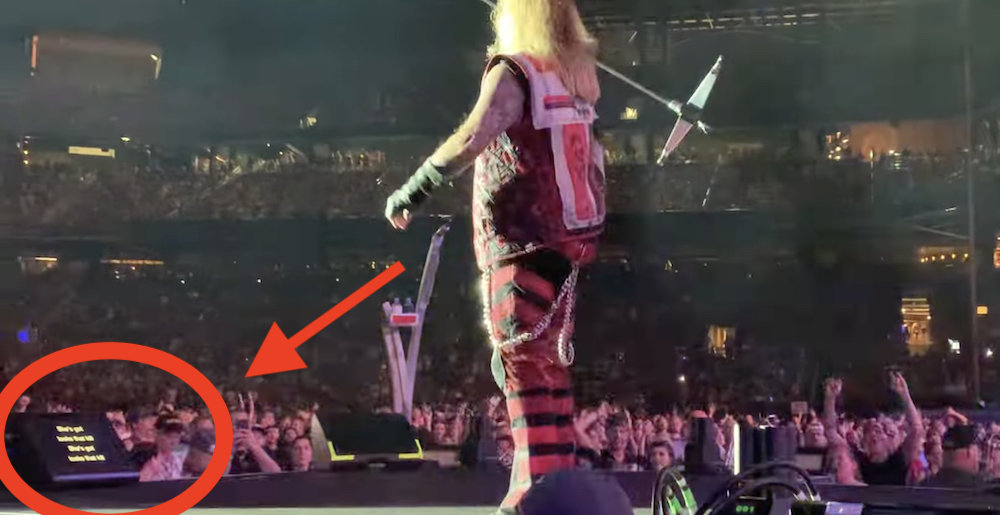 Video: Vince Neil Reads His Lyrics from a Teleprompter for “Home Sweet Home” and “Looks That Kill”

It’s no secret that Mötley Crüe have had a bit of trouble on their current reunion tour. During the first night of their set, Vince Neil had trouble singing, while Tommy Lee had to be replaced five songs in (Tommy eventually sat through an entire show, despite having several broken ribs). Now, a couple of videos on YouTube have revealed that Vince has also been using a teleprompter onstage to remember his own lyrics during the shows.

As you’ll see in the footage below by YouTuber Justin Newton (via Blabbermouth), at the Crüe’s St. Louis show, Vince had the lyrics to his songs projected onto the back of the monitors at his feet. And while Blabbermouth mentions that Vince is not alone in using a teleprompter — Halford and Ozzy both use them as well — it’s worth noting that those dudes have some years on Vince, and that he’s using the device for some big, classic numbers, including “Home Sweet Home” and “Looks That Kill.”

Check out the video below, and get tickets to see the Crüe at one of their remaining dates below:

Metal Sucks Greatest Hits
220 -
Hey Guys, Did You Know That Virgin Steele are From Long Island?
0 -
BREAKING: Joey Jordison Back in Slipknot as Percussionist!
250 -
Worst Year Ever: All of Our 2011 Year-End Sh*t in One Place
0 -
New Candidate for Most Metal Wedding Ever: Bride and Groom Shred Down the Aisle
0 -
15 Ways Your Unsigned Band is Doing It Wrong
690 -
Let’s Argue About Iron Maiden Album Art