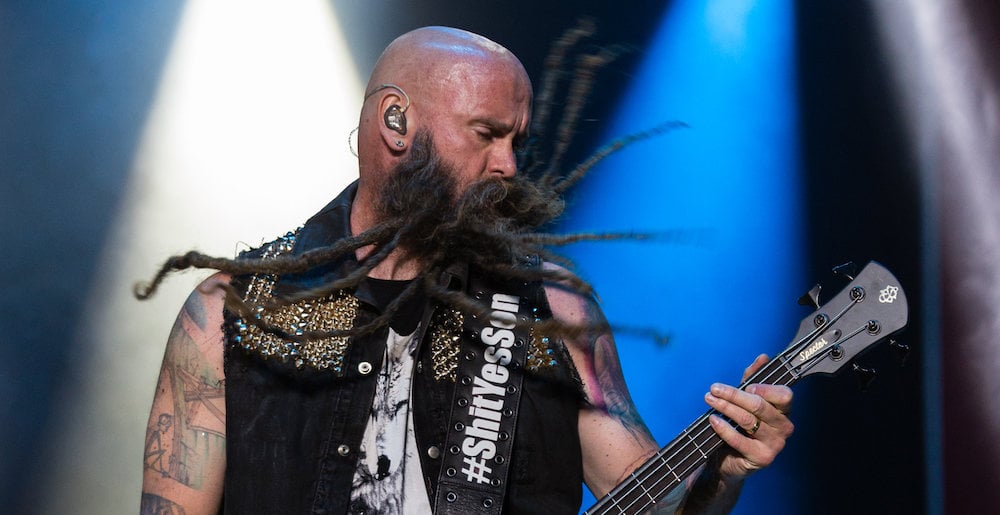 Real talk? We have no beef with Five Finger Death Punch, we just think that their music is wack and their lead singer has previously exhibited all the restraint and steadiness of James McAvoy in Split. But now, FFDP’s octopus-headed bassist Chris Kael (gotta give props to our own Vinnie Bellissimo for that description) has offered MetalSucks a challenge that we feel at least somewhat obliged to accept.

During a recent interview with Metalshop TV, Kael was asked about people shit-talking his band. Here’s what he said:

“When I was a kid growing up, we didn’t have social media, and it was us talking to one another. This is just another form of talking to friends, shit talking bands and whatnot that you don’t like. It’s much easier to get on the computer and do it now and for people to hear that kind of stuff. So I get it. I love it.

“Just recently, there was one story that was on Blabbermouth. Blabbermouth’s the big one that everybody’s always on there shit talking; it’s kind of the vibe over there. I love it. Talk shit all day long. Bring it. Just be original. I don’t wanna hear the fucking dumb shit that I hear over and over again. Be original. Don’t be a hack. Get a chuckle out of me, and I do comment on ’em when it’s a good one. Like, ‘Oh, that one — that one’s good.’ We can make fun of ourselves. I fucking get it.”

First off, that’s not really what Blabbermouth IS. Blabbermouth literally just reports the facts about everything that goes on in metal, with the occasional review thrown in. So if you think Blabbermouth are shit-talking your band, it’s probably because the things your bandmates do and say are incredibly embarrassing. Then again, Kael’s in Five Finger Death Punch, so that tracks.

But second of all: GAME ON, Chris! We know you guys have a new album on the way, so any news that comes out about you, any promotional materials you release in an attempt to further cement your role as the musical idol of every furious bro who secretly just wants to cry in an XXXL T-shirt, we’re gonna go for it! We’re glad to hear you’re so down!