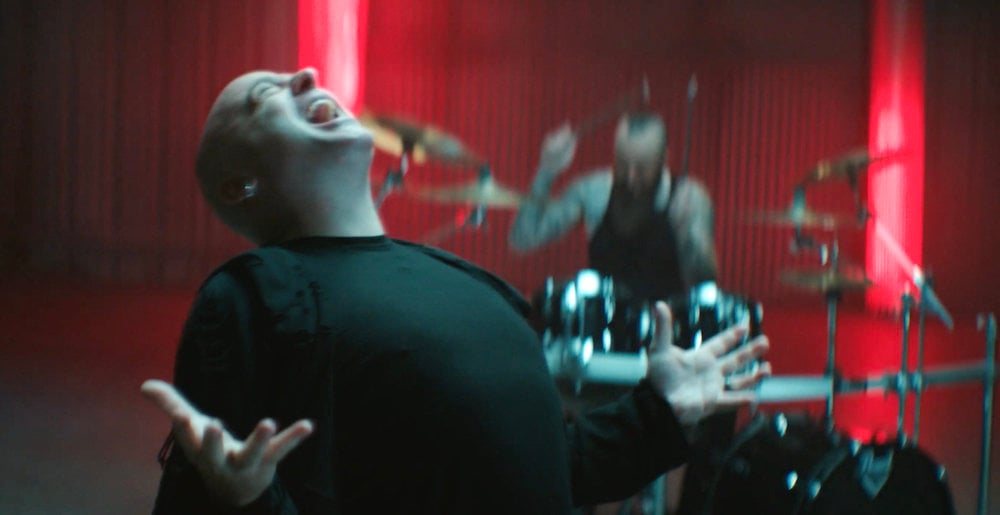 Disturbed Release New Single via Video About — Shocker! — How the Media Is Bad

Hey, guys, did you know that the media is bad? Are you aware that a constant stream of pictures of lives you wish you had and conflicts that make you feel upset is probably not a good thing to spend all your time ingesting? Thankfully, every single metal band in the world has decided that this is the dark-yet-wholesome message they want to convey in 2022. First, we had Septicflesh, and then Behemoth — and now, thankfully, Disturbed, a band led by one of the most prolific Twitter users in modern rock, has decided to take on that subject with their new song and video “Hey You.”

As you’ll see below, the video for “Hey You” takes place in a Matrix-esque sci-fi world, in which people are pitted against each other by being fed a nonstop barrage of The Media. Why? To give their life force to an evil overlord who looks like your average 50-year-old metal fan (it should be noted that actual media moguls and social media billionaires look like Disturbed frontman David Draiman — or maybe it looks like he’s cosplaying them). But slowly, these poor souls realize that if they stop drinking the media Kool-Aid, they too can be happy, normal members of society, not some guy with, ugh, tattoos and a beard!

What? The song? Oh, it’s a Disturbed single. It sounds like the others. Cho-RUS! Sumthin’-sumthin’ a-su-hum-thin’. You know what we mean.

Says Draiman about the track:

“It’s a wakeup call. We’ve become our own worst enemies. Civil discourse has become the exception instead of the norm. People have lost themselves in outrage addiction.”

Hey, remember when Disturbed released a video that promoted murdering members of the media? But yeah, watching footage of the police, that’s the problem.

Check out “Hey You” below and wish it had actually been a Pink Floyd cover.

What the...?? 0
Disturbed’s David Draiman Says Vince Neil Is “Sounding Good, Looking Healthy,” Might Want to Get His Ears and Eyes Checked
July 18th, 2022 at 10:30am Emperor Rhombus

This is just a pretty blatant falsehood.