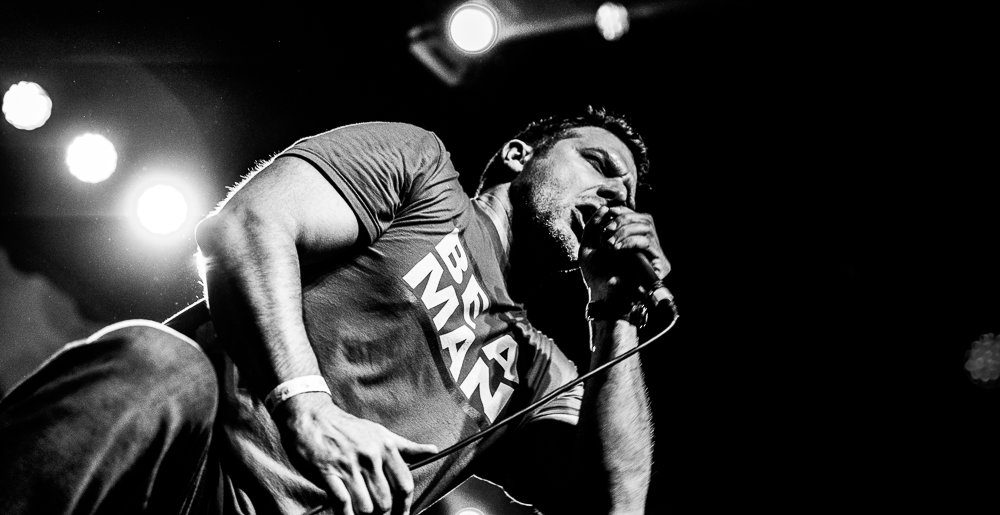 The Red Chord’s Guy Kozowyk on His Musical Origins, Beer Collaborations, and the Band’s Future

Few artists were as important to the development of MetalSucks as The Red Chord. The band’s blurring of genres to create unrepentantly brutal music was hugely influential on the critical-but-earnest approach on which this site was founded. So when the chance came to speak to frontman Guy Kozowyk at this year’s Decibel Metal & Beer Festival in Philly, where the band were performing their 2005 album Clients in full, we had to take it.

In person, Guy is chill, familiar, and easy to chat with. In fact, speaking about The Red Chord’s musical development, this ease seems to be a big part of how their sound grew and flourished.

“What we ran into going to shows [growing up] was a huge separation between the scenes, especially metal and hardcore – at least in like the late ‘90s,” explains Kozowyk. “I used to get a kick out of it, because, when I was in high school, there was a venue in Boston called the Rathskeller, which has since been closed, and knocked down. Well, they used to have all-day shows that would be four different shows – they’d have a matinee punk rock show, you’d have crust punk show like Code 13 or Ass Suck, and then there would be a hardcore show in the afternoon, with the Madball’s, The Blood For Blood’s, just whatever was going on in Boston at the time. In the evening would be a metal show, so we’d get the Napalm Death’s, the AC’s, or a Cannibal Corpse coming through. They used to have it where if you threw down additional money, you could stick around all day. And I was the type of guy that would show up and be there all day, and I kind of liked everything.”

What was the initial inspiration to create The Red Chord’s sound? How has it developed over the years (personally, and as a collective group)?

So, when we first started the band, we were really, really young. Like, we were 19 or 20 at the time, when the early incarnation started coming together. So Kevin [Rampelberg, guitar] and I, in the very beginning, had this other band with a different name, and we were really all about just the most brutal hardcore and most metallic hardcore that we could find. And we were all really inspired and into various death metal, especially the real heavy, “slammy” sort of stuff.

I didn’t really understand the separation [between metal and hardcore] — I was like, If you like this hardcore stuff, why wouldn’t you like Code 13 or House Rotten or Internal Bleeding or Suffocation? But there was definitely a divide stylistically. You wouldn’t really see a lot of crossover.

So, when Kevin and I were starting to jam, we eventually hooked up with Mike [“Gunface” McKenzie, guitar] who was very metal. We started to naturally incorporate this stuff into one sound. It was like, Alright, yeah we could just appeal to everybody, because we like everything. And there was an acceptance with everyone in the metal-hardcore scene, but there was less of an acceptance in the brutal death metal scene, because we didn’t like ‘look the part.’ I feel like that it has progressed in such a way that there’s bands that kind of have combined all of the stuff.

I think in Kevin’s head, he was probably like, I, uhh, you expect me to play this? Like, uhhhh…Kevin had a really quirky style to him, and he was really good with, like, writing good songs that stick with you, but he was a drummer that wrote guitar riffs. And it was cool in the beginning. We just liked a bunch of different types of stuff, and we came from a bunch of different types of backgrounds – and it was just putting it all together, trying to do something that we all would enjoy.

Do you feel like it took a while for the scenes to accept that approach?

Thankfully, the metal scenes were hard to break into, especially at that point in time. There was only so many Morbid Angel shows, and if you’re going to play with Morbid Angel, and you’re not on the tour, chances are there was that one spot to open up, and we were just never getting that. Where, like, the hardcore scene really embraced us, because there were always hardcore shows. There was always 150 hardcore kids that would go to a hardcore show. So, when we finally got some momentum with that, it was like we were able to have something to sustain us. We started going to different places, and playing to 50 or 100 people in places that we’ve never been, because the hardcore scene was a little more open-minded and inclusive to jumping on to stuff.

In regards to your Fixation On Red Ale with Bone Up Brewing, how did that collaboration come about, and what kind of involvement did you guys have with it?

Frankly, when this came together, I didn’t really have any understating of how they were going to do the Metal and Beer Fest. I didn’t realize how intertwined the metal and beer festival would be, as the beer is a huge component to this festival. So we were like, ‘Hey, do you want to do a collaboration with us?’ Not realizing that every band was collaborating with one of the sponsors. We were very excited when Bone Up approached us about doing it, because they were local to where we all grew up in Everett, MA. I grew up in Revere, MA., which was right next door. Mike was from Reading, which was not far away. And one of the guys, Matt Darcy, who works at Bone Up, has been doing photography and covering metal shows, and covering us for like 15 years. So, when I saw his name, I was like, ‘Oh, I know Matt!’ We could make sure that people actually liked the product.

So when they sat down, it wasn’t just, like, ‘Hey we have this idea for this, we’re just going to slap your name on the can.’ We sat down with them for an hour, and were like, ‘Hey, would this be pertinent for you?’

That sounds like an awesome experience. Did you guys do much tasting, going back and forth?

There wasn’t too much back and forth, but we sat down with them for an evening, and we went over everything. Once we came to a conclusion, they were like, ‘I think we can hammer this!’ They came up with something, and sure enough, we liked it! They were actually excited, when we were like, ‘We don’t want to do an IPA.’ I know a lot of bands are into that, I want something where you can taste the hops! No, I want something that you can drink and enjoy. I didn’t want something like a 10% alcohol. I want something to sit and enjoy. So when we put this together, I was pretty excited! We went down, did the tasting, the guys went down and actually helped them can it and everything. It was great! We really just get them as human beings.

Is there a possibility that your beer might be sticking around?

They said that they were completely open to it. I think that their mentality would be to base anything off of like, ‘Well, like, how fast is thing going to go?’ So, hopefully it’s something they just blow through and they keep it out there. Because we just like the idea that it’s there. We like good people doing things that are in line with our values.

Are there any other particular collaboration beers that you’d like to spotlight here?

If you see our drummer floating around, he is the dude to ask! He really likes the Widow Maker. Dude’s got an app on his phone and he like checks it every single time he goes to a brewery or something for tasting a different beer. He’s like up to something around 200 to 300 different types of beers. I’m like, ‘I’ve never drunken more then 1,500 beers in my life, dude.’ I’d be the wrong one to ask.

And what about playing live — is there any inclination to expand this live effort?

Well, right now, we have three shows this year — I’ve been telling these guys that I don’t want to do anything for arbitrary reasons. So, these three shows that are going to be very standalone. We’ve got something scheduled in Massachusetts at the end of the summer that got announced on Thursday with Anthrax, At The Gates – yeah, we’re doing Furnace Fest. After that, it’s more that we want to have a purpose to anything, whether it’s releasing vinyl, or getting together in the same room and releasing some new music. But we’ll be quiet until we actually have a little bit more going on to justify us getting out there. It won’t be like, ‘Oh hey, by the way, we’re just going to play this show for no real reason!’

Yeah, I can get behind that.

I’m hoping that – and we’ve discussed this a little bit — I’m hoping that we can put our heads together, and that this leads us to something else. Because, I love these dudes, and it feels good playing, it feels good just jamming. It’s just a matter of getting us all in the same place. You know, just focusing creative energy, and doing something beyond us!