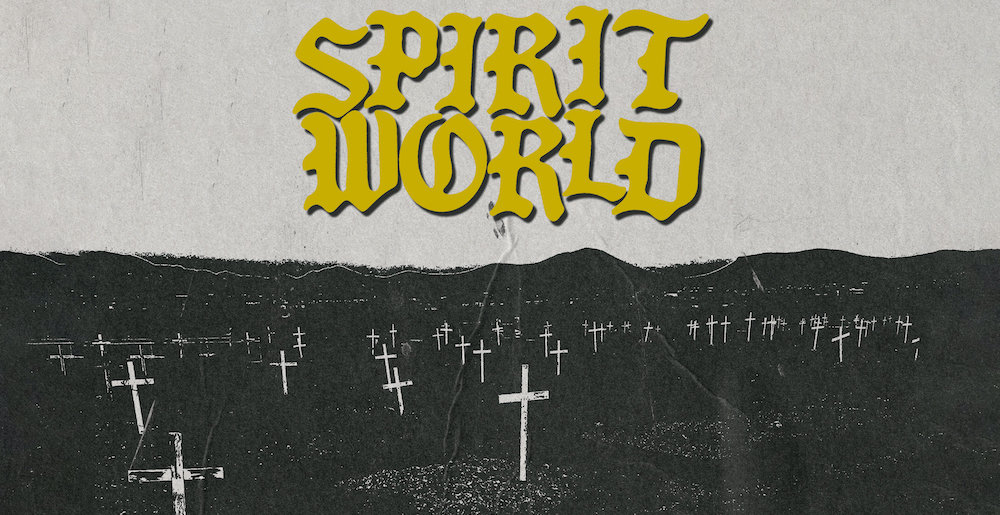 If you didn’t get the memo when SpiritWorld dropped the absolutely killer Pagan Rhythms in 2020 or when Decibel tapped them for the Decibel Magazine Tour 2022, get the memo now: SpiritWorld are a need-to-know band. The crossover death/thrash/hardcore unit have dubbed their style “death western” and they’ve unleashed their latest single, “Moonlit Torture,” which features Integrity singer Dwid Hellion.

Integrity’s influence on SpiritWorld has always been super obvious—in addition to playing a metal/hardcore hybrid, the Las Vegas-based band have long flirted with religious imagery in their art and lyrics. It was only natural for Hellion and SpiritWorld to collab at some point, as frontman Stu Folsom said via the band’s Facebook page:

“Crazy story. Many moons ago, my older brother Nick and my twin brother Beez and I went to a record store to buy Rage Against the Machine’s Evil Empire the day it came out. The record store had these listening stations set up with headphones and a set of selector buttons to switch between CDs. I saw the Pushead cover artwork to Integrity’s Humanity is the Devil, hit play, heard ‘Vocal Test’ for the first time and bought that motherfucker immediately! Hands down the most aggressive, insane shit I had ever heard. ????

“At the time I had hand me down cassette copies of 7 Seconds’ The Crew, Black Flag, Misfits, etc, etc. But I had yet to realize that Hardcore Punk was its own thing.

“Turns out that was the first album, the gateway drug if you will, from a real hardcore band I ever bought with my own money. I’m sitting in the Czech Republic as I’m typing this, my band is playing Brutal Assault today with At The Gates, Clutch, etc. And we got Dwid singing on our new song…”

“Keep your eye on SpiritWorld because the apocalypse is about to be fully unleashed! I feel honored to have been invited up to testify on their pulverizing new sermon, ‘Moonlit Torture‘. Unleash the fiend within!”

If the pitch “If Integrity, but heavier” does anything for you, press play now. There are lots of chances to see SpiritWorld live too, an activity which comes highly recommended.

Sponsored Links from Across the Internet
Show Comments
Related Articles
Shit That Comes Out Today 0
Sh*t That Comes out Today: November 5, 2021
November 5th, 2021 at 8:20am Jeff Treppel

The Decibel Magazine Tour is back and as awesome as ever.

New Stuff 0
Current and Ex Members of Sepultura and Integrity Team Up in Corroded Spiral
October 26th, 2021 at 10:52am Axl Rosenberg

Metal Sucks Greatest Hits
0 -
New Candidate for Most Metal Wedding Ever: Bride and Groom Shred Down the Aisle
0 -
Joey Jordison Claims He Was Fired from Slipknot Via a Singing Telegram
0 -
Exclusive Interview: Damien Echols of The West Memphis Three on His Life After Death
0 -
This Dude Sounds EXACTLY Like Layne Staley
0 -
Meet Hatebreed’s Smallest Fan
1,2110 -
The 101 Rules of Death Metal