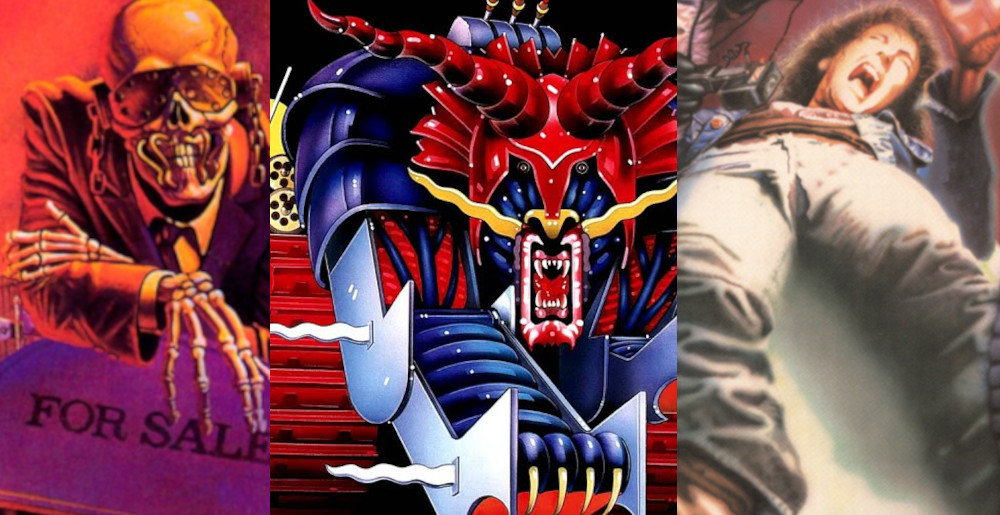 More than 36 years after its initial release, “Master of Puppets” has effectively become 2022’s feel-good hit of the summer. A perfect storm of meme culture, the latest season of Netflix’s Stranger Things, and TikTok-addled attention spans caused the track to break the Billboard Hot 100 for the first time last month and become one of the most popular songs on Spotify. Metallica has even gotten in on the craze, using the scene as a live backdrop and releasing an accompanying lyric video.

But even the B.C. Rich-slinging hesher Eddie Munson would agree that the mid-80s were a golden age of heavy metal and thrash. Sure, Metallica make sense as the safe option for the scene and “Master of Puppets” stands the test of time, but there are scores of loud, fast, and heavy songs that could just as easily serve as a killer diversion in the Upside Down. Here are just a few of those tracks…

We start with Metallica’s direct competition in Megadeth’s “The Conjuring.” This song about rituals fits right in with the situation leading up to the showdown with Vecna. Truth be told, a good number of Peace Sells… But Who’s Buying? tracks would work well here.

Still, “The Conjuring” sports the kind of ethereal intro that could serve as great backing music for the kids’ preparations, though Dave’s spoken word section would likely have to be muted to make way for any dialogue. It would all come to a head with Eddie ripping right into the song at the 51 second mark—right after “obey” cuts through the air.

By the time season four takes place, the scourge of “Satanic Panic” has touched everything from Dungeons & Dragons and comic books to our beloved metal music. Nancy Reagan and the Parents Music Resource Center (PMRC) launched a crusade against artists that put out what they deemed to be too dangerous for America’s children. Naturally, this put Ozzy directly in their crosshairs. That kind of notoriety would only make him cooler in the eyes of someone like Eddie, who would have gravitated to Jake E. Lee’s excellent guitar work.

Sure, “Shot in the Dark” was the bigger hit, but “The Ultimate Sin” hits on themes of fighting back against a power hungry entity—which maybe would have been a bit on the nose, but it would have been pretty fucking badass.

It may not be Dave Lombardo’s favorite track, but let’s be real for a second. From the epic drum intro to the shredding riffs and nearly nonsensical solos, Slayer’s “Raining Blood” was practically written for the crimson-hued backdrop of the Upside Down.

Literal hell bats tear ass to get to Eddie and Dustin during the scene as red lighting crackles all around them. What more needs to be said? We’ll just take some artistic liberties and ignore the fact that the album came out nearly half a year after the season takes place.

Metal Church’s “Ton of Bricks” off of The Dark is a threat—no, a promise—that the kids of Hawkins, Indiana are going to take down the big bad. The specter of the Upside Down is an ongoing theme in the show and for once this heavy metal showdown is a turning point for all involved. This song sets a constant pace and drives forth a defiant tone that not only shows the kids’ resolve, but could have introduced people to a band that’s often overlooked by the mainstream.

By 1986, there were few bands more influential in the metal scene than Judas Priest. Sure, the quintet released Turbo in ‘86, but that LP seems too synthy for a battle vest wearing thrasher like Eddie. Look no further than “Jawbreaker” on Defenders of the Faith for the epic showdown.

Listening to the lyrics, the song gives off an “all or nothing” vibe with constant references to an impending strike and a pent up aggression that’s ready to boil over. It would also make sense that an avid guitar player like Eddie would have a couple Priest songs in his repertoire for just such an occasion.

Sure, Eddie probably liked Black Sabbath more when Ozzy fronted the band, but no one can deny the driving riffs that Tony Iommi brings on this track. Remember that this scene is all about Eddie’s music being a distraction, so why not have a tribute to the “legions of the brave” be the driving tune that gets everyone pumped up?

Aside from likely being named after Iron Maiden’s iconic mascot, Eddie has already professed his love for the band. Yes, this is music and “2 Minutes to Midnight” is a killer track that many people already know thanks to Grand Theft Auto: Vice City.

The track features macabre descriptions of the horrors of war and death. Couple that with the fact that the track’s title is also a reference to the Doomsday Clock along with the fact that a clock can be heard when Vecna is near, and you have a very ’80s classic that would have sent shivers down any demon’s spine.

If you liked “Master of Puppets” for its fast pace and badass guitar work, then “Bonded by Blood” by Bay Area thrashers Exodus also fits the bill. Though it would need a remaster to adjust the vocals’ location in the mix, “Bonded by Blood” is a thrash metal classic that many people in the mainstream aren’t aware of. The song’s theme surrounding black magic rituals and heavy metal would sound right at home in the Upside Down. The riffs are fast, loud, and unrelenting. Perfect for a very metal distraction.

The threat of nuclear war was constant in the ‘80s as the U.S. struggled with the U.S.S.R. to be the world’s sole superpower. That geopolitical struggle is also front and center in the show, though going too far into it here would be a pretty huge spoiler. Still, many songs dealt with the subject matter, often depicting scenes of desolation, ruin, and despair after the bombs drop.

Anthrax’s “Aftershock” not only ticks both boxes, but just like “Master of Puppets” it features an undeniable rhythm section and soaring guitar solos that would grab anyone’s attention.

Okay, now this one is a bit of a stretch. S.O.D. would likely never clear Netflix’s Standards and Practices department thanks to their often offensive lyrics, making it an extremely unlikely choice for the scene. But if there were some way to get this done, these tracks seamlessly play into each other, with the “March of the S.O.D.” working as a buildup piece of music that leads to the fast and persistent barrage that “Sargent ‘D’ and the S.O.D.” provides. Again, a lot of the lyrics would have to be cut to meet censors’ guidelines, but the music speaks for itself.

News 0
James Hetfield Fulfills the Rich Old Man Stereotype by Getting Into the Cigar Business
October 2nd, 2022 at 9:00am Mandy Scythe

Metal Sucks Greatest Hits
540 -
Glenn Danzig Shops for His Own Kitty Litter
0 -
If You Like Bass Dogs, You’ll LOVE Drum Fish
0 -
Meet Hatebreed’s Smallest Fan
1480 -
Being in a Band is for Losers [Scientific Proof]
0 -
A MetalSucks Exclusive: Return from The Graveyard — King Diamond on His Near-Death and New Life
0 -
MetalSucks Readers Declare Pantera The Most Unnecessarily Shat Upon Band in Metal!!!