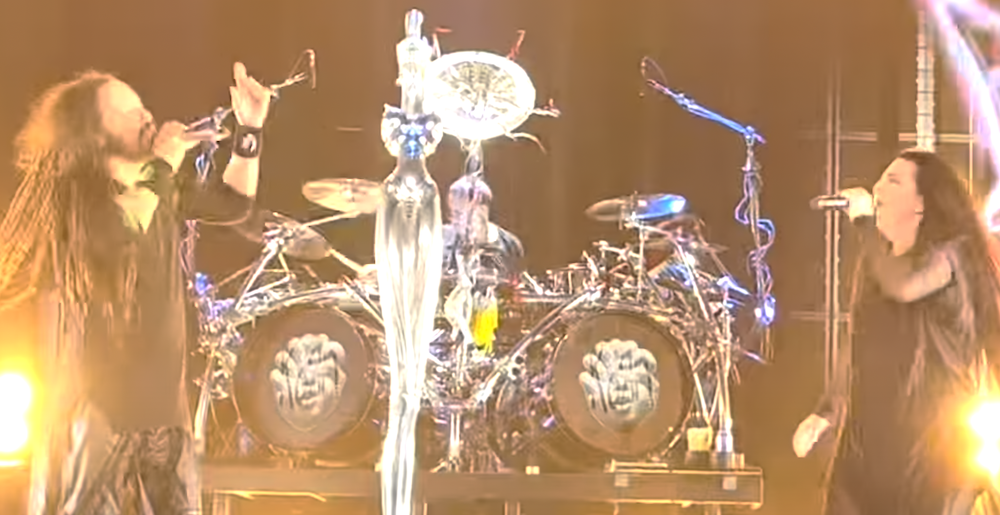 There aren’t really any better nü-metal duets than Korn and Amy Lee‘s version of “Freak on a Leash,” largely because the genre doesn’t often get any participation from vocalists on the Evanescence singer’s level. Originally performed in 2006, the duo’s version of “Freak on a Leash” was an acoustic performance for Korn’s MTV Unplugged set… until now.

Last night, August 16, was the kickoff for Korn and Evanescence’s United States tour. At the end of Korn’s set, they brought out Lee to perform a full-band rendition of “Freak on a Leash,” which you can watch via fan-filmed videos below.

“Freak on a Leash” was originally included on Korn’s 1998 studio album, Follow the Leader. Both Korn and Evanescence are touring on new releases—Korn’s Requiem and Evanescence’s The Bitter Truth, their first original music in a decade.

When the tour was originally announced, Lee said:

“I fell hard into Korn’s music in high school. It was an inspiration during the formation of my own band. The chances we’ve had to play together over the years are special, a part of our history. They remain one of the best live bands I’ve ever seen. It’s an honor and a thrill to go out with our friends again, our first full tour together since ‘07. We’re all really looking forward to this.”

The tour picks back up tomorrow in Missouri.

Metal Sucks Greatest Hits
0 -
Listen: Every Dillinger Escape Plan Song Played At Once
880 -
The Looks That Kill: God Forbid’s Doc Coyle on the Role of Image in Music
0 -
Video: Dudes Rockin’ Out to Van Halen Meet David Lee Roth, Have No Idea Who He Is
1,2110 -
The 101 Rules of Death Metal
0 -
Chris Brown Thinks Municipal Waste are a Fashion Statement
0 -
Meshuggah’s Jens Kidman is Now a Meme