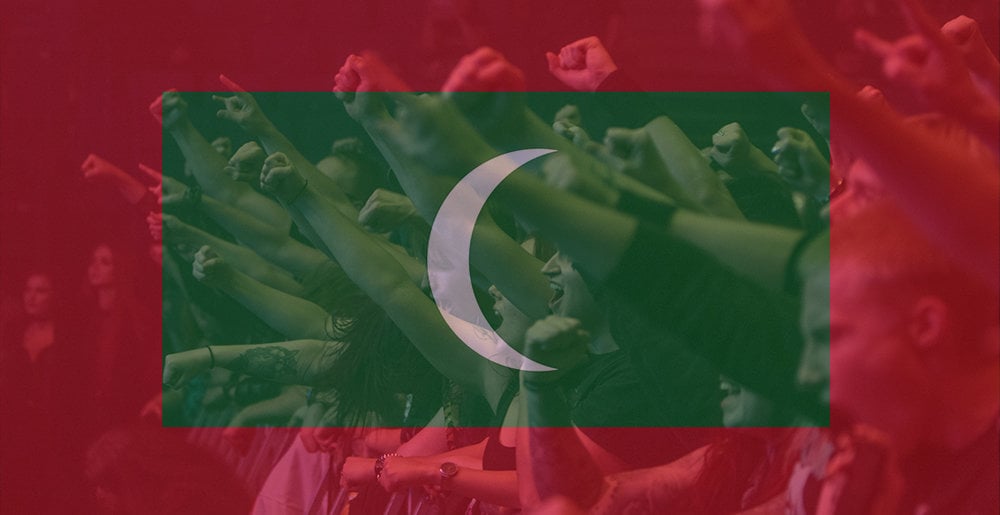 International Mosh: Discovering Metal on the Treasure Islands of Maldives

Ah, the Republic of Maldives – a bucket list vacation spot for many. This archipelagic state located in the Indian Ocean is known as the smallest Asian country with 1,200 little islands to explore.

What do people listen to in Maldives? Boduberu, a form of indigenous music, is quite popular – first appearing in the 11th century and having East African origins. But when it comes to rock and metal, Maldives does have a handful of bands and a few festivals, though there aren’t as many metal bands as there are islands to cover here.

Additionally, international metal bands rarely play the islands. Arch Enemy were the first international band to play Maldives when they played the Rockstorm Festival in 2010. And while you’ll find people moshing at these shows, but it’s doubtful you’ll find people drinking, as alcohol is banned in the country and is only available on resort islands.

While the pickings are slim, metal does exist in Maldives. Here are ten bands to check out if you visit the tropical paradise on your next vacation.

Nothnagal were by far the most famous band to come out of Maldives. Formed in 2006 in Malé, Kaafu Atoll, they were signed to Season of Mist just in time for the release of their 2010 album Decadence and the follow up EP, Nothnegal.

Their high profile allowed them to tour the globe several times over, playing in over 30 countries. Although broken up, the band’s output is well worth checking out, with their Decadence album telling the story of a water world controlled by AI, complete with industrial hooks and other surprises.

Fasylive is probably the hardest band to pin down on this list. They are certainly the most commercial, with the live version of the band blending several genres of music aside from metal, such as world music and pop to make their brand something quite accessible at times. The band is led by guitarist/vocalist Fasy.

Live, they are also often joined by guest singers, but to get the full metal Fasy, check out their album Vengeance, which sounds a bit similar to Anvil.

Upon seeing the band’s name, it’s hard not to think of the Slayer song released in the ‘90s. Dittorehead also play thrash, having released one EP in 2010 called Damnation, and while not up to the same quality as Slayer in terms of production, the band does have some chops.

Like a few of the Maldivian bands listed here, Dittorehead’s current status is unknown and there are few traces of their existence on the internet, though perhaps their fans have stories of their shows a decade ago.

Black metal bands within Maldives are few and far between, which is a shame because Fini, which means “cold” in the native language of Dhivehi, are one of the more interesting bands on the islands.

Formerly known as Absa, the band named was changed to this frostier incarnation to reflect the themes that are found within the black metal compositions found within their first EP, Cold in our Hearts. The two songs found here reflect just that – cold hearts in a very hot place.

Before Fini snowed the beaches of Maldives, Hellbrewed were cooking up a simmering pot of blackened death metal for the leather-clad locals. The heavily corpsepainted band formed in 2010 and released one EP in 2013, the hidden gem of a release entitled Hihsu. The status of the band is currently unknown, though God knows the country needs more black metal.

On a dusty concrete wall in Malé, Kaafu Atoll is scrawled the word Tormenta – a sign that there is indeed a thrash community thriving within Maldives. Forming in 2008 and releasing just one LP in 2010, Tormented Souls, Tormenta, while having the rhythm of thrash, take a lot from the new wave of American metal, sounding at times like Lamb of God’s Maldivian cousin — which makes sense since there’s a video of them covering “Laid to Rest.”

The islands have produced a guitar virtuoso who very may well carve his own legacy in the sands. Shahyd Legacy (Ahmed Shahyed) is this Maldives-based neo-classical shredder and since 2012 he has produced five full-length records, with his latest, Stasis, he presents one more masterpiece to sit with his others on lounge chairs on the beach.

Shahyd also lends his guitar expertise to bands Mystic Wonders and Sacred Legacy, while also appearing on other bands from the islands’ tracks, such as Locura’s “The Man-Made Extinction.”

Mystic Wonders is the heaviest band involving the aforementioned Ahmed Shayed. Mystic Wonders showcases Shayed’s talents against a crunchy backdrop with crispy, In Flames or At the Gates-style vocals on top.

Since their formation in 2014, one full length has been released by the group, Prophecy of the Chosen, while a single, a perfectly passable cover of “Eye of the Tiger” was put out later in the same year.

Sacred Legacy is the last of the three bands featuring the guitar hero from Maldives, Ahmed Shahyed. Sacred Legacy have been around since 2006 and the band showcases Shahyed’s thrash influences, while the vocal style of Sacred Legacy leans towards melodic death metal.

With Shahyed in the band though, the guitar work eventually goes into flashy, progressive realms within songs, and because of these elements, makes Sacred Legacy a unique band to listen to and not just your run of the mill tropical thrash act.

Locura is a melodic death metal band founded by guitarist Rizan Ismail. On the band’s YouTube page, Ismail has posted, other than Locura songs, guitar covers of songs by Testament, Sepultura and Slayer. The band’s other members, besides Rizan, seem to be a revolving door of members as each song has different credits. On the track “The Man-Made Extinction”, Ahmed Shahyd of Shahyd Legacy lends his licks and studio to help beef up the track.