Metal Sucks
Metal Sucks Are Corey Taylor and Jim Root Working on a New Project? Grab Your Copy of An Extremely Rare Variant of...
- Tweet SHARE
Enlarge
But What Does Corey Taylor Think? 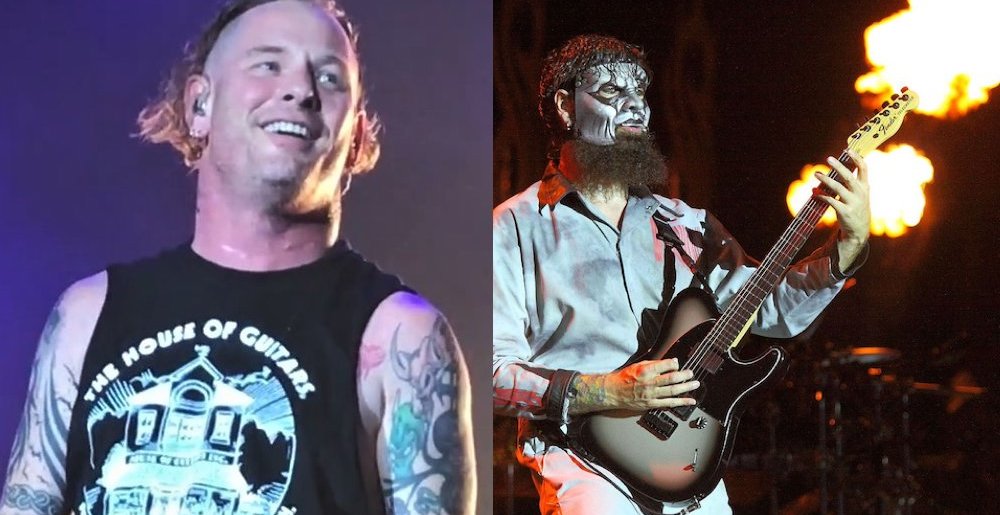 Root and Taylor via Wikimedia Commons.

Are Corey Taylor and Jim Root Working on a New Project?

This revelation comes as a surprise because Root and Taylor haven’t always had the most amicable of relationships, with the latter firing the former from Stone Sour in 2014. Taylor says that it’s water under the bridge now.

“He and I are very different people, and we were both going through our own shit in life. We reconnected, and we’re actually talking about doing some stuff on the side, outside of Slipknot and Stone Sour.

“It’s cool to find your friend again,” he continues, “and realise that you can find your way back to people that you care about. Honestly, I can’t sit here and say that I wasn’t responsible for some of the bad feelings. That can only come with self-reflection, and the fact that the things that were going on in my life rippled and affected other people. Once you own up to that, you can start to mend bridges by showing people that you are truly sorry.”

It’s a good thing the two musicians reconnected, because Slipknot’s latest album, The End, So Far, comes out at the end of this month. Their latest, slow-burning single “Yen” was released in August. In the same interview with Metal Hammer, Taylor explained the meaning behind the new song:

“Yen is actually slang for yearning. It’s old school, but I liked the application, because the song is about that yearning you have for the person you’re actually with, which is a very distinct and different yearning from the yearning for the people that you don’t have. To me, that’s why this song is worth singing about; it’s about my wife, and she brings things out in me that I never knew existed.”

You can also listen to “The Dying Song (Time to Sing),” the first single from The End, So Far.

Metal Sucks Greatest Hits
0 -
Metal Musicians Reacts to Maroon 5’s Lame Super Bowl LIII Halftime Show
220 -
Hey Guys, Did You Know That Virgin Steele are From Long Island?
0 -
Chad Kroeger and Avril Lavigne Finally Wrote a Song So Awful that the Internet Has Collectively Rejected It
8790 -
The Top 39 Annoying Things That (Local) Bands Do
0 -
Anthrax’s Frank Bello is Really Excited to Be Here, Not at All Concerned About Swallowing Bugs
0 -
A MetalSucks Exclusive: Return from The Graveyard — King Diamond on His Near-Death and New Life