Metal Sucks
Metal Sucks 11 Metal Duos That Challenge Our Perception of Heavy Music There’s a New In Flames Album Coming and We Have an...
- Tweet SHARE
Enlarge
Br00tal-lists 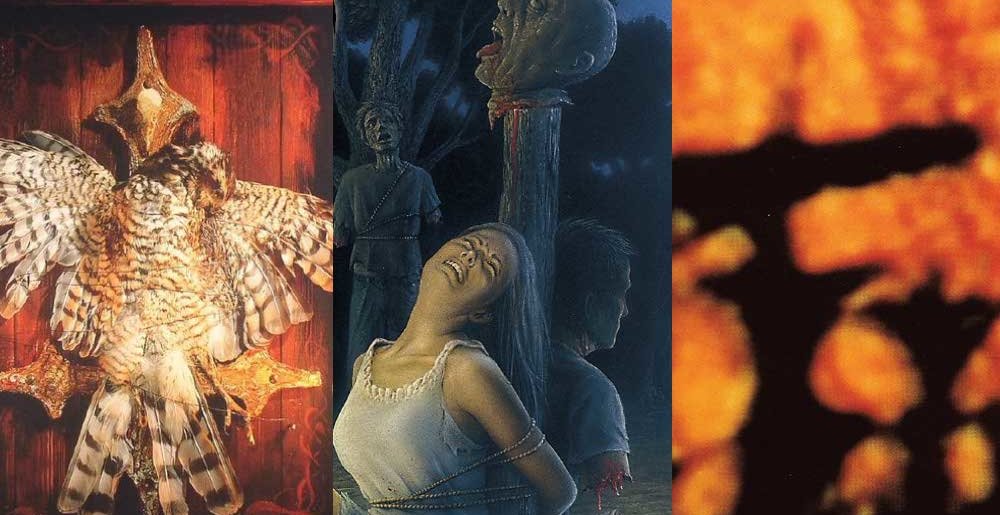 11 Metal Duos That Challenge Our Perception of Heavy Music

When you think of heavy metal bands, you usually think of a pretty traditional setup: one guitar (maybe two, three if you’re Iron Maiden), one bassist, one drummer and maybe a singer, if someone else isn’t already. That’s how Napalm Death does it and if it’s good enough for Shane Embury, it should be good enough for you, right?

While that formula works for plenty of bands, the duo in extreme metal has always been fascinating. The ways in which two musicians can manipulate sound and write songs that hit as hard as a five-piece lineup are astounding, which is why MetalSucks is taking a look at some of our favorite duos.

Whether making classic second-wave black metal, pissing off purists with albums like Rebel Extravaganza and Now, Diabolical or collaborating with painter Edvard Munch, Satyricon have always been on the cutting edge of the Norwegian and global black metal scenes. Though they worked with other musicians in the ‘90s, the last 25 years have been all about drummer Frost and guitarist/vocalist Satyr.

Industrial metal pioneers Godflesh challenged the sounds that a metal artist could be and they did it as a pair. Frontman and multi-instrumentalist Justin Broadrick and bassist G.C. Green have written many, many pages of the industrial metal gospel with their own hands, from stone-cold classics like Streetcleaner to wildly-underrated cuts like Pure, to newer essentials like 2017’s Post Self.

Seattle duo Pound embody the best of Meshuggah, Botch and whatever other old-head ‘90s mathcore bands your cousin saw in 2003. Sans vocals, the guitar/drum duo rely on rhythms and an earth-shatteringly heavy tone to convey their point. Song titles are in rudimentary drum tablature, encouraging you to think less and riff harder.

Black metal’s reclusive nature lends itself well to studio projects and those who rarely play out, which is exactly the case with Darkthrone, who last performed live when Little Dave was still in Megadeth the first time. The black metal trailblazers have experimented with a ton of different takes and styles on their sound over the years and they’ve got another one on the way next month.

The gods of gore and horror movie samples became a two piece with a drum machine by the time the 1993 Mortal Massacre comp was released on Relapse. Mortician have seen a resurgence in popularity over the last decade, because who doesn’t love cheesy horror samples mixed with straight-up brutality?

Do you like amps? Telekinetic Yeti looooove amps. The duo hail from Dubuque, Iowa, but you could probably hear them practicing in Austin. Following the path of Sleep, Electric Wizard and Bongzilla before them, Telekinetic Yeti write bluesy stoner tunes filtered through walls of fuzz and amplification. Unlike the aforementioned influences, though, the Yeti know how to write songs of a reasonable length.

The music scene in Denver is hotter than magma right now, giving us bands like Primitive Man, Blood Incantation, Spectral Voice, Oryx and Pathos & Logos, whose music hits a similar spot to Animals as Leaders and Periphery but with more shine. 2022’s Cult flew under the radar but showed a significantly heavier side of the band.

Stoner/sludge unit Big Business have been plying their craft since 2004, cutting down to a duo before 2016’s Command Your Weather. They’ve done two albums and an EP in that format, proving that a reduced lineup doesn’t have to mean the end of a band.

Pain is forever, but so is the victory of releasing an incredible fucking album, which is exactly what Mantar did with this year’s Pain is Forever and This is the End. The duo—who say they consider themselves an extreme band but not a metal band—show their love for everything from doom, sludge and crust to black metal to classic rock on Pain is Forever, a welcome evolution of their dismal sound.

It’s no easy task to put industrial, grindcore, black metal and death metal in a blender and have it come out sounding good, but Anaal Nathrakh make it happen. From their debut demo, Anaal Nathrakh have been punishingly fast but recent years have also seen the band experiment with new sounds, finding fresh ways to sound totally inhuman.

Progressive-something outfit Four Stroke Baron meet in the middle of rock and metal on their new album, Classics. Mixed by Devin Townshend, the album pulls from synth pop and new wave in addition to heavy music. If you like your doomy rock to have a bit of theatrical flair to it, Four Stroke Baron might be your new fav band.

New Stuff 0
A New Darkthrone Album is Coming This October and We’re Pumped
September 7th, 2022 at 11:54am Hesher Keenan

One of Norway’s biggest exports is back.