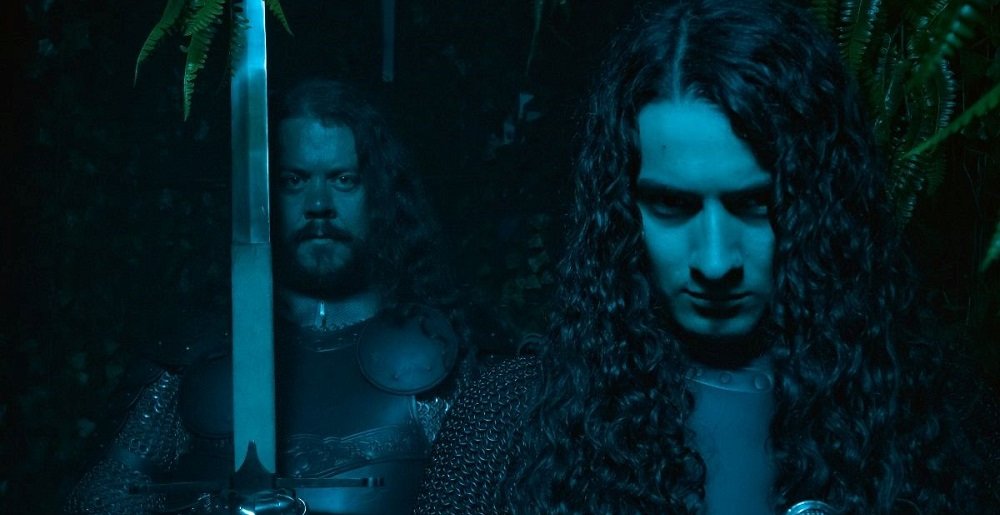 The second single from the upcoming Stormruler album, Sacred Rites & Black Magick, has finally made the light of day with the release of a lyric video for the album opener “Internal Fulmination Of The Grand Deceivers.”

After listening to the song, if you like epic black metal tales of victory and war, you’re going to absolutely dig Stormruler.

Comprised of Jason Asberry (vocals/guitars/bass) and Jesse Schobel (drums/vocals), the St. Louis, Missouri-based black metal duo received critical recognition for their debut effort Under a Burning Eclipse last year. With this new release, which was produced, mixed and mastered by Gabe Usery at Encapsulated Studios, the band says the new music “weaves epic tales of war, history, black magick and sorcery beyond the standard confines of black metal.”

According to the band, the choice to put “Internal Fulmination Of The Grand Deceivers” front and center both on the CD and as a single was a deliberate one.

“Fulmination was chosen both as our next single and as the album’s opener for the attention that it demands and the journey upon which it will take the listener. It has a commanding delivery carried triumphantly by its soaring leads, stoic howling vocals and ice cold trem. An embodiment of what we consider to be true imperial black metal warfare.”

Sacred Rites & Black Magick will release on October 14, but preorders are available today via Napalm Records.

1. Hymns Of The Slumbering Race
2. Internal Fulmination Of The Grand Deceivers
3. Adrift Dark Halls Of Vinheim
4. To Bear The Twin Faces Of The Dragon
5. In Light Of Paleblood
6. Entranced Within The Moon Presence
7. Invocation Of The Black Sacrament
8. Sacred Rites & Black Magick
9. Oathpact
10. Ten Heralds, Ten Desolations
11. The Waters Of Iolamita
12. In The Shaded Vlasian Forest
13. Amid A Smear Of Crimson Cloud
14. Apparitions Across The Ravencrest
15. Sanguinare Vampiris
16. Upon Frozen Shores
17. Shadow Of The Golden Eagle
18. Along The Appian Way
19. By Winters Long Passed
20. A Malice Dead & Cold

New Stuff 0
New Warbringer Video Gets You “Crushed Beneath the Tracks” Before Their West Coast Tour
September 12th, 2022 at 10:35am Hesher Keenan

Let 60 tons of thrash metal goodness roll over you.

New Stuff 0
Set to Join Gwar on Tour This Weekend, Nekrogoblikon Released a Video for “Bones”
September 9th, 2022 at 11:19am Hesher Keenan

There’s nothing short about the badass.

Metal Sucks Greatest Hits
0 -
Chris Brown Thinks Municipal Waste are a Fashion Statement
0 -
Editorial: The Metal Community Must Stop Letting Phil Anselmo Off the Hook for His Racist Remarks
0 -
Incredibly Metal Six-Year-Old Girl Terrorizes America’s Got Talent
0 -
I, For One, Welcome Our New Robot Overlords
0 -
Website Photoshops Dogs in Place of Bass Guitars Because Why Not?
0 -
The Best Metal Albums of 2013, As Chosen by Metal Musicians Themselves — Part I: Machine Head’s Robb Flynn