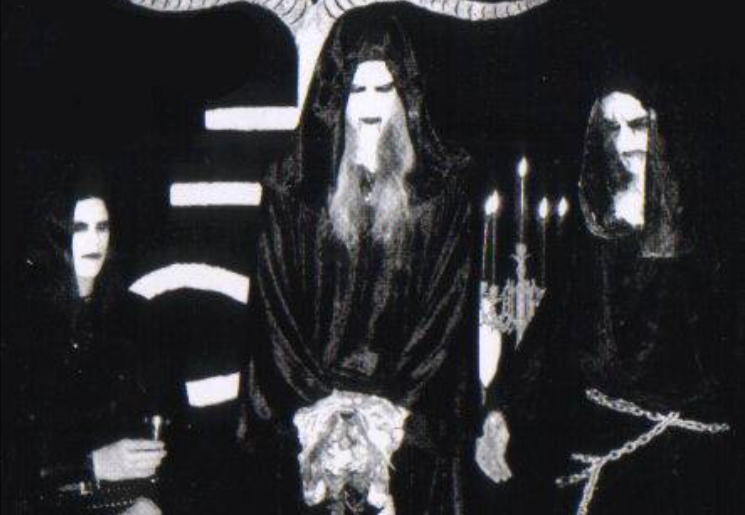 Most black metal experts will agree that the subgenre began losing its power in 1993 — “a year of misery,” to quote Nargaroth. After the murder of Mayhem‘s Euronymous, the media attention that the BM scene received resulted in an influx of posers and tourists known as “blackpackers.” Overall, BM would become less brutal and more commercial. Yet, so many debut and influential albums by classic bands were released in 1994, such as Burzum‘s Hvis lyset tar oss and Gorgoroth‘s Pentagram. The pain, loss, and isolation due to surveillance, interrogations, and a general sense of paranoia inspired Darkthrone‘s Transilvanian Hunger in particular. The 1994 debut records by Emperor and Enslaved are a different story: these outfits would take BM in a very different direction.

If the Oslo and Bergen scenes paradoxically showed a burst of creativity at the onset of their decline, Trondheim would become BM’s new center of “truth” in the early 2000s, as the “Nidrosian black metal” movement flourished. You might remember that Nidaros Cathedral is represented on the cover of De Mysteriis Sathanas Dom Sathanas (1994). Varg Vikernes and Euronymous allegedly wanted to blow up this monument of supreme beauty and strength. However, the stone construction would have thwarted their plan.

Nidrosian black metal is often defined by mysticism, ritualism, hearsefuls of atmosphere, raw aggression, and melody. It often reeks of the torture chamber, candles, and incense. Nidarosian groups often add a little finesse while avoiding sounding modern. Although keyboards often feel out of place in BM, the Nidarosian players are creepy enough to make them work. You might hear chanting and synths. Trondheim’s finest are distinguished by their individuality, despite the high level of incest within the scene. Thus, today’s list does not exclusively focus on typically “Nidarosian” bands.

We’re truly excited to present some of the best and most eccentric artists that metal has to offer. Allow these hypnotic BM releases from Trondheim to challenge everything you thought you knew about music.

Celestial Bloodshed‘s Steingrim Torson Brissach, a.k.a. “Mehimoloth,” was one of BM’s greatest talents. The 25-year-old was tragically killed in 2009 when a gunshot accidentally went off. At the time, Steingrim was hanging out in the apartment of his 20-year-old “best friend.” The prolific genius took part in a great number of projects, including many of the bands mentioned throughout this article. (You’ll also find this is the case with musicians like Celestial Bloodshed’s Luctus/Wraath and live member Azazil/Kvitrim.)

Cursed, Scarred and Forever Possessed (2008) was the first of two incredible albums by Celestial Bloodshed. On the cover of this wicked “Gospel of Hate,” you’ll notice that Steingrim looks like the resurrection of Mayhem’s late Per Yngve Ohlin, or “Dead,” who, despite his enormous influence, was totally unlike his contemporaries. Darkthrone’s Nocturno Culto recalls that after his bandmate Zephyrous saw trend-following fakes wearing corpsepaint in broad daylight in 1993, the band stopped. Yet, Steingrim was able to rock what others had ruined because he was so authentic. Steingrim truly imbued black metal with new meaning.

This respected band was founded in 2003 and have dubbed their music “Nidrosian Black Sorcerous Art.” Mare brought you “Nidrosian Moon Sabbat” on the EP Spheres like Death (2010). Yet, Mare waited until 2018 to unveil their debut album, Ebony Tower. Guitarist Nosophoros told Bardo Methodology: “Releasing a full-length album was never our original intention – but as the material gradually took on more of its own identity…” This black liturgy will appeal to your subconscious. It is a bit like beholding a Georges de La Tour painting in all of its clandestine spiritual splendor and mastery of chiaroscuro. Nosophoros explained that early Mare did not have contact with bands elsewhere in Norway. Nidaros may not have been a hotspot in the ’90s; but for that very reason, it survived the flaming wrath and peer pressure of that great and infamous decade:

“At the formation of Mare, our fires were fueled by the strong desire to create something different than the awkward ‘black metal’ coming out of this country in the late ’90s to early 2000s.”

“I built great towers of chaos in the shelter of closed eyelids.”

For 12 years, One Tail, One Head supplied you with seriously invigorating doses of youthful attitude. Their first and final album — Worlds Open, Worlds Collide — begins with the sassily titled instrumental “Certainly Not” and showcases the popular single “Firebirds.” Although Worlds Open, Worlds Collide plays with paradoxes, carries on a certain sort of intellectual tradition, and feels quite mystical, it is also tons of fun. You can call it a bit retro; You might say it has a black n’ roll feel. In any case, this adrenaline-booster is an anomaly by BM standards. Although the album is dark, it’s not at all what you would call “evil.” Outside of this record, one of our favorite songs by One Tail, One Head is “The Splendour of the Trident Tyger” from Demo II (2008) and later Tandava (2011).

Formed in 2005, Aptorian Demon has only put out two songs plus the unforgettable album that is Libertus. You just have to listen to a few minutes of this well-produced oddity to become hooked. Ghash / Storhetsvanviddets Mester delivers some of the most unique vocals. Complete with wolves’ howls, the flamboyant Libertus is one of the most refreshing and distinctive obscure BM releases. In a world of clone bands, this rare gem manages to stand apart. It simply does not sound like any other release.

Whoredom Rife’s third album, Winds of Wrath, certainly caused a storm last year, the waves of which still have not died down. Winds of Wrath is a wicked, crowd-pleasing triumph. The blasphemous cover was illustrated by the Berlin-born, Peru-based artist José Gabriel Alegría Sabogal, whom WR met while on tour. Whoredom Rife may be a duo in the studio, but they perform live with other top musicians added to their lineup.

Rituell Katarsis was followed by Kaosritual’s sole album, Svøpt morgenrød (2007). Both phenomenal releases feature Azazil, Steingrim, and H. Tvedt. Each member of this trio truly shone in unison. The cold, black magical atmosphere of Rituell Katarsis makes this demo one of our favorites. We love the pacing, groove, and perfectly savage rubber chicken vocals. This orgasmic four-song demo brings you “Pest”/”Plague,” “Sykdom”/”Sickness,” “Ild”/”Fire,” and “Død”/”Death.”

Slagmaur is actually from Brekstad and Trondeim. Skrekk lich kunstler marked Slagmaur’s first of three full-length albums to date. This theatrical debut record boasts one of the best covers we’ve ever seen. This pick may not seem so “accessible” to ears that aren’t accustomed to hearing “true” BM, but those who are more advanced have called this record a “masterpiece.” The icing on this maggot-infested opera cake is that Steingrim appears as an additional vocalist.

If you want to hear what a 10/10 sounds like, here you have it! Den Svarte Tid was Selvhat’s debut demo. Selvhat, which means “Self-Hate,” was the lo-fi, depressive solo project of Steingrim Torson. Gjennom mørket famlende (2008) was Selvhat’s only studio album. A compilation called Avskjed was released this year. We are stoked to read Josh Brown’s new book, Ancient Black Art: Nidrosian Black Metal, which began as a tribute to the magnificent Mr. Torson.

This classic Norwegian band is definitely the most important on our list. Like our next pick, Thorns was a true pioneer and belongs to a different category than our other choices. Snorre Ruch is clearly one of the greatest men in metal. As such, he deserves infinitely more respect! Snorre and Euronymous — who actually spent some time in Trondheim as a child, where he befriended Snorre’s playmates — are both credited with creating the black metal style of riffing. Thorns spent some time in Oslo, where Snorre played with- and gave riffs to Mayhem.

Snorre co-founded Thorns as Stigma Diabolicum in 1989. The hugely influential Grymyrk was Thorns’ first demo under their current name. It only features Snorre and Harald Eilertsen. The demo spread across Norway like the plague after it was sent to members Faust in Lillehammer and Marius Vold in Oslo. Thorns’ next demo, Trøndertun (1992), would showcase the classic song “Ærie Descent.”

Manes first came into being as Perifa and then functioned as Obscuro before taking their present name in 1993. Manes is considered a DBSM pioneer for their early work. You can’t beat the necro creator’s Geist of the early ’90s. This is why we’ve selected Maanens natt — the first demo that this outfit recorded as Manes. This savage 17-minute cassette and Manes’ debut album, Under ein blodraud maane (1999), on which you will find updated versions of three of the same tracks and more, constitute two especially important moments in the history of black metal. Between the two efforts released a couple more primitive and arcane demos. During this whole era, Manes functioned as a duo, featuring vocalist Sargatanas as well as multi-instrumentalist and founder, Cernunnus.

It would be criminal if we neglected to mention that Manes shifted in a totally outrageous, experimental direction for their sophomore album, Vilosophe (2003). Manes fuses electronica, jazz, trip hop, and yet still retains a blackish spirit. All the same, Manes would record the savage 15+-minute track “Solve et Coagula” in 2008 with one of their most successful fans, Shining‘s Niklas Kvarforth, and ex-Xasthur‘s Malefic on vocals. The song was included on a compilation album and a 2009 split with a short-lived Askim-based project that was also called Manes (RIP), which was fronted by Dødheimsgard’s Vicotnik before he relocated to Oslo. (Coincidentally, Vicotnik is one of the only artists who is comparable to Cernunnus in terms of his versatility and constant avant-garde exploration.) Trondheim’s Manes broke up in 2011 and was soon resurrected as Manii, a band with the soul of early Manes. Manii marked the reunion of the previously long-gone Sargatanas with Cernunnus. Manes returned parallel to Manii in 2013. We have a special soft spot for Manes’ latest album, Slow Motion Death Sequence (2018).

Some other bands from Trondheim that are worth knowing include Sarath, Black Majesty, Misotheist, Dark Sonority, Castrum Doloris, Grenjar, Unbeing, Saligia, Enevelde, Syning, Beyond Man, Min Kniv, and Bloodthorn (who became DM).

BM ist für alle da?! Trondheim even spawned the Eurovision competitor Keep of Kalessin, which Darkthrone’s Fenriz has referred to as “crap.” However, Fenriz, a.k.a. the self-proclaimed “music police,” has professed his love for Trondheim’s Faustcoven.

The “Black Psych Tormentor” of a madman known as Woe J. Reaper has blessed us with incredibly quirky, unorthodox work. He eventually rechristened his eponymous solo project “Furze.”

We love both Vemod — formed in Nasmos, which is located within the county of Trøndelag that envelops Trondheim — and Vemod — from Trondheim itself — who made one awesome demo.

Also from the greater Trøndelag region, check out Tragediens Trone.

Kvesta and the disbanded “Gorelords” known as Wurdulak, which featured one of the most insane lineups of all time, are/were outfits split between Oslo and Trondheim that kick some serious ass.

How many of these brilliant groups do you remember?

You won’t survive the “Storm of Evil” that these bands are about to unleash!

Metal Sucks Greatest Hits
660 -
KNEEL BEFORE THE POWER OF ELEPHANTS MARCHING RIFFS
0 -
So As it Turns Out, Banging Your Head a Bunch Can Be Bad for Your Brain
0 -
I Am The Working Class: The MetalSucks Interview with Fenriz
0 -
This Very Fat Cat is The Best at Metal Drums
820 -
Rigged: Dream Theater’s Mike Mangini Takes You Through Every Piece of His Mega-Drumkit [Part 1]
1730 -
Leyla Ford’s Eleven Cardinal Rules of Attending a Concert