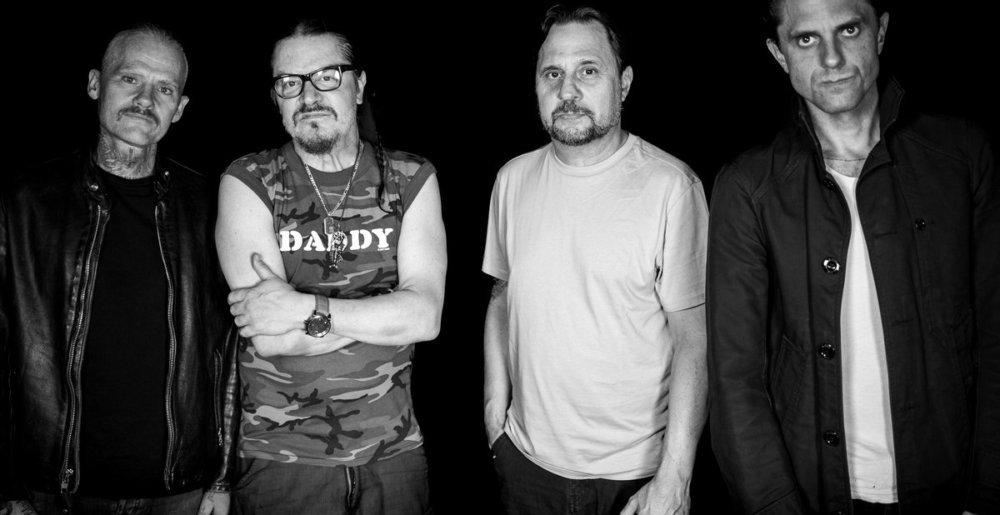 There remain only a few days before the frenetic insanity of Dead Cross returns to smack us across the face with the release of their sophomore album II. So far, we’ve already gotten a taste with the past two singles “Reign of Error” and “Heart Reformer,” but this third and final single – “Christian Missile Crisis” is yet another banger.

If we’ve described the first single as “canned madness in a 105 second package” and the second one was “a comparatively slow burn at nearly four minutes,” “Christian Missile Crisis” marries the two into a frantic track that holds you down for five minutes and demands your attention. Featuring the same cutting guitar work and pounding rhythms, the song moves at a pretty steady clip before slowing things down to a more methodical and menacing pace. According to Justin Pearson, the song’s specifically aimed at certain groups of people.

“’Christian Missile Crisis’ takes an obvious jab at organized religion, NRA-holes who clearly compensate for their lack of masculinity by fixating on gun ownership and gun ‘rights,’ and the fact that a large enough amount of Americans have the inability to negotiate peace and prefer oppressing others.”

It’s been a long enough wait for this new record to come out. Everything we’ve heard so far from the frantic hardcore punk/thrashy supergroup featuring Mike Patton (Faith No More, Mr. Bungle), Dave Lombardo (ex-Slayer, Suicidal Tendencies), Justin Pearson (The Locust), and Mike Crain (Retox) has sounded awesome and unique.

In addition to the new track, Dead Cross has launched an online auction in partnership with Fender, to benefit the American Foundation for Suicide Prevention (San Diego chapter) and The Satanic Temple’s Religious Reproductive Rights Campaign. Located online, the fundraiser has two custom Fender Player Lead III guitars up for grabs – one in black and one in beige, though both have also been modified by The Black Moon Design with clear vehicle wrap grade vinyl decals featuring art from the band’s album.

According to the band, the fundraiser’s mission hits close to their home, after the loss of their ex-bandmate Gabe Serbian.

“In light of the recent loss of our ex-bandmate, comrade, brother, and all around amazing person Gabe Serbian, Ipecac Recordings and Three One G will donate all proceeds from the beige guitar to help suicide prevention awareness. All proceeds from the black guitar will go to help fight laws that do not promote the health and safety of individuals in relation to bodily autonomy.”

Dead Cross’ II is coming out on October 28 via Ipecac Recordings and is available for preorder today.