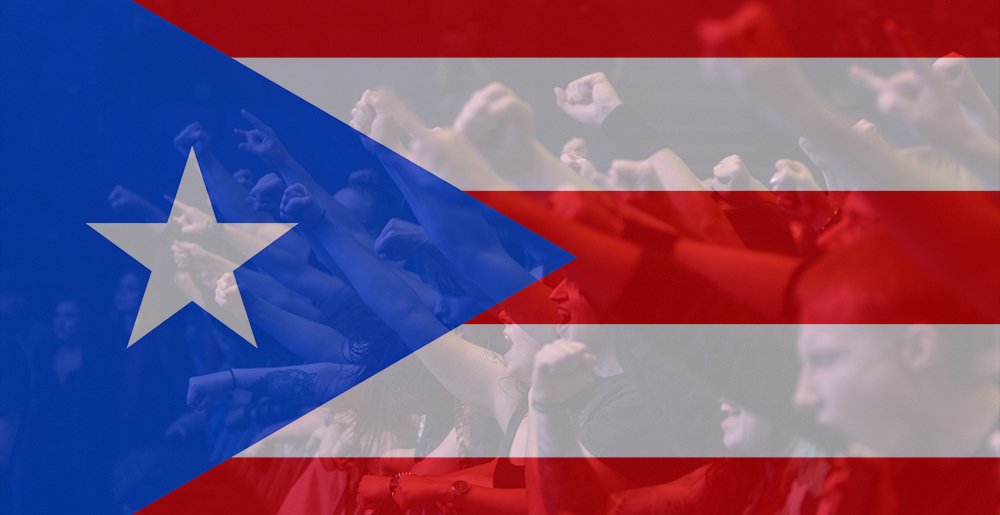 International Mosh: Puerto Rico is Rich in the Metal Scene

As Florida deals with the terrifying force of Hurricane Ian, it’s easy to forget that the storm’s path of destruction hit another U.S. territory – Puerto Rico. The small island territory is constantly forgotten by the mainland and had yet to fully recover from Hurricane Fiona when then Tropical Storm Ian came barrelling through.

While this sort of news isn’t something a heavy metal website like ours would usually cover, it’s important to recognize the lives impacted and lost by the storm. Many of which are metalheads and members of bands on the tiny island. And all that’s not even considering the Puerto Rican disapora living on the mainland, which totals more than four million people, according to the 2010 U.S. Census.

If you want to get an idea of the metal scene in Puerto Rico, the 2015 documentary The Distorted Island: Heavy Metal Music and Community in Puerto Rico is a good starting point. From Cardinal Sin to Puya and beyond, it features interviews with many of the major players.

From the roots to the Flor de Maga’s flower, here are 20 metal bands from Puerto Rico.

Cardinal Sin were the first, being the first metal band in Puerto Rico, emerging in 1984. The band had dreams of being the next Metallica or Sepultura, though even with having the chops (though perhaps not the production value of these bands), after being frustrated with the lack of progress the band was having in Puerto Rico, Cardinal Sin moved to Boston to try their luck in the local scene. After moving back to Puerto Rico, they disbanded, setting a road map for Puerto Rican bands to look towards.

Spanish for sharp point, Puya were the first Puerto Rican band to reach at least a moderate level of success outside of the country, being on the playlists of at least 1/30 Ozzfest attendees in the late ‘90s. Tellingly, the success only came after the band moved to Florida, though their plate of salsa-covered metal was too tasty to be ignored – gaining the band a slot on Ozzfest ‘99 and tracks on major soundtracks at the time. Nowadays, the band has slowed down on their musical output, though do play “special shows” such as the Stereo Music Fest in Puerto Rico.

In 1991, Organic (previously Organic Infest) basically started death metal in Puerto Rico with their demo Drown in Blood getting played alongside Obituary and Napalm Death on the local stations. The three-piece, with their crafty song writing and extreme work ethic are still going strong to this day. “We have survived through pure will. We’ll stop the day one of us dies. That’s the only thing that can bring it to a halt” says bassist Jose Correa in The Distorted Island.

Zafakon are another of the bands featured in The Distorted Island, with the song “Summoning the Vortex” heard in the film. This thrashing death metal band have been at it since 2010, with their first LP, War as a Drug put out in 2013. The video for the track “Fall” from the album features an extremely enthusiastic hometown crowd showing the band and anyone who watches it how hard Puerto Ricans can throw down.

From the town of Quebradillas located on the Northwestern shore of the island, come a nemesis with the stench of decay. Starting in 2000 playing crusty thrash, the band evolved in a harsher direction, playing death metal by the time their Death’s Creation demo was released in 2003. In 2021, they released Some Things Should Stay Underground, and the video for the song “They Live in the Attic” is a stylish, ultra-gory tale of horror which could rival Cannibal Corpse videos.

More death metal from the Caribbean. Severe Mutilation hail from Bayamón, which features a science-themed park (Parque de las Ciencias), a city hall built over a major highway, and of course, a small but devoted death metal community. The band, like a few others featured here are also heard on The Distorted Island: Heavy Metal Music and Community in Puerto Rico documentary. Lately, their output has been a bit halted, though their 2013 album Spawn of Hated is a firm, anti-religious statement backed by some vicious tracks.

Representing the small but savage brutal death metal scene, Blood Rapture have been slamming since 2010. With two full-length albums to their name so far, along with a few live albums and singles, the band has certainly made an impact. Thus, Blood Rapture, as well as fellow bands Massive Destruktion and Marrano all appear on Metal BBQ: The Fall Madness, a split video highlighting some of the best bands from the local scene.

Dantesco are an epic doom metal band with uniquely operatic vocals. The band, whom emerged in 2003, could be compared to Candlemass, Mercyful Fate, Black Sabbath and so on, though they have their own regional touch on the style. Vocalist Erico Morales dons a priest outfit to represent his disdain for them, saying they are the worst criminals in history. Unfortunately, in 2021 Morales passed on, and the status of the band as of this writing remains unclear. Still, they have forged quite a strong legacy so far, and even if they did not continue, their current output is enough to consider them legends of Puerto Rican metal.

If there were ever a band from Puerto Rico who had the potential to break out, though sadly did not due to the death of one of its members, that band would be Death Arrangement. Though only a band from ‪2008-2012‬, this female fronted band had a voice for the voiceless sound to it, with Damaris Negrón penning introspective lyrics accompanied by a voice that, like Medusa’s gaze, could turn you to stone. She unfortunately passed away in 2012, just a year after their full length, The Ultimate Act of Retaliation, was released.

There is something so pure about listening to old school thrash bands with modern production. Damaged are a four-piece band from Guayama who are from that early era of thrash artists in Puerto Rico (1991 – better late than never) whom came back with a vengeance in 2015 and have since released two war-themed albums full of machine gun riffs and lyrics about war history and the battle scars that come along with it.

In a shipping crate and old dirty tire-filled junk yard, the band Calamity perform the song “Guerreros” in front of some heavily armed spectators. Soon the smoke bombs go off and night falls upon the yard as the thrashing riffs turn into a tuneful solo and images of Puerto Rican sports victories replace band footage. It seems a little too patriotic, though it has worked in their favor as the video is currently one of the most viewed Puerto Rican metal clips on YouTube. Hey, the song isn’t bad either – being taken from the album Kairos, the second full-length from this early Metallica sounding group of thrashers.

Fullminator are one of the most vibrantly colored bands I’ve come across – they take the neon aspects of thrash and combine them with a comic book/sci fi theme with an emphasis on evil robots – powered by the energy of thrash. Starting with 2015’s From the Future, each release has followed the all-out robots from space assault, with their latest being the 2021 single Cyberpathic. For fans of Municipal Waste, Suicidal Tendencies, Toxic Holocaust, and other neon-drenched thrash acts from all eras.

“Compare this music to cocaine. Musical cocaine. Everybody loves it; nobody admits it.” Well, alright then *snort*. Bath Salt Zombies are a coked-out onslaught of rebellious ideas put into musical form. “Pick up the brick. Go break and steal” they command in “Pick Up the Brick” while in “Nuke” they make reference to the street drug in Robocop 2. Bath Salt Zombies – listen in moderation. You don’t want a bleeding ear the next morning.

Bestial, non-biblical blackened death/thrash metal from the sunny island of Puerto Rico. Sepulchral came into being in 1999, with the band releasing the Enemy of the Cross EP in 2005. The matter-of-fact, instant classic of a title Fuck Your God Worship Satan was then released in 2008 – and with this song, they solidified their place in the annals of Puerto Rican black metal history. A live album was released in 2013 though things have been quiet since… We await the next appearance of the bestial Sepulchral.

In the early metal days of Puerto Rico, bands would play in places of worship in order to build communities and acceptance. Black metal bands like Humanist, on the other hand, went their own way – existing on their own terms, booking their own shows and in a live setting, took a more extreme approach – being covered in blood and having dead animal bones at their feet. “Humanist represents the dark side of humans. No religion. No divinity. Man is above all false” said the band in The Distorted Island. In 2020, Humanist disbanded, with a message from the band saying “To the few that at some point supported our effort, we thank you for joining us in our brief, intense journey into Hedonism. Those who did not, we certainly hope to have made you uncomfortable in your own miserable skin…Until never.”

Argyle have one of the more innovative logos in black metal – having their name concealed within the illustration of a bat spreading its wings. Active since 2013, they follow the trend of some Puerto Rican musicians in their choice to use music to renounce religion. Their latest release is 2021’s Nuestra Herencia, a harsh storm over a Caribbean paradise highlighting the fallacies of humanity.

The solo musician Lord Asaradel has been a force in the Puerto Rican scene, previously playing in bands such as Sepulchral, Lethal Prayer, Inner Hate and Vampiric Dominion. The black metal project Godless has been a dark cloud festering above Sabana Grande since 1989. With Godless, the dark lord focuses on utmost blasphemy, with albums like Church Arsonist and his latest, Lustcifer. Live, the lord builds an ensemble to play his dark psalms.

Mauling Warmachine is labeled grindcore and death metal wherever you can find their music, however when listening to their full-length, Oblivion Lost, it seems to have more in common with cavernous black metal records than beefy death metal ones. The band members also follow feature black metal-inspired names – Anton Crowley, Nordic Frost and Azrael Azreal. Still, Mauling Warmachine is an anti-social, anti-tuneful congregation of aural venom from San Juan.

“She’s an evil witch. And you will be her bitch” so say the lyrics to A Million Souls’ “Evil Witch.” The mechanical, Rammstein-esque riffing that accompanies the witchy lyrics is honestly a breath of fresh air among all the death and thrash metal coming out of Puerto Rico. Songs like “Vulture’s Prey” continue the band’s trend of discernible, clean sounding vocals and focused riffing. Check out their album Rise like one of the other million souls who have.

The blue aura, or aura azul, represents truth and honesty. Aura Azul started in 1993 as Prowler Wraith and maintain that classic, untainted ‘80s heavy metal sound, even with the change in name and rebirth of the band in 2003. Think Iron Maiden, Helloween and Judas Priest here (the band even opened for Iron Maiden in 2021 for their Final Frontier tour date in San Juan).

The progressive stoner-death band give us some metalhead insights into the history of their homeland.