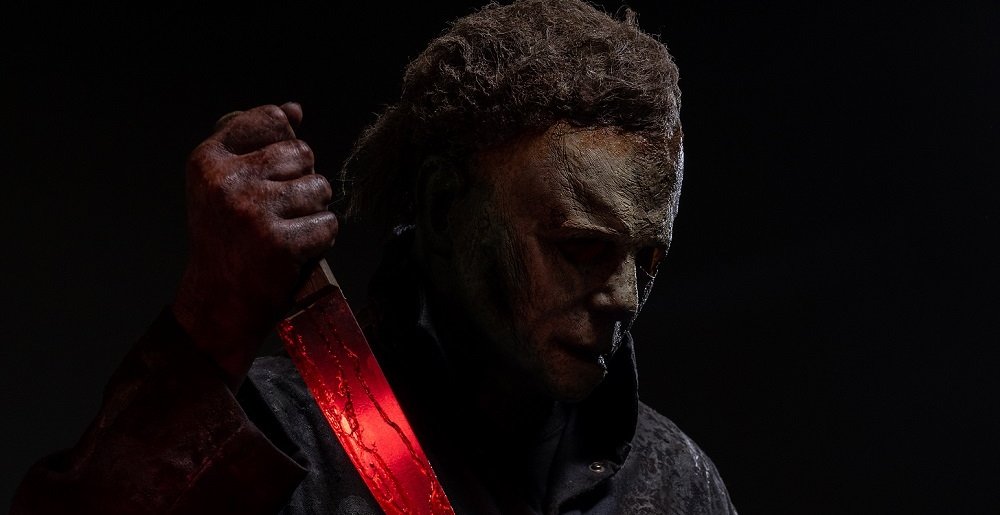 The night he comes home, he’s going to need some tunes.

Music is one of the main ingredients to Halloween‘s success. The simple, yet eerie and undeniably catchy theme composed by John Carpenter was a stroke of genius, and has been as much of a constant in the film series as Michael Myers himself. Aside from Carpenter’s score, though, other songs have become immortalized in Halloween films and numerous artists have used The Shape and the events in Haddonfield as inspiration for their own songs.

If you wanted something played right, you’d better play it yourself. Since John Carpenter composed the simplistic, yet immortal Halloween theme in 1978, kids have been playing it in learning the piano instead of “Chopsticks.” With his backing band in his corner, Carpenter injects some growth hormones into his home-grown pumpkin, giving it a live makeover, which perfectly suits the synth-rock style of his current string of albums.

Trent Reznor was probably one of those kids playing Carpenter’s Halloween theme during his after school piano lessons (he was 13 in 1978, after all). No stranger to film scores himself, leave it to the Nine Inch Nails mastermind to give tribute to Carpenter – a legend not only in film, but in synth-based music, which was an influence to anyone with a TV and a set of ears in the ‘80s. He and Atticus Ross do the theme justice, presenting a brooding and punchy rendition.

If Trent Reznor was one of those kids practicing the Halloween theme on his piano, Perturbator’s James Kent, being a part of the next generation of synth masters, most likely practiced NIN’s “Something I Can Never Have” as well as the Carpenter classic during his own after school lessons. Perurbator’s take on the theme submerges it in the smog of the ‘80s, making the song feel as if it was a part of the Terminator soundtrack.

The five-piece Russian djent/oriental band Shokran gave their interpretation on Carpenter’s classic in 2020 with “Halloween Kills: Metal.” Shokran’s take on the Halloween theme injects some gnarly riffs into the familiar tinkle (sounding more formidable than the grunged out Halloween: The Curse of Michael Myers rendition). Like Halloween Kills, there is a lot of stabbing here, with the last bit of the song featuring some death growls straight from Myers’ blackened soul.

Jason Richardson of Born of Osiris, Chelsea Grin and All That Remains fame shows his chops and slashes in his rendition of the familiar theme. Under the Ernie Ball banner (of which he is a sponsored artist) he, in the video suits up in a mechanics outfits and sports Myers’ mask before unleashing some progressive noodling over a rising Halloween theme. The end result is something akin to Buckethead playing the Halloween theme – an interesting take on how it can be built upon and manipulated to breathe new life into a well-known classic.

All of the metal-oriented Halloween theme covers listed so far have been great in their own way, though Orbit Culture’s theme perfectly synchronizes chugging guitar riffs and aggressive drumming with that familiar jingle, making it a high point of metal covers (so far). The build-up to an all-out crescendo during the song’s finale gives justice to the high-drama that is often associated with the series.

Arguably the most famous jungle aside from the main Halloween theme is the Silver Shamrock theme from Halloween 3: Season of the Witch. You’d think there would be more cover versions of this song – though perhaps just this one is enough. Black metal musician Tjolgtjar presents a harsher sounding version than the original, though it doesn’t lose any of its charm in the process.

Since the day he emerged onto the scene in Frankenstein Drag Queens from Planet 13, Wednesday 13 has sought to be synonymous with all things horror. The musician composes songs about, and usually does justice to, a plethora of films, and Halloween is no exception – being the basis to one of his catchiest tracks. In fact, Wednesday’s “Haddonfield” is to Halloween what Alice Cooper’s “He’s Back (The Man Behind the Mask)” is to Friday the 13th. If they only used the song in an official film, it would be that much more renowned. Instead, like Halloween 3, it remains a cult classic.

Ice Nine Kills – “A Stabbing in the Dark”

Each generation has their handful of horror-inspired bands who revisit your favorite classic films in song. Ice Nine Kills are this generation’s band, and in their sleeping bag of horror-themed metal musical numbers, Halloween is represented with “Stabbing in the Dark.” The song first takes the Dr. Loomis approach, focusing on Myers’ time in the psych ward, with the famous line “He has the devil’s eyes” giving way to the slaughter that follows. The band also include a few seconds of “Mr. Sandman” to show that yes, they’ve also seen the sequel.

“Hide the knives after you eat. Because Michael Myers is coming. Trick-or-Treat!” The Meteors were doing Halloween related songs long before it was considered somewhat normal to do so. Released in 1984, the English psychobilly band’s “Michael Myers” tells the lore of the first two Halloween films and even attempts to get into the dark thoughts of Myers. What is driving him? “He’s got girlies in his mind. Scarred fingers and a rageous brain.”

Horror punk group Blitzkid, on their 2001 album Let Flowers Die, pay tribute to horror classics like Hellraiser, Candyman, Motel Hell and The Fog. Track 11 on the disc is “Myers 10/31,” a mid-tempo banger which again tries to get into Myers’ psyche with the lyrics “The kids all think that it’s pretty neat. I’m a ghoul, I’m a killer and I’m a fiend, And I just love to make them scream. Whiteface mask and a butcher knife.” The ending breakdown with the lyric “Life is fragile in my eyes. I’m coming home tonight” gives way to one last “Miiichaaaael” which couldn’t have sounded better if it came out of Donald Pleasence’s screaming mouth himself.

Swedish thrash band F.K.Ü. (Freddy Krueger’s Ünderwear) have a few songs about those bloody Halloween nights in Haddonfield. “Michael Myers Costume Party” paints a scenerio in which Myers himself throws a party and even though the food is great, the drinks are strong, and F.K.Ü. is playing on the stereo, he’s going to kill everyone anyway. “Michael Myers, TRICK OR TREAT! At his party there’s a lot to eat. Michael Myers, TRICK OR TREAT! At his house there’s a lot of meat.” Hey, a Shapes gotta eat. Their other Halloween related track is “Halloween II.” There is no party in this track, but it’s still time to die.

Part 3 – Songs Featured on Halloween Soundtracks or in Halloween Films

“Don’t Fear the Reaper” is an ominous song in any situation. In Halloween, though, the song takes on a more sinister tone as it plays on the car radio as Laurie and Annie smoke a joint and drive along. Unbeknownst to them, the reaper himself, Michael Myers, is trailing close behind. The song also has ties to other horror films such as The Stand, in which the song makes an appearance during the opening credits, and X, where it was played on a radio as well. For more Halloween ties, it was also used in Rob Zombie’s remake.

Brother Cane – “And Fools Shine On”

Halloween: The Curse of Michael Myers is a film you either have some nostalgia for or hate. For me, I have fond memories of it since it was the first Halloween I saw in the cinema (the hype for who was the Man in Black was legit at the time). The film is a product of the times, with lots of quick cuts, ‘90s hairstyles and guitar getting worked into the theme song. The soundtrack also features this song by Brother Cane, an alternative rock band whom released three albums during the decade. Like a lot of post-grunge songs released around that time, it is both unremarkable but catchy enough to get stuck in your head. Dare I say you might be humming it after the credits instead of the classic theme song.

Creed – “What’s This Life For”

The post-Scream horror scene – every movie now contained hip teens, self-parodying quips and of course music which would appeal to a newer, younger crowd. Enter Halloween: H20 and its musical representation of late ‘90s teen slashers, Creed. Times didn’t change so much actually, as post-grunge carried over from the previous Halloween, with this Creed track being like Brother Cane’s lost sibling. Creed also found their way into the Scream 3 soundtrack, so once we do a Ghostface playlist, expect to get Scott Stapped again.

Rob Zombie’s H2 remains, aside from Halloween 3, the black sheep (or is that black horse) of the series. While some praised his original vision after a mostly rehashed remake, the majority of Halloween fans found a lot to dislike in the film. Whether you dig the film or not, it does offer some interesting additions to the lore, such as a Weird Al cameo and during a party, songs from fictional band Captain Clegg and the Night Creatures (Clegg being country singer Jesse Dayton). “Transylvania Terror Train” does bring to mind the ‘80s slasher Terror Train, though in this film, hobo Myers is the conductor.

Ghost joins the distinguished groups of artists who were able to have their song featured during the credits of a Halloween film. Halloween Kills introduced the public to “Hunter’s Moon,” a song which could be interpreted as being about Myers and his tendency to “strike again” under the aforementioned moon. People have always compared Ghost to Blue Oyster Cult, whose “Don’t Fear the Reaper” was a highlight in the original Halloween, so their inclusion is most fitting.

Metal Sucks Greatest Hits
1570 -
Frankie Palmeri’s Track By Track Breakdown of the New Emmure Album: A Track By Track Breakdown
690 -
Let’s Argue About Iron Maiden Album Art
220 -
Hey Guys, Did You Know That Virgin Steele are From Long Island?
820 -
Rigged: Dream Theater’s Mike Mangini Takes You Through Every Piece of His Mega-Drumkit [Part 1]
0 -
Review: Megadeth’s Super Collider is a Super Catastrophe
0 -
Video Footage of Emmure’s Frankie Palmeri Getting Electrocuted On Stage in Russia