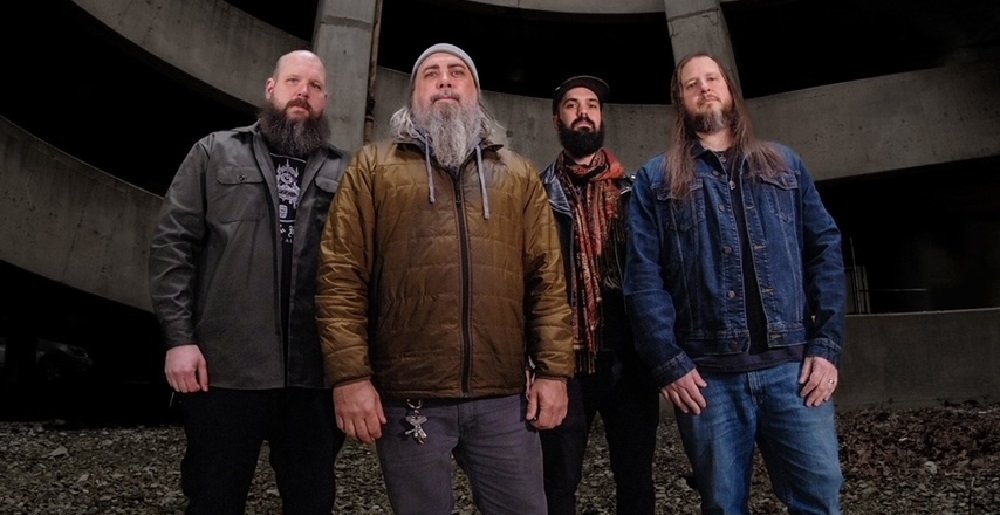 If you’re looking for a fun, trippy, catchy band to sink your teeth into and get you through the rest of your week, we present to you: Rattlesnake Venom Trip. And while a name like that could illicit some sort of neck pain and headache inducing thrash outfit, this Ohio-based band touches on a wide range of musical influences and genre affinities to create something really engaging.

Seriously, as the album moves on, you can practically hear their love letter to rock and metal’s biggest icons. There’s a little bit of Black Sabbath in there, mixed with some Alice in Chains, and peppered generously with both Queens of the Stone Age and Mastodon. And what you get is a melding of musical dynamics that establishes a landscape for the listener to just take in. Rattlesnake Venom Trip are here for a good time and each track on Dead Empire is a different road to get there.

The fact that this album sounds so eclectic makes sense, since its band members each have a long history of playing in bands and releasing music over the years, including the metalcore act Twelve Tribes, post-metal outfit Mouth of the Architect, and stoner rock band Neon Warship.

Released today, Dead Empire is available wherever you buy new music, the band’s Bandcamp page, and on all major streaming services. And without further ado, we suggest you sit back, buckle up, and get ready for Rattlesnake Venom Trip.

This song sets the tone for the entire album. It’s also the first song we wrote as a band. It’s our unrelenting, open the flood gates and drive the melody in your head thrash song. Pulling from our old-school metal roots with a “simple is better” approach. Kevin [Schindel] adds, “I found my voice with this song. I had a different style in my previous band, Neon Warship.” Lyrically this song is about reflecting back and realizing you’ve lived a pretty unexciting life… wishing you could have done more.

“Cause You Know” starts off with a malicious riff with an agenda. It’s thematic and won’t leave you alone, even in the chorus it subtly weaves its way through like a bad thought. We approached this with intentions of writing a heavy hitting stoner/sludgy rock song but accidentally stumbled upon something with pop sensibilities. Don’t worry, there plenty of doom and gloom midway through even touching on our psychedelic influences. Lyrically it’s about living with your demons and finally accepting them, even embracing them. Featuring Adam Dutkiewicz on lead guitar.

“Vicious Cycle” is a semi truck barreling across the Great Plains at 100 mph. With driving riffs à la Black Sabbath’s “Paranoid” until said truck crashes into a 90’s grungy/sludgy outro that beautifully trudges along longer than the first part of the song. Climaxing with a sonically pleasing Gilmour-ish guitar solo to show you “it’s” there but the cycle has prevented you from ever obtaining it.

“Hypnotic State” is a moment of clarity in all the uncertainty. A deep breath. Grieving for something before it has even ended. This song channels our grunge influences comprehensively once again with our own flair of psychedelia and impenetrable layers of harmony. The verses are held together by Matt [Tackett’s] mesmerizing bass while the vocals seem to be trying to tell us something through some unknown medium. Evan [Davell] adds, “I was inspired how sonically dense Hum’s ‘Inlet’ was and decided to write something in that vein.” Kevin adds, “the chorus took some time to figure out but the labor was worth it.” The final riff grows layers as the pendulum swings the listener into hypnosis.

Favorite lyric:
It’s your stage
Speak your words
Can they hear?
Or are they gone?
Everyone’s glossy eyed

A lashing out at reality. Fast paced guitar riffage that mirrors the struggle of being pushed to your absolute limits. Hearkening back to our favorite 80’s thrash titans. A Randy Rhoads influenced guitar solo on top of pummeling double bass drum. Riffing and thrashing nonstop until the song comes to a triumphant chant. Everything you could desire in a thrash song.

A single snare crack and it’s off. Crash cymbals galore on top of a mix between hardcore juxtaposing classic rock. At 90 seconds in, the song abruptly switches gears into a Snapcase-style breakdown that can’t help itself from morphing back into a Zeppelin-esque rock anthem.

“Amongs Their Gods” is about living under someone else’s rule and the helplessness that comes with that. Realizing they’ll never stop using you so eventually you stop caring and fight back. Driving and sinister.

Favorite lyric:
They live amongst the gods
While raining thunder down
Hammers that nail coffins
They think they own you now

We love big intros. We love big guitars. We also love Shane [Shook’s] tectonic tempo shift style of drumming that makes this song what it is. Starting with NWOBHM style verses, leading into “you can’t help yourself but sing along choruses”, and then falling into a slower, theatrical, beautiful weaving of multiple melodies seemingly not competing for space at the central core of the song. Enhanced by the most perfect guitar solo by Kevin. Lyrics paint the existence in the chaos of modern society. The weight of it all is forcing you to do things you don’t want to do. Understanding this, you must do what you need to survive, but can you withstand it?

It’s raining. “The Heavy Pour” has left us here. Now all that’s left to do is wait for the storm to pass. Kevin and Evan locking horns in a dual guitar harmony while Matt reassures us that there’s a solid ground for us still. The song continues into a bluesy verse/chorus/verse/chorus until a larger than life bridge let’s us know the album is coming to an end. “OWE” is about facing impending doom. Trying to save everything, to put the pieces back together, but realizing it’s too late. Your world is just too broken and it’s time to leave. Musically doom meets grunge. A dark song to end all things.

Favorite lyric:
It was a message heard loud and clear
But no one could hear with their bleeding ears
Gather the things that matter the most
And dig a hole so they can have a home

Metal Sucks Greatest Hits
0 -
Deicide’s Glen Benton Sells Out, Tells Fans to Stop Moshing So Violently
0 -
Someone Made a Lemmy Doll from a Mr. Potatohead
2760 -
Who Are The Top Ten Lyricists?
250 -
Worst Year Ever: All of Our 2011 Year-End Sh*t in One Place
0 -
Nazi Imagery: Why Watain and Marduk Don’t Get a Pass While Slayer and Metallica Do
0 -
Ten Reasons Why Record Labels Are Still Important