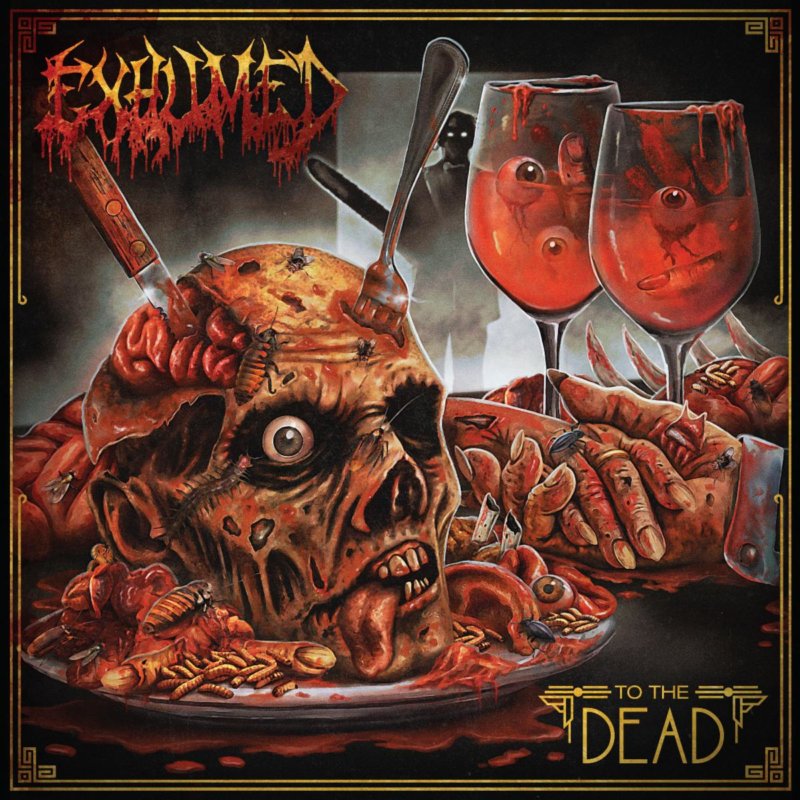 Review: Exhumed’s To the Dead is Another Choice Cut

The last decade has been a fruitful one for extreme metal’s bloodiest band. After reforming in 2010 and releasing 2011’s All Guts, No Glory as their comeback record, Exhumed have kept themselves busy, releasing another five records (plus a couple splits, a live album and an EP) in less than a decade. The latest, To the Dead, is due out October 21 on Relapse Records and continues the band’s bloody legacy in veteran fashion.

Not much has changed in the Exhumed camp since 2019’s Horror. It’s guitarist Sebastian Philips’ second full-length outing with the gore hounds, joining bandleader/vocalist/guitarist Matt Harvey, bassist/vocalist Ross Sewage and drummer Mike Hamilton. The musicianship on To the Dead is tight and the production is nasty without sounding sterilized, an essential when an album’s song titles include “Lurid, Shocking and Vile,” “Nerotica” and “No Headstone Unturned.”

To the Dead is a tribute to the past as well as a look forward for Exhumed. Former members Mike Beams, Leon del Muerte, Matt Widener and Bud Burke were invited to contribute to the writing process, which certainly contributes to the era-traversing scope of the record. The previous members played on a number of Exhumed records from the classic trilogy of Gore Metal, Slaughtercult and Anatomy is Destiny to All Guts, No Glory and even the band’s demos, a fact evident throughout the grinding death metal opus.

The best moment on the first half of To the Dead comes in the form of “Carbonized,” a sub-three-minute ripper that delivers nothing but pounding drums, frantic riffing and a guitar solo that sounds like it might go off the tracks. “Rank and Defiled” has some melodic death metal swagger, recalling Exhumed playing Carcass, and “Lurid, Shocking and Vile” meets somewhere in the middle of the two songs.

“Undertaking the Overkilled” starts off the B-side of the album, which features, for this writer’s money, some of the best songs on To the Dead. “Nerotica” straddles the extremity and the melody that make Exhumed’s sound, as does the excellently-titled “No Headstone Unturned.” The record ends with a pair of bangers, “Defecated” and “Disgusted,” two of the strongest on the record. “Defecated” features some very satisfying staccato riffing and grooving death metal parts, giving way to “Disgusted,” which is just a straight melodic-ish death metal banger.

Exhumed don’t reinvent the wheel on To the Dead and they didn’t need to. By honoring their past and continuing to refine their formula, they’ve hacked and slashed their way into another killer entry in their discography.

Exhumed’s To the Dead will be released worldwide on Friday, October 21 via Relapse.

When the game plan is repackaging ‘80s underground metal and punk with an appreciation of absurdity, Dead Cross isn’t easy to get tired of.

Reviews 0
Review: Avantasia’s A Paranormal Evening With the Moonflower Society is a ‘Who’s-Who’ of Fun
October 19th, 2022 at 11:37am Jakk Mylde

This record sticks to the band’s formula, but it’s still a great time.