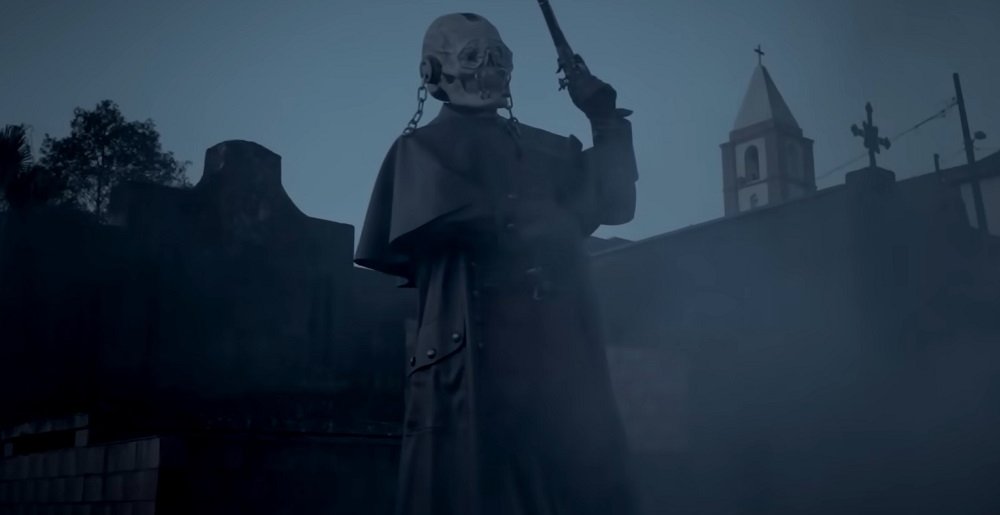 Just when you thought it was safe to be a shitty person in Megadeth‘s Vic Rattlehead Cinematic Universe – or VRCU, as it were – a new music video shows the thrash band’s mascot getting even more revenge on more people doing shitty things. The new video for “Life In Hell,” released by the band earlier today, represents the fourth installment of album’s series of videos.

Now, I know what you’re thinking – “But Hesher, the last Megadeth music video post you wrote said it was the end of a trilogy and trilogy means there are only three!” Yeah, it might be a bit confusing, but this seems like it’s just part four of the album’s set of music videos. Don’t ask me – it’s Vic Rattlehead’s fucking world and we all just live in it, baybee.

This video’s got a whole lot going on in it, with an epic showdown between some robe wearing monks and multiple Vic Rattleheads, quick shots of the band in the darkness, and a goth witchy lady that gets snatched up by a big burly monk and has the camera focus on the pendant between her boobs for some reason.

As for the song itself, it’s pretty kick ass. Realistically, most of The Sick, The Dying …And the Dead! is kick ass, even if I personally feel like Dave Mustaine’s lyrical content has lots its edge over the years. That’s just me though. By this point, you likely already have an opinion on the band, Mustaine, and the album. So feel free to check out the new video below and if you want, you can catch up with the other three parts of the trilogy.

Sponsored Links from Across the Internet
Show Comments
Related Articles
News 0
Chad Kroeger is a Marty Friedman Fan but Thinks His Playing Style is “Tough to Watch”
November 29th, 2022 at 9:53am Hesher Keenan

Metal Sucks Greatest Hits
0 -
Rigged: Luc Lemay of Gorguts
0 -
Thirty of the Worst Metal Band Promo Photos of All Time
0 -
The formula 4 good music: Generic, but with a gimmick (*please read*)
1570 -
Frankie Palmeri’s Track By Track Breakdown of the New Emmure Album: A Track By Track Breakdown
0 -
Watch This 10-Year-Old Girl Shred Through Slayer’s “War Ensemble”
0 -
12 Embarrassing Albums That Everyone Owned Back In The Day