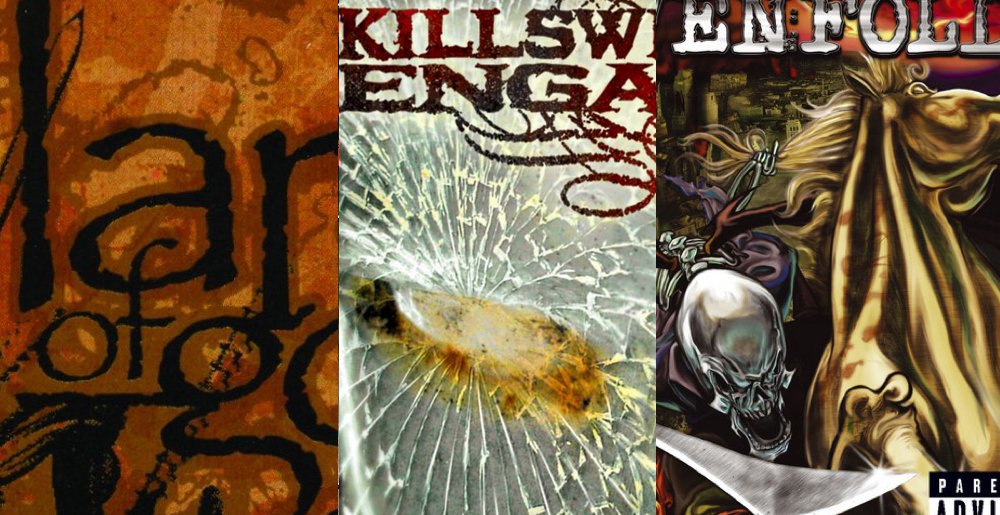 The New Wave of American Heavy Metal was an exciting period in time for, well, American heavy metal. As we emerged from the nü metal-induced fog of the late ’90s and early 2000s, a new crop of metal bands rose up, bearing extreme metal-derived riffs, Pantera and death metal-influenced screams and the melodic sensibilities of classic metal. The bounds of the genre tag are still up for some debate given that the movement ended less than two decades ago, but many—not all—of the bands played a style we recognize today as metalcore and proudly wore the “metal” label as a badge of honor.

The NWOAHM and the bands within have been derided in the years since as not being extreme enough or inspiring the next generation of metalcore, but those same bands also brought the emphasis back to riffs and away from turntables, inspiring new legions of young musicians and bridging the gap between hard rock and extreme metal once again.

Timelines are debatable, but most metal historians and bands who were there agree that the NWOAHM lasted from the early-to-mid 1990s and ended somewhere around 2006. With that in mind, MetalSucks is putting on our metalcore apologist hat and revisiting the best songs of the New Wave of American Heavy Metal.

Massachusetts was a hotbed for metalcore, so it’s no surprise that a number of artists on today’s list hail from the land of America’s least favorite football team. Shadows Fall began to move away from the Gothenburg sound of melodic death metal on The Art of Balance, which made for some interesting choices, including a cover of Pink Floyd’s “Welcome to the Machine.” On “Thoughts Without Words,” Shadows Fall incorporate hard rock influences into their melodic death metal stylings; it’s a very of-its-era song, but one that feels very representative of the time.

Prosthetic Records hit the jackpot a few times around this time period, releasing the first four Lamb of God albums and landing soon-to-be metalcore stalwarts The Acacia Strain. Himsa didn’t replicate that success but they struck gold musically a few times, like on Courting Tragedy & Disaster. Songs like “A Girl in Glass” nail the relationship between melodic metal and hardcore with a production job that’s raw but still heavy as fuck.

Also of note: Himsa’s debut EP came out on legendary hardcore label Revelation Records, further demonstrating the hardcore-metal scene unity developing at that time. They were set to hit the road with Darkest Hour for a European tour earlier this year, but it was canceled due to COVID-19 concerns.

The Curse is the sweet spot between Atreyu‘s musical abilities and their radio rock aspirations. “Bleeding Mascara” features more of an emo influence than anything else on this list, but the face-melting solo that starts the track and the throat-shredding vocals mixed with cleans like that confirms that the song belongs on this list.

12. Bleeding Through – “Love Lost in a Hale of Gunfire”

Southern California was another hotbed for the New Wave of American Heavy Metal, spawning a number of bands, like Bleeding Through. In the early 2000s, Bleeding Through were hailed as a band that would help usher in a new era of metal. While they didn’t have the star power of some of their peers, This Is Love, This is Murderous combined technicality, atmosphere and straight-up heaviness in a way that was different from the pack. After breaking a brief hiatus announced in 2014, Bleeding Through returned to making music in 2018.

Another band hailing from Massachusetts, The Red Chord exploded onto the scene with their debut album, Fused Together in Revolving Doors. They reigned in the off-the-walls fusion of death metal, hardcore and grind on their second album, Clients, which quickly grew to be one of the NWOAHM’s classic albums. The Red Chord recently reunited to play a few shows, including a full performance of Clients, and songs like “Fixation on Plastics” can still make a crowd go wild.

God damn, dudes, God Forbid deserved so much more. The New Jersey outfit released some seriously good albums in the early aughts, their thrashy melodic death metal core and grooves appealing to both hardcore kids and Gothenburg-loving heshers. 2005’s IV: Constitution Of Treason is loaded with riffs and breakdowns, standing as probably one of the last great albums of the NWOAHM. “The End of the World” sums up everything great about God Forbid, who recently reunited to play Blue Ridge Rock Fest 2022.

The Impossibility of Reason (2003)

The members of Chimaira were always clear that the band was descended from the likes of Slayer, Machine Head and In Flames despite their groovier (read: nü) tendencies on their early albums. Propelled by crusher singles like “Power Trip,” Chimaira stuck it out ’til 2014, when they hung it up, except for a 2017 reunion show. Drummer Austin D’Amond joined DevilDriver shortly after Chimaira’s demise.

As previously noted, a big part of what qualified a band as being a part of the New Wave of American Heavy Metal was the pride with which a band wore the metal label. Unearth had plenty of hardcore in their music—particularly in the breakdowns and vocals—but featured melodic sensibilities that clearly came from extreme metal. “Zombie Autopilot” features two guitar solos and a strong emphasis on lead guitars, qualities that Unearth maintain to this day.

On the surface, Hatebreed don’t really fit in with the rest of this list; their early records, Satisfaction is the Death of Desire and Perseverance are straight-up metallic hardcore assbeaters, are made for people wearing camo shoots and Air Force Ones. With The Rise of Brutality came out, Hatebreed continued to feed their metallic side. Songs like “This is Now” and “Live for This” take the stomp of arena metal and mix it with the pit aggression of metallic hardcore.

Also worth noting: Hatebreed are on a lot of the big metal tours of the time. To leave them out of the canon is to ignore a major player in the movement.

Three things in life are certain: death, taxes and Darkest Hour. Nearly 30 years into their career, Darkest Hour are one of metalcore’s most reliable bands. Undoing Ruin is melancholic and songs like “Convalescence” feature an almost post-metal lean to them, really setting them apart as the genre developed an increased focused on being as heavy as possible.

Like Darkest Hour, Trivium have stuck true to their musical roots and continue to write thrashy, melodic metalcore that has earned them spots on tour with the likes of Metallica and Iron Maiden. Ascendancy almost came to the party too late, catching the last real wave of the movement with their sophomore album. There are a lot of Trivium songs that could have qualified for this list, but “Like Light to the Flies” has become a staple for the band, even serving as the one song from Ascendancy on their recent headliner.

“Bat Country” was completely inescapable at the time of its release, for reasons that are very obvious when looking at the rest of this list. Riding the success of 2003’s Waking the Fallen, Avenged Sevenfold switched gears and made a heavy fucking metal album. M. Shadows leveled up as a vocalist and the guitar duo of Synyster Gates and Zacky Vengeance hit their stride in a big way. The jump from Waking the Fallen to City of Evil is huge, but I dare you to find a teenager whose musical trajectory wasn’t changed by songs like “Bat Country” and “Beast and the Harlot.”

“My Curse” is the youngest song on this list, a late entry from a band already deeply entrenched in the scene by the time their fourth album was released. Killswitch Engage were one of the bands that spearheaded the then-unnamed fusion of extreme metal and hardcore but they were never better than the years Howard Jones fronted the band. “My Curse” catapulted Killswitch Engage straight into the mainstream along with a killer metalcore cover of “Holy Diver.”

Atlanta’s finest—Mastodon, not Outkast—put the rest of the scene on notice with their sophomore album, Leviathan. “Blood and Thunder” rips with all the fury of Moby Dick and set a quality bar that would be hard to follow, for the band and for their peers. Leviathan kicked away the last vestiges of nü metal with total confidence.

You already knew who would be number one on this list. Lamb of God had already established themselves as a force to be reckoned with as Burn the Priest, but their debut as Lamb of God, New American Gospel, is a document on how the scene would look from that point on. “Black Label” is a live staple and the perfect modernization of bands like Pantera and Machine Head.