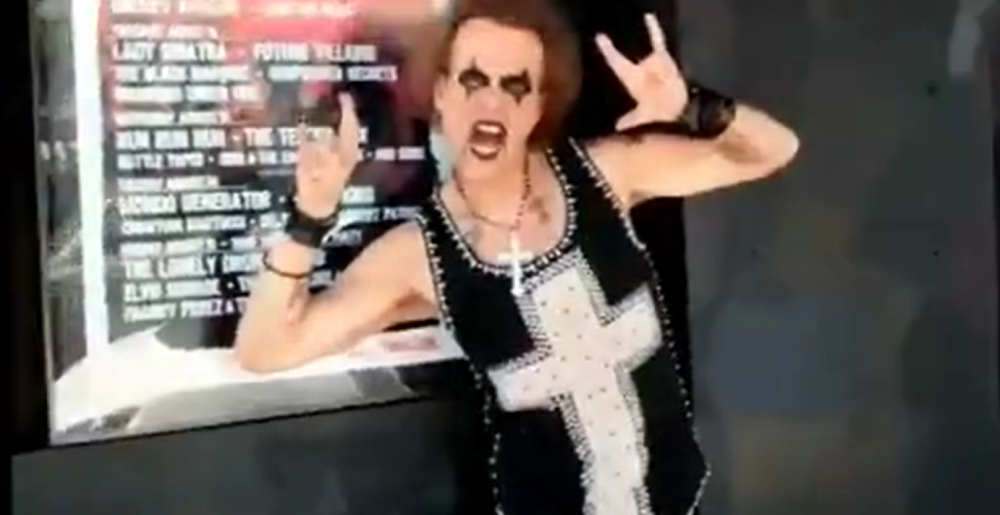 There are some obvious choices for your exercise playlist like Black Sabbath’s “Iron Man,” Judas Priest’s “Running Wild,” and Pantera’s “Walk,” but Immortal and Abbath can give you that glorious feeling of being an invincible god. Similarly, Aria’s «Дух войны» / “The Spirit of the Warrior” is bound to hype you up by appealing to your bloodlust. Remember: When maximizing your pre- and post-run stretches, Velvet Revolver’s “Loving the Alien” and Manes’ “Last Resort” are among the best songs you could possibly play.

It’s time to sweat to the oldies — as well as some newer tracks — like corpsepainted Richard Simmons was in the room! Get down, dirty, and soaking wet with these 12 metal workout songs.

Bullet for My Valentine — “The Last Fight”

Even if you aren’t secure enough with yourself as a headbanger to admit secretly adoring Bullet for My Valentine, you must acknowledge that “The Last Fight” is an awesome song! This track, which hails from Fever (2010), focuses on addiction. Not only will it make you want to kick your bad habits, but it will also make you want to kick some serious ass: “I will fight! One more fight!” This song’s boxing-themed music video is a major home run. Always fresh, “The Last Fight” has the eternal youth and allure of the Adonis-like figure of Dorian Gray that is so necessary when facing the monotony of your routine repetitions.

Darkthrone forever! “Hiking Metal Punks” is a highlight from the crust-influenced album Dark Thrones and Black Flags (2008). Only Fenriz could have written this song’s zany lyrics. He also composed the music. Fenriz is known for his love of nature. He has shared his knowledge about the topic. The black metal icon has written tent-trip guides and contributed to Norway’s largest printed paper, Aftenposten, for example.

Let’s be honest. This song is a major turn on. It’s sexy as hell and will supply you with extra energy to sublimate into your workout. In other words, it will give you the “rush” you need to perform. “Rush” appears on Poisonblack’s sophomore album, Lust Stained Despair (2006). Poisonblack (R.I.P.: 2000-2015) is an old flame that we miss sorely. The band’s founder, vocalist, and lead guitarist, Ville Laihiala, is a true god whose magnificent voice is just about unrivalled.

“Sex on Legs” is a single from Lord of the Lost’s second album, Antagony (2011). This irresistible gem, which extols the glory of quick sexual interactions, has a simple message — “Walk on!” Yes, “Sex on Legs” is sure to get you moving.

This machine-like track is guaranteed to turn you into a loaded gun at the gym. Most importantly, however, Rammstein’s “Bück dich,” or “Bend Over,” will remind you of the thing that matters most in life — having a nice backside: “Das Gesicht interessiert mich nicht” / “The[/your] face interests me not.”

Gorefest’s third album, Erase (1994), is a life-changing record, and its title track is simply the best! Inspiring lyrics can sometimes lead to unintentionally comical results in death metal, but Gorefest does things right. Frontman Jan Chris de Koeijer encourages you to “Be strong…” and unleash your inner madman: “It is not a shame to be called insane. And to go against the grain.” This classic, which challenged death metal conventions, will help you “break down the chains” holding you back from building your biceps.

“Förtvivlan, min arvedel,” or “Despair, My Inheritance,” is a crown jewel from Shining’s VII — Född förlorare (2011), or “VII — Born Loser.” This defiant and varied masterpiece delivers everything you could possibly want. It will rev up your appetite for chaos to make you feel the pain you need in order to gain: “Systematiskt raserar jag allting som någonsin betytt något för mig. Med ett leende maniskt likt en autobahn bred.” or, in English: “I systematically destroy everything that has ever meant something to me. With a maniacal smile wide as the Autobahn.”

Korpiklaani’s “Vodka” may as well have been written about physical fitness: “You’re feeling stronger… No more feeling bad… You are the real man.” Having a great physique “removes your fears.” At the gym, “Everyone is gorgeous.” Once you have attained six-pack abs, you will morph into an absolute beast: “Here comes the womanizer… and you will feel awesome!” This fan favorite won’t fail to bring out your inner berserker. For today’s purposes, we also recommend Korpiklaani’s “Rauta,” or “The Steel.”

The Oslo-based melodic grind band Beaten to Death is one the oddest projects of true value to arise out of Norway. The group boasts one of metal’s coolest drummers, ex-Tsjuder’s Christian Håpnes Svendsen, who currently belongs to blazing outfits like Doedsvangr, The Cumshots, and Grimfist. Beaten to Death’s vocalist, Anders Bakke, is the frontman of the genre-bending veteran act She Said Destroy. “Cat Olympics,” which debuted on Xes and Strokes (2011), is a great way to insert some comic relief into your pursuit of greatness. “On Running” and “Run Burn Move Die” are a couple other songs by Beaten to Death to add to your workout playlist.

Let’s get physical with spandex and our favorite glam powerhouse, Steel Panther! Steel Panther’s members are comic geniuses. “Fat Girl” will definitely encourage you to go the extra mile in a literal sense. It’s really that “heavy.”

There’s nothing more conducive to overall health than casting away illusions and accepting personal responsibility: “Finally forced to face what I’d become.” “My Own Grave” has the ideal type of energy to bring to your fitness endeavors. As I Lay Dying’s frontman, Tim Lambesis, is currently offering his services to help you get into top shape. His coaching page is called Metal Made Muscle.

Regarding another wellness-related matter, Tim is also working to find meaningful employment for former addicts and those who have been incarcerated. In 2020, the “Redefined” singer founded a program called Reintegration through Vantage Point, a preexisting non-profit organization based in San Diego. Obviously, many metal fans do not support Tim, but everyone should be permitted to form a free opinion.