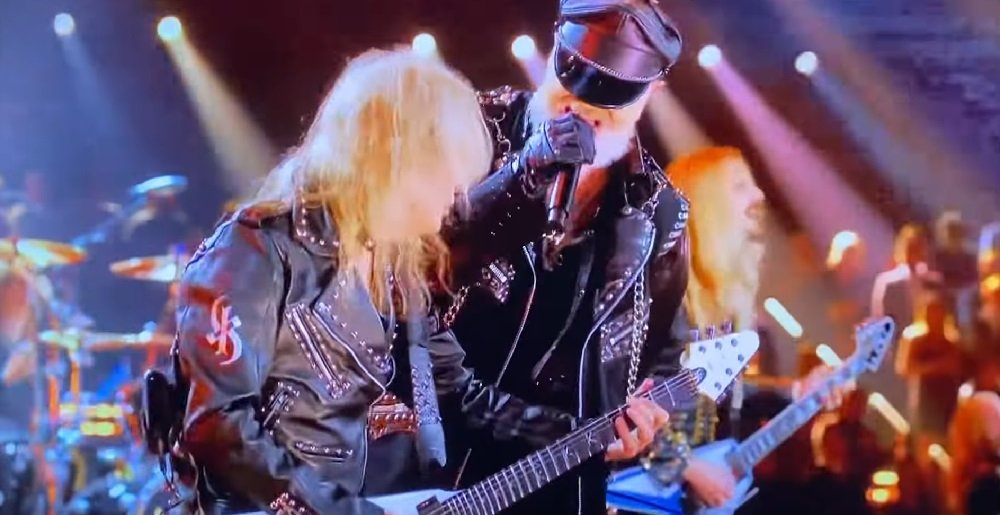 Rob Halford Says Playing with K.K. Downing at Rock Hall “Felt Like He Was Always There”

When the Rock and Roll Hall of Fame induction ceremony took place last month, we in the metal community were treated to a special performance from the one and only Judas Priest as they were finally inducted. Not only would the regular lineup take the stage and quickly rifle through some of their greatest hits, but former drummer Les Binks and (previously) estranged guitarist K.K. Downing joined the band on stage as well.

It was a huge induction party and for seven or eight minutes, whatever rifts existed among the band members evaporated — especially the hard feelings that existed between Downing and his former bandmates.

While speaking with the San Antonio Current, legendary frontman Rob Halford said the brief moments he got to spend with Downing on stage and behind the scenes were pleasant and familiar.

“I think we should let the music speak for itself, really, because as you’ll see from the performance — I think it’s going to be on HBO soon — you’ll see that all of that other stuff is irrelevant. All the things that have been said and suggested just float off into the air. What matters is what’s going down on that stage at that time you’re performing together. And there he is on my right-hand side.

“It just felt like he was always there. Look behind me and there’s [’70s-era PRIEST drummer Les Binks], and the memories just are overwhelming. But, more than that, you’re focusing on the moment that you’re back together again and playing live. It was really a whirlwind. We were in each other’s company for a very, very short space of time. We had very little time to communicate. But for the purpose of the induction of the Rock And Roll Hall Of Fame together, it was absolutely crucial that K.K. and Les were there.

“They were inducted, they needed to be in the room. And more than that, we were thrilled that they took the opportunity to say, ‘Yeah, we’ll come and jam on stage again with you guys.’”

Downing left Judas Priest back in 2011 after complaining of an internal conflict within the band, poorly run management, and what he believed was a deteriorating live performance. When he left, he reportedly sent two resignation letters, with the first being mostly cordial and the other ripping specific individuals who he felt contributed to his frustrations.

Though we shouldn’t look too deep into this as a possible statement of intent to get him back in with the band, especially since they already have Richie Faulkner manning Downing’s former position on the band, it’s good to know that whatever acrimony existed may finally be water under the bridge.

Sponsored Links from Across the Internet
Show Comments
Related Articles
Metal Legacies 0
Watch Judas Priest FINALLY Make It Into the Rock and Roll Hall of Fame
November 7th, 2022 at 8:19am Hesher Keenan

Run for your lives…

Metal Sucks Greatest Hits
250 -
Worst Year Ever: All of Our 2011 Year-End Sh*t in One Place
0 -
Has Moshing Turned Into a Form of Bullying?
0 -
Dave Mustaine Mourns the Loss of Twinkies, Endorses Secession
0 -
Video: Rings of Saturn Guitarist Lucas Mann’s Criminal Abuse of Guitar Pro
0 -
The Red Chord’s Guy Kozowyk is a Police Officer Now
0 -
Website Photoshops Dogs in Place of Bass Guitars Because Why Not?