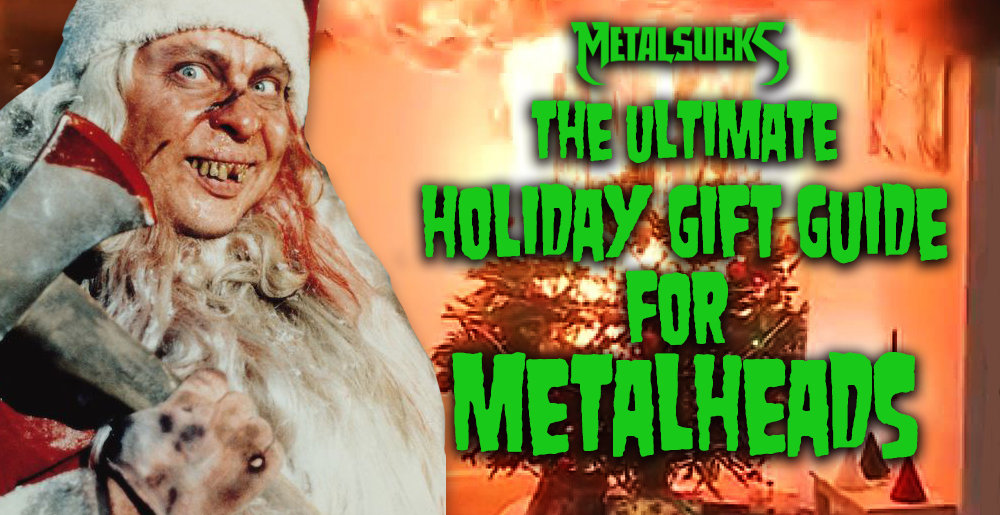 Finding gifts for you family and friends every holiday season is stressful, but it doesn’t have to be, especially if they’re a metalhead: just browse our handy-dandy guide to some of the coolest items and best deals available from around the metalsphere and beyond! Apparel, music, instruments, electronics, booze, it’s all here — so take a look and see if anything strikes your fancy.

Metal fans should be no strangers to Funko’s increasingly-popular line of toys; they’ve already done ones for artists like  Metallica, Guns N’ Roses, and Rob Zombie. This year they added some more popular metal musicians to the line, including members of Slipknot, Slayer, and Ghost.

Spanning more than a decade of the band’s history and featuring some never before released vinyl pressings, this set is practically a cinder block of sonic punishment that any Deicide fan will want in their collection. The set is comprised of seven albums in total, including the first-ever pressings of In Torment In Hell, Insineratehymn, When Satan Lives. North American fans will also be excited to see Serpents Of The Light and Once Upon The Cross make their way onto vinyl for the first time in the region. It even includes the split EP Feasting the Beast with Amon Amarth. This massive set is limited to just 300 units, so it’s not going to last long. Oh and you’re going to want to let whoever you’re giving this to that they’ll get it by February 17, 2023.

Now through December 31, fans can get select vinyl releases for $19.82 (both single and double LPs), as well as various merch, box sets, and other items for up to 50% off at the official Metal Blade USA store. Discounted releases include some killer offerings from bands like Amon Amarth, Behemoth, Between The Buried And Me, Corrosion of Conformity, King Diamond and many more!

What better way to upset your conservative relatives than a holiday sweater that says “fuck” or has a pentagram on it? This may be the first year in a while that it’s felt relatively safe to see Granny in person, but that doesn’t mean you can’t rile up your family with some delightfully inappropriate ugly metal sweaters.

Back when things were locked down and everything sucked more than they do now, there were zero concerts going on. Thankfully, bands took to the internet to play and among those bands was The Black Dahlia Murder. Fronted by the late Trevor Strnad, they put on a hell of a show that even featured a guest appearance by the most lovable man in death metal, George “Corpsegrinder” Fisher. Earlier this year, the band released “Yule ‘Em All: A Holiday Variety Extravaganza” as a DVD, so you can watch the holiday festivities whenever you want.

“WAKE UP!” Randy Blythe screams on Lamb of God’s “Memento Mori,” and this coffee, named after that very song, will certainly help you do that! A collaboration between Lamb of God‘s Willie Adler and Between the Buried and Me guitarist Paul Waggoner’s Nightflyer Roastworks, Memento Mori is grown in El Salvador and roasted in Charlotte, NC.

Does the metalhead in your life love tea? Then the folks at Satanic Tea Company have the perfect gift box for them. Packed with one of the company’s classic teas, a tea infuser, and a happy little mug that says “Drink Tea Worship Satan,” it’s the perfect little collection for that tea-guzzling thrasher in your life.

Inspired by the British band’s half century of metal, this officially licensed candle set features a gold-emblazoned look and includes a keychain.

FINALLY, you can take a bath with Abbath! Or King Diamond, Papa Emeritus III, Dani Filth, Euronymous, Dead, King Ov Hell, or a number of other infamous black and occult metal figures.

The greatest heavy metal movie trilogy of all time is complete at last! Now you can gift all three films for one convenient price. In addition to the physical Blu-rays, you can free digital downloads of all three movies, too, for those times you’re too lazy to get off the couch and just wanna start streaming something. EXCELLENT!

Confess: The Autobiography by Rob Halford

One of the greatest metal singers of all time tells all in his memoirs, first published this past September.

Rust in Peace: The Inside Story of the Megadeth Masterpiece by Dave Mustaine

This tell-all about the making of one of the most revered thrash metal albums in history was also released this past September. Some of the stories it holds have been disputed, which is probably par for the course for a gossipy book like this one. As a bonus, it has a foreword by Guns N’ Roses guitarist Slash.

Daughters of Darkness by Jeremy Saffer

This coffee table book from one of metal’s most respected photographers is described as “a photographic love letter to the iconography of black metal and doom” via “a collection of fine art portraits of women in corpse paint.” There are various editions, natch, depending on how much you wanna spend.

Co-authored by MetalSucks alum Axl Rosenberg and Chris Krovatin, Hellraisers takes you on a journey through the history of metal from its earliest roots with Led Zeppelin and Black Sabbath to its popular modern incarnations. The book features cover artwork by Mark Riddick, a forward by Trivium’s Matt Heafy, exclusive interviews with members of Cannibal Corpse, The Obsessed, Killswitch Engage, Suicide Silence, Periphery and Coal Chamber, over 200 photos, genre-by-genre playlists and more. From AC/DC and Anthrax to Meshuggah and Mastodon, this hardcover coffee table book will be THE ultimate centerpiece in any metalhead’s living room.

Long-running independent New York City concert promotion company Rocks Off — which in recent years has hosted Every Time I Die on a friggin’ BOAT cruising in the New York harbor, among other awesome shows over the years — has released a line of products to help it stay afloat while the live entertainment business continues to be completely shut down. Aside from helping out an independent live music company for a nominal price, you should buy this because you’ve always wanted to color in a unicorn fucking a dolphin and a pin-up babe with goblins in her boobs.

A Donation to the ACLU made in the name of John Dolmayan, Chris Taylor Brown, Tommy Vext, or the conservative metal musician of your choice

Because the only thing that feels better than being selfless is pissing off irrational douchebags who watch too much Fox News and make latently or expressly bigoted comments.

Are you or someone you love looking to learn guitar? Well, starter packs don’t get much more metal than this Slash-endorsed set. For $349, you get a Les Paul “AFD” Special-II Guitar, a Slash Snakepit-15 Amplifier (with a headphone jack so you don’t bother the neighbors), a custom gigbag with Snakepit logo, Slash signature Dunlop Tortex picks, an instrument strap and cord, and a handful of free eMedia guitar lessons. Not to shabby, eh?

Want a compressor pedal for guitar at a fraction of the price of the big name pedal brands? AmazonBasics makes pedals now (yes, really!) and the delay unit goes for less than $30.

If someone in your live wants to learn how to play the drums but you don’t want to deal with the noise, this electronic drum kit from Roland is the perfect entry point. With an “advanced Supernatural sound engine,” whatever that means!

A guitar player can never have enough spare sets of strings, so why not make sure your special person is all stocked up? Make sure you check with them (or do some stealth research) on what their preferred gauge is before buying, because that’s a very personal choice.

The Orange Micro Dark hybrid electric guitar amplifier head puts great high-gain tones in a simple and very portable package. Based around Orange’s popular Dark series of amplifiers, the Micro Dark offers the same searing gain and tonal versatility as its big brothers, but boasts the same tiny format as the Micro Terror. This mighty mite crams 20 watts into a head about the size of a small lunchbox. If you need a simple-to-use, portable amplifier with huge tones, check out the Orange Micro Dark.

Super7, who have collaborated with Ghost in the past, are back with a new action figure of Ghost frontman Papa Emeritus II, who lead the band from during the Infestissumam and If You Have Ghost cycle from 2012-2015. The 3.75-inch ReAction Figure comes with his Grucifix staff as an accessory.

Coheed & Cambria frontman Claudio Sanchez has teamed up with NECA to produce two action figures based on the protagonists of his ongoing The Amory Wars series, the husband and wife duo of Coheed and Cambria Kilgannon.

Metallica’s own brand of whiskey, created in conjunction with master distiller Dave Pickerell (R.I.P.), was subjected to loud blasts of Metallica music during the aging process inside of black brandy barrels, which allegedly influences the flavor. Meyer Sound has engineered a proprietary subwoofer that amplifies the low-frequency sound waves necessary to get the juices moving. The whiskey is a blend of bourbons, ryes and other whiskeys. Blackened American Whiskey is available at select retailers through the U.S. and for order online, although not all states allow mail delivery of spirits.

Everyone needs a bluetooth speaker. May as well get one with good sound quality — JBL always delivers — and that can withstand the rigors of the beer you’ll surely be spilling all over it while you headbang furiously with your pals.

The perfect way to enter into the world of vinyl, this Audio Technica unit contains everything you need to hook into your stereo or pair of speakers and get started, including a phono stage to boost the signal.

Something we missed? Email us at [email protected]