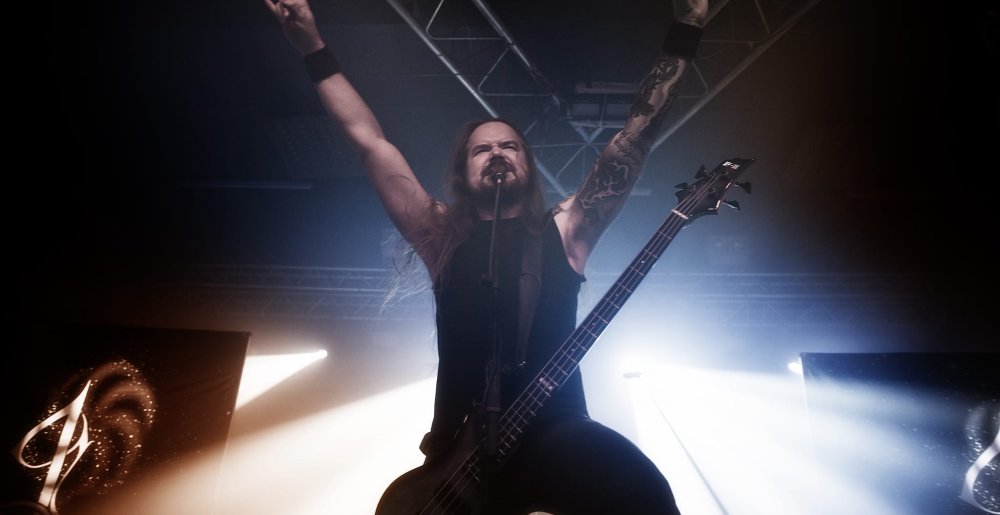 Finnish melodic death metal outfit Insomnium is at it again with its upcoming release, the 17th-century-themed concept album Anno 1696.

Consistently inventive and perpetually pushing the envelope to new stratospheres, Insomnium’s longtime leader Niilo Sevänen is set to deliver what can already be considered one of the most bone-crushing releases of 2023.

Death metal is an oft-misunderstood genre, and Insomnium is no different. But at the core of it all, the band’s high-end instrumentation, and diverse lyrical themes, if nothing else, give new listeners something to chew on as they navigate the murky waters of death metal for the first time.

As he begins to wind down 2022 with an eye for a busy 2023 ahead, Insomnium’s Niilo Sevänen logged on with Metal Sucks to give the rundown on Anno 1696, the band’s songwriting process, his approach to the bass as it pertains to songwriting, as well a message to his haters.

Take me through the origins of Anno 1696.

Anno 1696 is a concept album based on my short story with the same title. And like with Winter’s Gate (2016), the story comes printed in the booklet, at least in artbook and vinyl versions. The 17th century was a very turbulent, dark, and dramatic era. There was a great famine in Finland, and about one-third of the population died in 1696-1697. And back in those days, we were still beheading witches in the north. So, all that gives a proper setting for a metal album and a tragic story.

I already had the rough version of the story in my head around 2019, but then COVID came and messed things up a bit. So, we ended up doing the Argent Moon EP first and then delved deeper into this idea. I wrote the short story in the summer of 2021, and then we agreed that we should make the album with this idea. So, most of the material is composed clearly for this specific story and mood, which is very much like a soundtrack for the tale. Markus Vanhala was the most active member in the composing department this time, and myself, Ville [Friman], and Jani [Liimatainen] assisted.

What’s the progression from Insomnium’s last record, Heart Like a Grave?

Anno 1696 is a concept album and tells this one big story, one big arch. Musically I think this new album is darker and harsher and maybe closer to the style of Winter’s Gate, with many black metal-ish vibes there as well. Soundwise, we really wanted a rougher approach, not the modern, overpolished, and overcompressed sound. We asked Jaime Gomez Arellano to mix the album since he had done great stuff already with bands like Moonspell and Paradise Lost.

What was happening in your life that influenced the songwriting seen on Anno 1696?

I think making the album was the antithesis of the modern world. Escape from the world, really. I much rather spend my days thinking about all the dreadful and dark stuff that happened in the 17th century than all the dreadful and dark stuff happening in recent years. But the story of Anno 1696 and our modern times have, unfortunately, many things in common. Still, many people are easily guided to the wrong paths to doing horrible things while still believing they fight for the right cause. Religious fanaticism, hate, and stupidity are endless resources.

How has the collaborative process within the band evolved?

Each new member has brought their own magic along, so I would boldly state that Insomnium is now more vital than ever. We have four composers in the band, so there is not too much pressure on anyone to deliver those songs. We can pick the very best ideas and riffs. Usually, each composer makes a pretty solid first draft already, and after that, it becomes teamwork in arranging the bits and pieces. Sometimes if a song is not making much progress, it can happen that it is handed over to another dude who tries to finish the job. So we recycle ideas, send stuff back and forth, and try different things until everyone is satisfied with the result. Sometimes time-consuming, but the outcome is good.

That totally depends on the song and the parts there. Sometimes we try both styles and then pick the one that sounds better. Sometimes it can still change in the studio.

Take me through the production of this record and how the final sounds were honed in.

Mr. Jaime Gomez Arellano recorded the drums, but with the rest of the instruments, we used the same studios as before. So, I did my vocals and bass with Teemu Aalto, and the guitarists recorded their stuff themselves. This time we had our good friend Coen Janssen from Epica do the keyboard stuff, and he found the right atmosphere right away. Jaime mixed the album, and Tony Lindgren mastered the final version.

Which songs hold the most meaning to you on the new record, and why?

It is tough to pick just some songs. Especially since it is a concept album, and they all tell the same story. But maybe the longer songs, “Godforsaken” and “Starless Paths,” are the ones that would top the list if I were forced to make one.

Describe your approach to the bass and how it influences your writing.

Bass is seldom the driving force in my songwriting, and I compose my songs with guitar or keyboards. But you can achieve a lot of things in the songwriting process by playing with different bass arrangements, of course. For other guys’ songs, I try to create some good bass lines whenever there is a good spot, but often there is a lot of stuff happening already, so the best way is to deliver the basic stuff and sturdy background. I feel ESP basses and Darkglass Amps are the way to go to that, always.

What do you feel the state of the current metal scene is? Do you feel metal is more popular in Europe than in the US?

Metal is alive and well. It is not mainstream music, which is how it is meant to be. Metal fans are the most loyal and supportive and will keep the scene alive. Musical trends come and go in cycles, and I believe rock will return to mainstream at some point. Quite hard to estimate from Finland how popular metal is in the US at the moment, but we shall soon see that when we tour over there.

Death metal is very misunderstood. Why do you feel that is, and does it bother you?

It is so far away from the mainstream. It really requires an acquired taste and dedication. To the regular geezer, that all might seem like noise and screaming, and all the imagery can be scary; I understand that. Death metal fans should be really proud of their own thing and not think what others might be thinking. This music is not meant for all people! And that is good. We are the inner circle and secret society that knows better. I don’t give a rat’s ass about what the random person on the street thinks of Insomnium.

What are your closing words for both your supporters and your detractors?

I respect and love all our fans and supporters. And I really don’t have time to think about haters. So much whining in the world, and it is impossible to make everyone happy. Just do the thing you really love and keep on going forward.

Their planned November/December run with Omnium Gatherum bites the dust, likely due to Covid-19-related issues.

We discuss the band's new EP, 'Argent Moon,' the timeframe for a new full-length record and more.