Metal Sucks
Metal Sucks Gene Hoglan, Brendon Small, and Bryan Beller are in the... Rob Halford is Just Like All of Us When Jamming to “5...
- Tweet SHARE
Enlarge
Viral Vomit 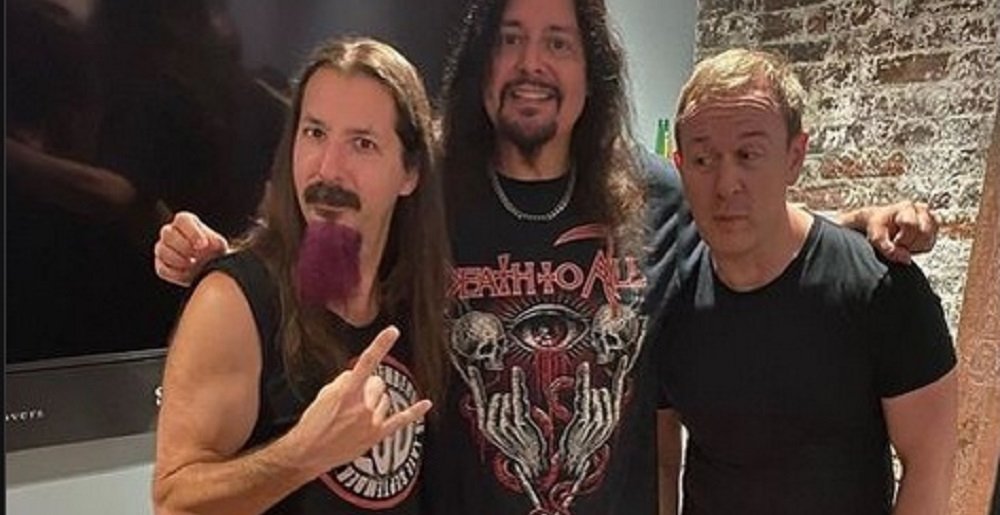 It’s been almost 10 years since Adult Swim proved to be a buncha assholes by canceling Metalocalypse, thus robbing the world of the one thing us metalheads had going on TV. They’ve even gone so far as to poke the bear and make fun of the fact that they killed our boys Toki, Pickles, Murderface, Skwisgaar, and Nathan. But it looks like that all might be about to change.

Just yesterday, drummer Gene “The Atomic Clock” Hoglan posted an image to his Instagram page that showed himself with guitarist/vocalist/show creator Brendon Small and bassist Bryan Beller in a studio with the caption “Great pic.” While we’d be fucking stupid to try to look too deep into the photo, it’s hard not to think they’re working on new Dethklok material. When you consider that Small announced earlier this year that he was working on a final Metalocalypse flick, that would track with those guys getting together and writing some killer tunes to go with it.

Thanks to a 2013 interview with 93.3 WMMR, we learned from Small himself that the new movie would tie up any loose ends left over from The Doomstar Requiem.

“I can tell you… what has already been released, which is that we are making a feature Metalocalypse movie, and that’s what we’re in production on right now. So we’re right in the middle of making the movie, so all the questions that were still lingering after The Doomstar Requiem — a one-hour long rock opera special — are being answered… I don’t wanna say too much about it, but it’s a very big project. We’re all excited to be knee deep in it right now.”

There’s no release date for the film as of now, but Adult Swim did provide a plot synopsis for the movie last year.

“The power-hungry Tribunal unveils their secret and deadly ‘Falconback Project’ as the world grows in embattled chaos and the menacing Doomstar breaches the Earth’s atmosphere while the mysterious and twisted dissent of a band member threatens the future of Dethklok. Picking up directly after the heroic rescue of Toki Wartooth: Can Dethklok choose between their egos and the greater good of the world to embark on a gauntlet of dangers that will try their very souls and finally write the song that will be their salvation?”