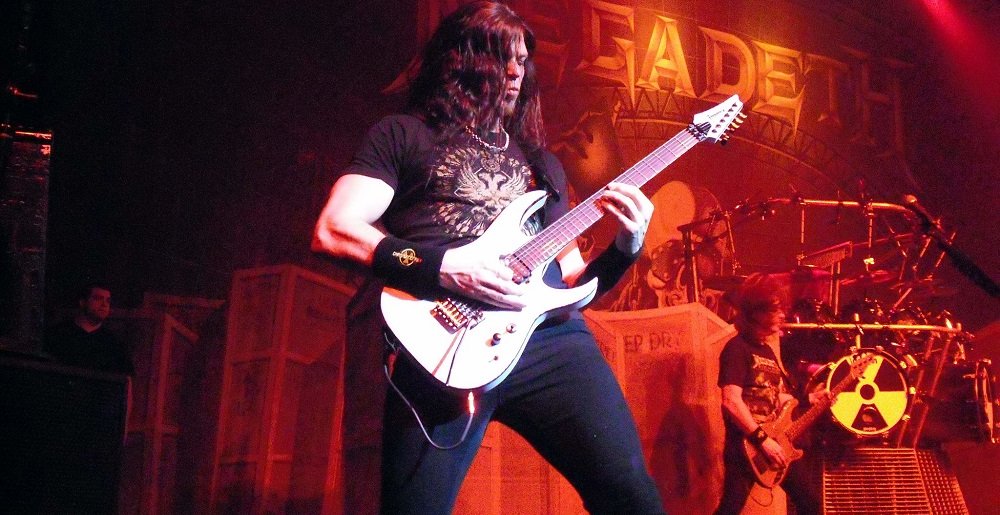 Being a guitarist in Megadeth‘s gotta be one of the harder assignments in metal. Not only do you have to nail down leads written by Marty Friedman, Chris Poland, and the like, but you know the position’s almost always been a revolving door and you’ll have to work with the mercurial mainman, Dave Mustaine.

During a recent interview on Ola Englund’s Coffee with Ola series, as transcribed by Blabbermouth, ex-Megadeth and current axe man Chris Broderick sat down to discuss a range of topics. Naturally, the conversation turned to his time in one of the most influential thrash metal band of all time.

As a band known for its fast and highly proficient guitar play, Broderick said one area that he didn’t ever really take many liberties on was the guitar solos, for very specific reasons.

“Not only, at the time, was I thinking about probably what Dave would want but also mainly, even more importantly, what the fans would want. Because ultimately they are now the owners and the keepers of that music, and they are the people that you’re playing to and that are listening to you. So as cool as I think I can come up with some riff — like, ‘Oh, they’ll love this riff’ — it doesn’t belong in that song at that point.

“So, for me, it’s all about recreating and trying to do [former Megadeth guitarist] Marty Friedman justice — in the case of Marty Friedman or Chris Poland [another ex-Megadeth guitarist] or any of the others. So I definitely wanted to try and make it as authentic as possible. The one thing that you can’t deny, though, is your own sense of phrasing, and for me that comes down to timing and articulation and stuff like that. So, as far as the notes go, I really tried to recreate it as closely as possible, but then with my sense of timing and phrasing — maybe put it my own sense of phrasing.”

Broderick played with Megadeth from 2008 to 2014. During that time, he contributed to Endgame, Thirteen, and Super Collider. Having caught Broderick playing for Megadeth a couple times in the past, I can honestly say the dude’s an absolute best on the fretboard.

Metal Sucks Greatest Hits
0 -
Twenty Hard Rock and Heavy Metal Celebs’ Mugshots
2760 -
Who Are The Top Ten Lyricists?
0 -
BREAKING: Some Local Band Called Shrapnel are Tired of You Leaving the Show Before Their Set
0 -
Unearth are the Slayer of Metalcore
0 -
Will People Please Shut Up About the “Fake Amps on Stage” Debate?
0 -
Twenty More of the Worst Heavy Metal Album Covers of All Time