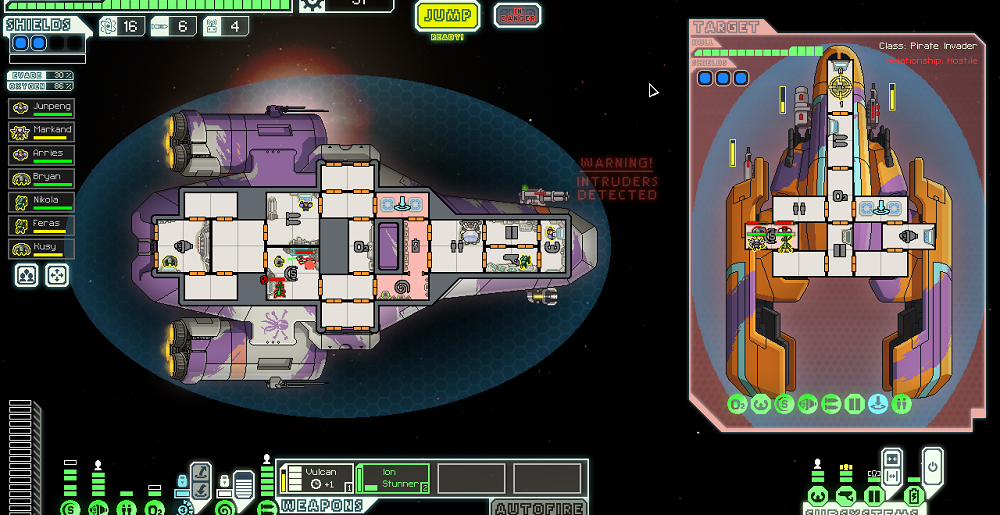 Hallowed Be Thy Game: Every Second Matters In Hardcore Space Sim FTL: Faster Than Light

A lot can happen in space. It’s the kind of frontier where your fortune can change at any second. First, you’re drifting along enjoying the sights; next, a pirate ship hails you and demands your cooperation – and valuable cargo – or else. Do you submit, route energy to your weapons and prepare for a fight, or engage your stealth cloaking system to bamboozle the would-be thieves and escape?

These are the kinds of situations you’ll find yourself dealing with in Subset Games’ acclaimed indie title FTL: Faster Than Light. It’s a roguelike strategy space sim though not in the flight sim sense – it’s actually a little closer to a management sim without the need for a business degree since there’s no spreadsheets, or maybe a real-time strategy game with how you’re expected to move your ship’s crew to respond to problems on the fly and manage resources well. The “roguelike” part is perhaps most important – each attempt at the game is different, randomizing the path to the end and the encounters you’ll, uh… encounter along the way. No two runs are alike, and that’s what makes it so enthralling.

The plot, minimal as it is, consists of you controlling a Federation ship and its personnel who are fleeing from a fleet of rebels out to destroy you before you can reach your friends and pass on valuable data that will spell trouble for the rebels. To do that, you’ll control each shipmate’s movement and placement on your ship. You’ll always need someone at the helm to pilot it, but you can also station people in your weapons bay or shield room to make them charge faster, someone can go in your engine room to give your ship better evasion against enemy attacks, and more. From the moment you start a run of FTL, you’ve got choices to make, but don’t feel married to them – you can freely reassign your crew at will, and you will need to as you progress.

Your primary movement method in the greater canvas of space is FTL jumping from beacon to beacon, working your way to a long-range beacon that can facilitate a jump to a new sector closer to your Federation pals. Each sector poses its own unique challenges. If you land in a nebulous sector, expect the pretty space fog to disrupt your sensors so you can’t easily see into enemy ships that you engage. A pirate controlled sector will surely house more aggressive ships, as will sectors controlled by the Mantis, a bug-like alien race who have had bloody warfare with the Federation for years and won’t take kindly to your presence. Though you can talk yourself out of trouble here and there, it’s hard to “come in peace” when you fly the flag of your enemy’s enemy.

Speaking of alien races, you’ll meet all sorts of them on your travels. The aforementioned Mantis can be hired as crew for your own ship and they’ll come in handy as efficient hand-to-hand fighters should you find yourself boarded by undesirables. Likewise, the android-esque Engi race aren’t great at fighting, but can repair systems and hull damage in a hurry. The radiation green Zoltan race have low health, but can power systems simply by being in the same room as them, no energy from your ship’s reactor required. It really pays off to have a diverse team that you can specialize into handling different situations as they come up, and they surely will.

There’s no Prime Directive in FTL. If (when) you’re forced into a fight, there’s plenty of ways for you to approach it. You can play it safe, cloaking from view (if you have a cloaking system equipped) and charge your FTL drive to jump to a new beacon without fighting. If you want to get your hands dirty, you can blast your foe apart with lasers, missiles, ion weaponry, or beams, all of which have distinct advantages and disadvantages. For instance, a ship’s shields will absorb one volley of a laser weapon whereas a missile will bypass shields and have a chance of blasting a hole in their hull that will cause them to vent oxygen. Employing drones is also a good technique, either to intercept incoming salvos and prevent you from taking damage or go on the offensive to assist your ship’s weapons in breaking down shields and hull integrity. You can also use a teleporter system to board an enemy ship and take the fight directly to them – be prepared to lose some crew if you use this method (don’t worry, you can hire and recruit more throughout your run).

Ben Prunty’s soundtrack for FTL is downright stellar, depending more on spacy synth bleeps and bloops to paint soundscapes that complement the calm setting and action alike. For me though? It’s nearly impossible not to see this game as perfect progressive metal fodder. Some Devin Townsend Project, Avandra, or The Vicious Head Society fit the bill well for floating in the vast blackness of the final frontier and contemplating life. Or, if you want some music as numbingly brutal as the game can be, Cryptic Shift or Blood Incantation usually does the trick.

The game may not look like much at first, but when you start digging into the systems and lore on offer, it’s beyond addicting, simple yet highly unforgiving. The best part is it never feels frustrating, even if you were straight up screwed over by a series of random events. You lose game after game and still feel compelled to retry, maybe adjusting your strategy a bit, or trying out a new ship layout you unlocked to see if you can push your way to the end and nuke the shit out of the rebel flagship. Good luck – I’ve played this game for over 100 hours across several years and I’ve still never beaten it. If you beat it and want a bigger challenge, the free Advanced Edition upgrade to the game adds more complex systems, weapons, ships, races, and options for you to toy with.

If you think you got what it takes to take on a veritable rebel space navy and win (or at least have fun trying), you can buy FTL: Faster Than Light on PC through Steam, GOG.com, or the Humble Store. If you still have an iPad laying around, you can also get it on the App Store as long as it runs iPadOS 8.0 or later. Don’t run out of fuel out there!

Metal gaming in a half shell. Cowabunga!

Children of Morta is a perfect game for nature loving folk metal fans.

SIGNALIS is what happens when you mix anime, horror, and an oppressive regime.