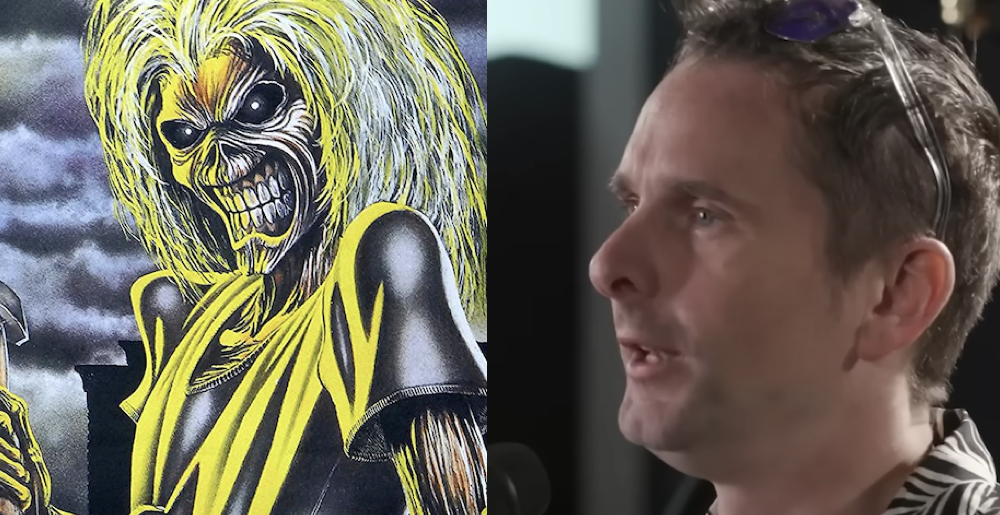 Muse Frontman Matt Bellamy Shares Love for Iron Maiden: “They Are a Band We’ve Always Looked Up To”

British rockers Muse aren’t exactly known for being the heaviest band out there but the band’s singer and guitarist, Matt Bellamy, says they have a lot of appreciation for fellow Brits Iron Maiden. In a new interview with Classic Rock, Bellamy discussed Muse’s new album, Will of the People, and the heavy metal influence on certain songs.

“I mean, metal has always been around for us. When we were growing up we were listening to bands like Iron Maiden. And though we connected more through Nirvana, Rage Against The Machine and the Smashing Pumpkins, we always had this love for eighties metal. Metallica were also a big one for us, but Iron Maiden were the British band and also felt a bit more punk rock in ways.”

Bellamy then explains how he went from Iron Maiden to other metal that quickly got quite a bit heavier.

“The song ‘Phantom Of The Opera’ doesn’t feel as bloated or overtly classical as other metal songs. There’s still something quite angry and scary about it. That’s why Maiden are a band we’ve always looked up to.

“That usage of the harmonic minor scale and the progressive approach to arrangements is something that we share, even if we never sounded like them and live in a different genre. We have a lot of respect for them as musicians, especially Steve Harris, who is one of the best bass players around.

“After that I got into bands like Deftones. I wouldn’t call Rage Against The Machine metal necessarily, but they’re one of my favourites. Someone played me some Gojira a while back and I really got into them. I’m sure some of that crept in.”

In the interview, Bellamy also discusses his appreciation for Yngwie Malmsteen and other rock guitarists, which lends plenty of insight into what makes Muse tick.

Metal Sucks Greatest Hits
0 -
I, For One, Welcome Our New Robot Overlords
0 -
Website Photoshops Dogs in Place of Bass Guitars Because Why Not?
0 -
Metallica’s St. Anger Was Released Ten Years Ago Today
820 -
Rigged: Dream Theater’s Mike Mangini Takes You Through Every Piece of His Mega-Drumkit [Part 1]
0 -
King Crimson’s Robert Fripp & Toyah Willcox Cover “Teenage Kicks”
0 -
Exclusive Interview: Damien Echols of The West Memphis Three on His Life After Death