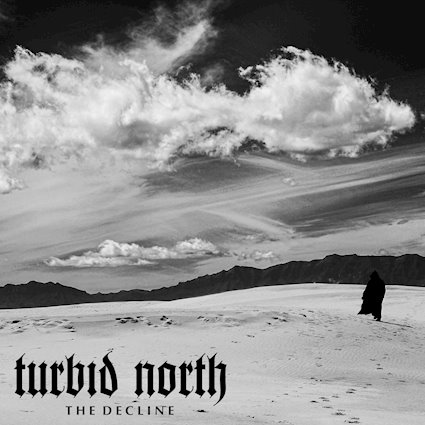 Review: Turbid North’s The Decline Sticks Quite Nicely to Past Guns, Thank You Very Much

Next time you think you’ve made a big sacrifice in the name of metal by staying out late to catch the headliner on a work night, or driving a handful of hours there and back to see your favorite band whose booking agent unsurprisingly won’t book them in your podunk town, or you have excised friends/significant others from your life because they demanded you stop with the record buying/battle jacket/black t-shirt nonsense and “grow up,” turn your thoughts toward Turbid North. After forming in 2001 in the central Alaskan town of North Pole — it’s a real place outside of Fairbanks and, yes, there is a Christmas theme to the entire town — the band made the move to Fort Worth, TX back in 2007 because there’s more musical life in one stretch of that city’s downtown than there is in North Pole, if not all of Alaska.

Turbid North’s musical history has been as adventurously scattershot as their geographic history — why pack up for Fort Worth instead of North America’s literal music city 200 miles south in Austin? — and started in the realm of throttling death metal on their second release and debut full-length, 2008’s Orogeny before taking an outside step towards that old Mastodon/Baroness style of stoner/doom/sludge sound with lots of hardcore punk to boot on 2011’s Eyes Alive. Eight years down the line for a band that has done its own slow burn skin shedding meant that anyone lining up with expectations would probably be wrong to expect anything and shouldn’t be too disappointed to be wrong.

On The Decline, their third self-released full-length (seriously, how is this band not signed?), Turbid North have somewhat surprisingly stuck to the style of their previous album, leaning more towards the mature side of that brand of Mastodon/Baroness thickness with elements of growth in co-vocalists’ Nick Forkel (also on guitar) and Chris O’Toole’s (also on bass) vocal range, abrupt and wildly swinging dynamics, and an attention paid to the details of song flow and trajectory.

“The Eternal Dying” and “The Oppressor” kick The Decline into gear with a wash of robust post-metal doom resplendent with droning vocal lines, echo-y guitars that swarm like a mass of hungry insectoids and an Americana bent that reeks of craggy gorges and whiskey-scented beards. The second part of the album’s one-two opening punch braises that sensibility with more of a massive and imposing feel that includes layered industrialised overtones into the mix. Old heads who’ve stuck with this heavy metal hullabaloo since the early ‘90s should appreciate “Slaves” and its mining of Fear Factory’s Soul of a New Machine and how it references recent Napalm Death albums with a bevy of smart tempo changes all wrapped up in a punishing demeanour via the combined weight of the guitar and bass tone rumble.

“Patients” takes the populist style of grind that possesses and injects appreciable amounts of groove and shimmy (a la Pig Destroyer, Nasum and Rotten Sound) and pulls it down into crater-sized sinkhole of single note reverb-ed doom and vocals based on sustain and baritone that is its immediate follow up, “Drown in Agony.” The weaving of one into the other makes for a harsh transition while making a powerfully diverse statement on an inauthentic world drowning out attempts to live an authentic life.

The intro and interludes in “The Road” may sounds like Annihilator, but beyond those bits of sonic schism is the sort of thunderous melodic thickness that Mastodon used to write back on Remission and Lifesblood where the meat of the matter is rare, bloody and thunderous. On a similar, but more cohesive, tack is “A Dying Earth” a comparatively lengthy, multi-hued instrumental that runs its way through a mournful didgeridoo intro, galloping thrash, sizzling sludge, layered harmonies and monstrous guitar/drum tandems of tribal patterning. The tenth of ten songs is “Time,” which makes reference to the motif that began the album with post-metal delicateness and a storming-over-the-hills rhythmic thumping that caps off the work with a musical circularity and a colossal finishing move consisting of stacked chords strong-armed into a monolithic chord progression that concludes an album that may be obvious in the splaying out of its direct influences, but nonetheless makes for an enjoyable listen of a band that never stops growing, incrementally or otherwise.

Turbid North’s The Decline will be self-released out on January 20th. Listen/watch the video for “The Road” here and order here.

It’s all so oppressive and heavy.

Three week run will traverse America and Canada in January 2017.