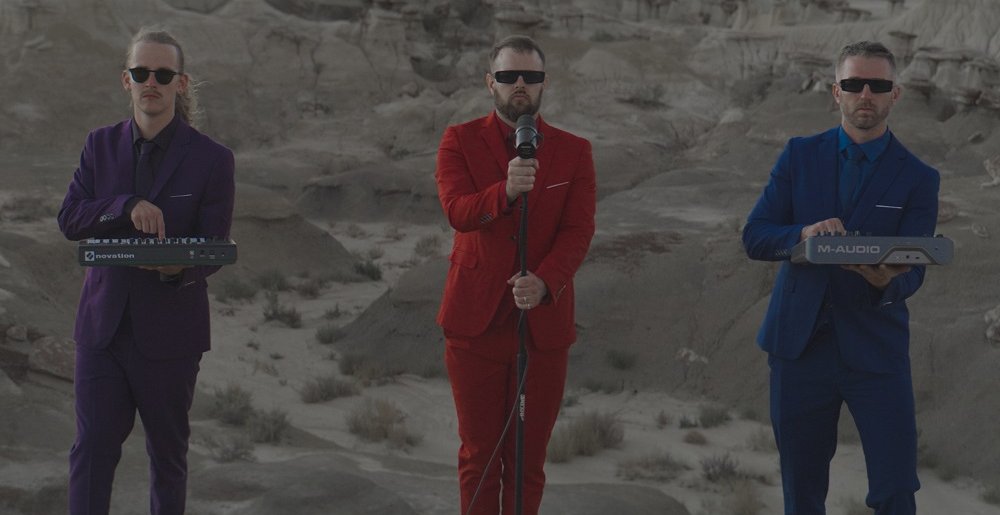 Months after the release of their debut EP Influence, Phoenix, Arizona-based psychedelic rock trio Media have released a music video for their newest single, “Kimono.”

Having spent a decent amount of time checking the track out and marveling at the video’s trippy visuals, all I can say is you have to come for the groove-laden riffs and hypnotic vocals, but you’ll stay for the almost Tool-esque attention to detail.

According to Billy Tegethoff, “Kimono” deals with some pretty heady philosophical topics.

“‘Kimono’ is kind of about the Nietzschean concept of the abyss. The famous quote is something like, if you gaze into the abyss, the abyss gazes back at you. So, the song, lyrically at least, is a dialogue with whatever that abyss is.”

“Kimono” is a track that moves and pulses to its own rhythm. Mixed with the psychedelic LED display made by Tegethoff in the music video, the song could very easily be mistaken for a Tool B-side. It’s meditative and groovy while still being able to blow the doors open with some slow and heavy riffage.

Listening to the track, as well as the rest of Influence if I’m being honest, it seems like the band’s always playing in a unique tonal zone. Almost like they’re tuning to their own frequency from the get-go. And as it turns out, Tegethoff said that’s absolutely the case.

“Sonically, like the rest of the EP, the song is centered around the sound-healing frequency of 528hz. We tuned our guitars and synths up to reference pitch A 444hz, which puts our low C (the drone note for the song) at a harmonic of 528hz. We think it’s a good balance to the driving rhythms and dark lyrical territory.”

According to the band, that 538hz frequency regularly shows up in things like singing bowls and modern sound healing techniques and is “one of the Solfeggio frequencies — a scale associated with Gregorian chants and used in a wide array of meditation music.”

The band says Influence is the first part of a “three-part meditation on the brutality and beauty of being.” Work has already begun on the second and third parts of the trilogy, with the band now in the studio working through the recording process.

“[The three EPs are] about the inner and outer connect and disconnect on the earthly plane, culminating with a tune about the Sixth Mass Extinction event being brought on by the uncontrollable spread of an ‘idea pathogen.’ Sonically, Influence is a heavy but groovy psychedelic whirlwind. With big, sweeping, tom-heavy grooves and lush synthesizers, layered over nasty Rickenbacker bass tones and guitars alternately grimy and soaring, the sound is massive. It harkens a lot of things familiar but adds something new and fresh to the mix.”

Influence is currently out right now and available on popular streaming platforms.

Media are currently working on planning a slate of live dates over the Spring and the rest of 2023. Be sure to keep these guys on your radar. If you’re looking for something cool and new, they might be your aural panacea.

The new song is a kick to the throat.

New Stuff 0
Abrams’ Latest Single “Better Living” is a Sludgy Track that Manages at Times to Soar
October 13th, 2022 at 10:00am Hesher Keenan

You absolutely owe it to yourself to take a few minutes to check this song and band out.

Metal Sucks Greatest Hits
0 -
What Will Happen When a Member of Metallica Dies?
2860 -
What is the Best Christian Metal/Hardcore Band???? [you’re moshing 4 Christ]
0 -
The Top Ten YARLERS of All Time
0 -
Verax’s Terrible “Time Wasters” is a Great Waste of Time
0 -
MetalSucks Readers Declare Pantera The Most Unnecessarily Shat Upon Band in Metal!!!
0 -
Video: Jon Bon Jovi Struggles to Sing “Wanted Dead or Alive” During Last Week’s Raleigh Show