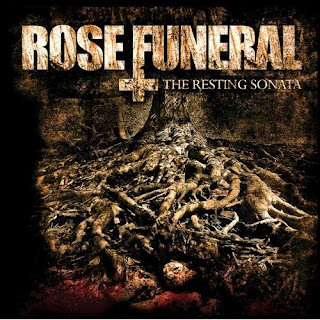 Absolute garbage. It’s taken me a little while to absorb what Rose Funeral’s sophomore effort, The Resting Sonata, has to offer to anyone with a mature vocabulary of metal, and, unfortunately, the answer is resounding: Not a lot. Though I’m aware that I can sometimes hold bands to a pathetically low-standard as long as they are representative of a sub-genre, play tight and have a lot of heart, Rose Funeral is a grand example of a band that is upsettingly unoriginal and, to be honest, creatively flawed.

The single most distracting element of The Resting Sonata – and, admittedly, the overwhelming cause for my dismissal of their music – is their incessant, obnoxious use of breakdowns. They break it down for breakfast, lunch and dinner. There’s breakdowns, beatdowns and fakedowns (the prelude breakdown to an even stompier breakdown). Often times a song will end with a breakdown only to have the sequential track open with a breakdown within fifteen seconds. Additionally ,while some of their “riffs” aren’t rhythmically breakdowns, they still rely heavily on palm muting open strings accomplishing an almost identical dynamic.

The few licks that don’t fall into that mire of identical sounding segments are completely derivative melodic-death/metalcore tremolo stuff. Even worse are the death metal influenced “slam” parts which, much like the rest of the album, seem to have been written exclusively to induce moshing. Sort of like how someone might induce vomiting by trying to stick their fingers in your mouth, Rose Funeral try way too hard to get the desired effect. Once in a while they do manage to stumble upon something cool and reasonably creative. There’s a few scattered harmonies and the odd bit of interesting lead guitar. However, these moments are almost always followed by yet another predictable breakdown – or, in the case of the title track, played on top of one.

The aforementioned sameness of their bursts of mosh riffs is made even less enjoyable by their lack of coherent song structures. Much like many young death metal bands, the general ideas is to reject repetition and to constantly move forward with new sections. This works wonders for bands like Soilent Green, where everything moves swiftly and smoothly enough to be interesting. All the songs off of The Resting Sonata, however, are made completely forgettable because of this. It’s not even worth my time to try and deliver you any track by track analysis. It all sounds the fucking same.

My other criticisms are negligible in the face of Rose Funeral’s overwhelming lack of creativity. The album is heavily overproduced with a clickety-click drum sound and the vocalist goes from high screeches to low grunts with boring repetition.

And Rose Funeral are nothing if not repetitive. They’re sound is that niche that will forever remind me of all-ages shows and low standard, small town scenes. Writing to get teenagers into the pit and being easily adored by them. And I will forget them just as easily.

It wasn’t so long ago, we remember times where life […]

Metal Sucks Greatest Hits
0 -
Twelve Reasons Babymetal are the Single Best Thing to Happen to Metal in the Past Decade
0 -
Editorial: True Loyalty Means Admitting When Your Favorite Bands Suck
0 -
Let’s Gossip About How Much Money Famous Metal Vocalists Make
0 -
Deicide’s Glen Benton Sells Out, Tells Fans to Stop Moshing So Violently
0 -
It’s Time to Stop Thinking of Women in Metal as WOMEN in Metal
0 -
The Best Metal Albums of 2013, As Chosen by Metal Musicians Themselves — Part I: Machine Head’s Robb Flynn