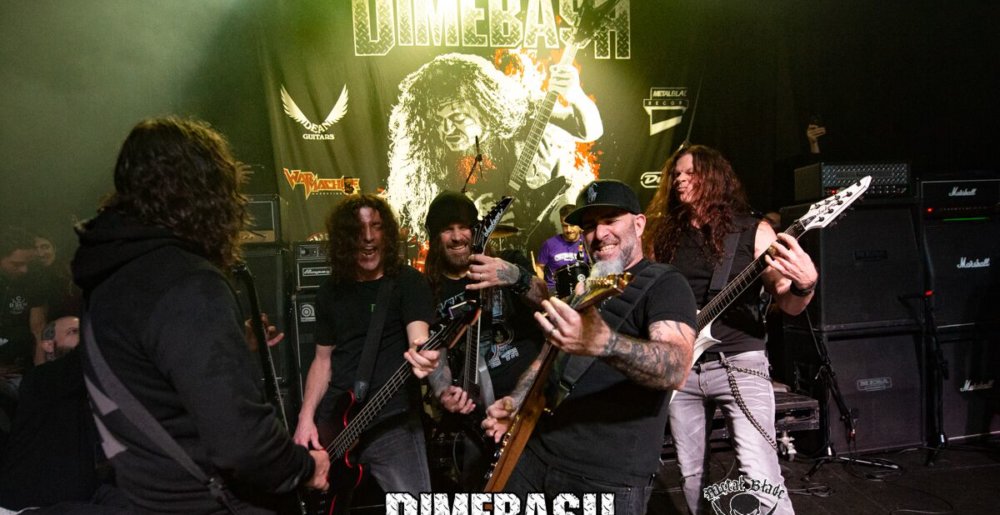 With so many incredible musicians on hand to celebrate the life and work of Dimebag Darrell, there’s no conceivable world in which the annual Dimebash, which takes place in conjunction with The NAMM Show every January, ends up being anything other than a resoundingly successful and action-packed night. This year’s Dimebash, which took place on January 16 at The Observatory in Santa Ana, CA, was certainly no exception!

With so many notable musicians paying tribute to one of the best of all time, it’s incredibly difficult to pick favorites — the whole damn thing was a celebration, and everyone was most certainly celebrating, if you catch my drift. But of the many Kodak moments (err… Instagram instants?), a few very special moments stuck out.

Sebastian Bach, supported by Courtney Cox (The Iron Maidens), Nick Bowcott (Grim Reaper), Jason Christopher (Prong) and Gene Hoglan (Testament, etc.) performing the Cowboys From Hell radio hit “Cemetery Gates” was a sight to behold. Did Baz hit the high notes?, I hear you asking. Well… mostly! Baz takes good care of his voice, the original singer on that track long ago admitted he could no longer pull it off, and I can’t think of a better stand-in for that classic yet rarely-performed number than Baz, whose connections to Dime ran deep.

Another fan-favorite came when Dimebag’s widow, Rita Haney, personally set up 10 floor toms at the front of the stage, then invited several drummers up to pound along to the tribal beats of Sepultura’s “Roots” while a band featuring current Sep vocalist Derrick Green, drummer Roy Mayorga (Stone Sour), guitarist Attila Voros (Tyr, Nevermore, Satyricon) and bassist Tanya O’Callaghan worked through the tune. Metal Injection’s Frank Godla (who has played drums in Silvertomb, Meek is Murder, END, Empyreon and others) got a helluva kick out of jamming the classic Sep cut right beside Dave Grohl and Gene Hoglan! The audience was pumped, and the band was visibly loving every second of it.

Later in the night, three members of Anthrax performed Foo Fighters’ “Weenie Beenie” with Dave Grohl on vocals and, better yet, Scott Ian’s son Revel, just eight years old, on guitar. Revel, you might remember, is a huge Foos fan: last year he joined Grohl and co. on stage for a performance of “Everlong” in front of an absolutely massive festival audience. It’s a treat to watch Revel jam out with his dad and some of the best musicians in all of rock n’ roll, and you can only imagine the thrill he experienced in doing so (or maybe it’s just normal for him?).

With all the star power at Dimebash inevitably comes a bit of celebrity gawking, and this writeup wouldn’t be complete if I didn’t mention some of my own. I met and chatted with Gene Hoglan, a consummate professional and gem of a human being who confessed his love of MetalSucks to me (thanks, Gene, I adore your work, too!). At one point I found myself standing next to Mike Inez but got too star-struck to say hello, a rarity for me after 13 years in this business. And last but certainly not least, there was Chad Kroeger from Nickelback, who bought me and my friends a round of drinks, a story I told in detail here which had us laughing for days and likely will for years. All that’s to say nothing of the dozens of old friends I ran into and caught up with over drinks and riffs, a pastime of which Dimebag himself would most certainly be proud.

I can only imagine the logistical gymnastics necessary to produce an event like Dimebash, so kudos are certainly in order to everyone involved in helping to make it happen. Thanks to their efforts, not only did a thousand or so revelers get to watch a literal once-in-a-lifetime performance and celebrate the legacy of one of metal’s most notorious shredders who was taken from us to soon, but they can sleep well knowing proceeds from the event will benefit music education and animal rescues. Beers up!

Could the New Wave of American Heavy Metal pioneers be plotting a comeback?