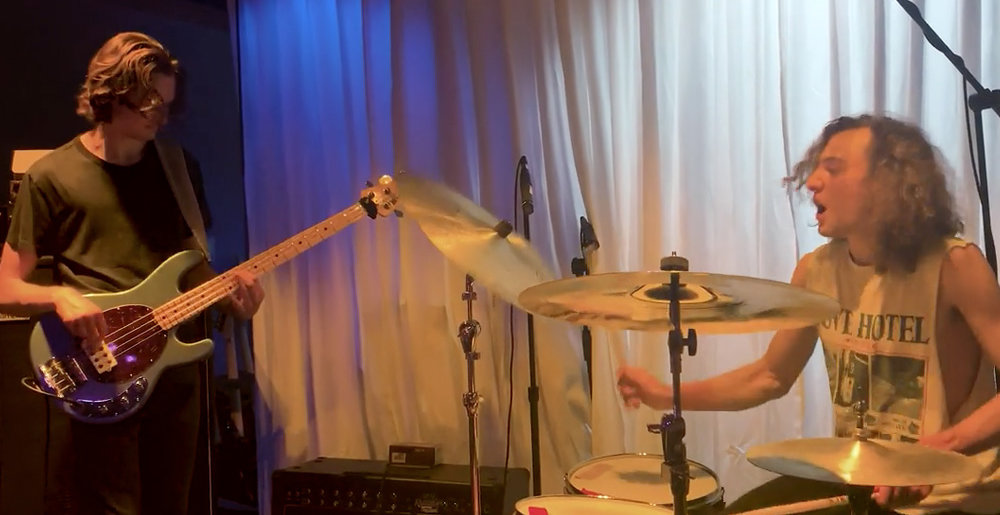 Man, remember that scene in Some Kind of Monster where Lars Ulrich’s son, Myles, gets behind his dad’s drum kit? Remember how everyone was all, “Awwww, that’s adorable!”?

Well, that was a long time ago. Myles is all grown up now (he’s 21), and he’s gotten much better at playing drums. For evidence, look no further than the video at the bottom of this post, which shows him and his younger brother, Layne (he’s turning 19 next week), covering “Eleanor Rigby” by the Beatles. The footage was captured during Lars’ recent hour-long livestreamed video chat with Salesforce CEO Marc Benioff.

Speaking to Rolling Stone about the performance, Ulrich said:

“It was like this insane, three-minute Blue Cheer, crazy, garage-rock version of ‘Eleanor Rigby.’ Obviously, there’s been some incredible versions of ‘Eleanor Rigby’ along the way, but I’m pretty sure there’s never been one that had this kind of sound, this kind of feel, this kind of energy and madness to it. I was like, ‘You know what, boys? You done me proud.’”

Watch the cover below. Fun fact: these dudes’ mom, Skylar Satenstein, also dated Matt Damon, and was the basis for the Minnie Driver character in Good Will Hunting. That doesn’t have anything to do with anything, I just want you all to feel as old as I do.

New Stuff 0
NOT A DRILL: Metallica Have a New Album Coming Next April, First Single “Lux Aeterna” Out Now
November 28th, 2022 at 10:22am Hesher Keenan

Metal Sucks Greatest Hits
0 -
What Will Happen When a Member of Metallica Dies?
0 -
What if Black and Death Metal Albums Were Children’s Books?
450 -
Free Download for Your Listening Pleasure: NYC Sucks, Volume 1, Featuring The Best of New York City’s Metal Scene
0 -
France’s Got Talent, too: Beautiful French Girl Performs Heavy Metal Song on TV
0 -
Deicide’s Glen Benton Sells Out, Tells Fans to Stop Moshing So Violently
2060 -
How Metal Nerds Choose What Bands To Like: A Scientific Model